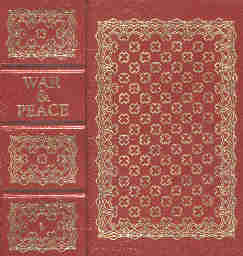 It's a common cliche to bring a copy of War & Peace along on vacation with the idea of completing it. So I tried it — after three days I'd finished over three hundred pages and was feeling good about having read over one-third of the book. Something was wrong, however, and as I looked at the edge of the book, I found that my page marker was much less than a third of the way into the book. I opened the book halfway and found that it was a two-volume book and each volume was over nine hundred pages long. My heart sank as I knew I'd never finish the book in a week's vacation. (I finally finished it a month later.)

Upon finishing the book, I stopped at my favorite video store and got a copy of the movie, the three-and-a-half-hour American version (1966), not the twelve hour Russian version. Audrey Hepburn played Natasha, an obvious casting choice, but who on earth would Henry Fonda play, I thought as I saw the opening credits rolling by. Not Pierre, the key character in the book, whom Tolstoy describes as a tall, overweight and clumsy man every time Pierre appears in the first dozen chapters. But yes, he played Pierre. Fonda, the consummate actor he was, managed the clumsy part, but it was Hollywood's Pierre, not Tolstoy's.

The book is a novel (even though Tolstoy disdains the novel form in the prefatory remarks) about Pierre's individuation. It tracks his journey of transformation from a strong thinking function orientation to a mature adult with a well-developed feeling function. Pierre put himself at risk by wandering around the Battle of Borodino watching and experiencing life close up to find out why men live, love, and go to war. He survived the front line, prison camp, and the falling temperatures of the French retreat march from Moscow and lived to return to Moscow to marry his beloved Natasha.

Pierre's best friend, Prince Andrew, engaged to Natasha after the death of his wife in childbirth, became estranged from Natasha after her abortive elopement with Anatole. Andrew, mortally wounded on the battlefield, watched his friend Anatole die in an adjacent bunk during an amputation of his leg.

Later, during the evacuation of Moscow before the French army, Tolstoy put Natasha and Andrew in the same cortege of carts and they were reunited. Natasha nursed Andrew until he died in her arms. Now Nicholas, her brother, was free to marry Princess Mary (Andrew's sister), and Natasha, of course to marry her Pierre. In the book, both of the marriages were consummated and spawned children and happiness. In the movie we watched Pierre and Natasha walk off into the Moscow sunset, arm in arm.

Tolstoy makes powerful points about war and presages the radical constructivists' view of reality in many ways. He explains that historians construct neat scenarios to explain what happened, then what happened next, etc., but that these tight, rational schemes never existed in the realities of war and peace. Instead men placed themselves in dire situations and took individual actions (sometimes en masse) that are later seen to have been a result of some command or another.

The hero of the invasion and retreat from Moscow in Tolstoy's mind was General Kutuzov. The Russian commander-in-chief refused to allow his troops to fight in their exhausted state after Borodino, saying he preferred to lose Moscow rather than all his troops and Moscow. He withdrew his army beyond Moscow, leaving the Holy city of Russia wide open to the advancing French army. Once inside the Kremlin, Napoleon was abandoned by his army who busied themselves plundering Moscow, and he was trapped by the on-rush of the Russian winter. With supplies dwindling and no deputation from the Russians to sue for peace, Napoleon was forced to abandon a smoldering Moscow. The Russian winter's temperature plummeted to below zero and killed 90% of Napoleon's army during the disastrous trek back to France with Kutuzov's troops on their heels all the way to the border.

Moscow returned to life and was rebuilt by the returning Russians using the same materials with which the French army could not survive when it was only plunder. No better example exists in history of the futility of force in subjugating a people who refuse to cooperate. Nor is there a better example of the short-lived usefulness of plunder on the prosperity of a region. Only the proprietary interest by the returning residents of Moscow could have created a return to a healthy and prosperous city.