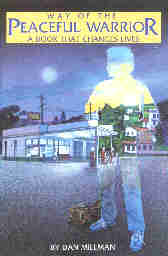 The Way of the Peaceful Warrior by
Dan Millman


A fascinating book, particularly so if you are hearing the anecdotes of the peaceful warrior, "Socrates" for the first time. Unfortunately for me I wasn't. There were one or two that were new to me, such as the story about the old woman, who seeing a mother lion crushed several hundred feet below her on a cliff side, threw herself over the side so that the lion cubs would not die from starvation. The others were re-runs from other books such as the overflowing teacup one. Socrates illustrates this one by overflowing the gas tank of a customer he was servicing, which seems less prudent than spilling a little tea to make a point. On the whole, the retread of the many stories gave the book the flavor of a constructed story rather than a true story as it is purported to be.

The story line is: Socrates is a midnight shift service station operator of non-specified ethnic origin, about 92 years old, when he meets the author. Millman is a student of gymnastics at UC Berkeley. Socrates impresses Millman by jumping to the roof of the station and back down, takes Dan on as a student, and begins midnight to 5 AM lessons. The subjects range from meditation and diet to advanced gymnastics and along the way Socrates is supplanted by a young female athlete named Joy.

When Socrates didn't have a handy story to illustrate a point, he'd grab Dan by the temples in the middle of walking through Berkeley and suddenly Dan would be in another world dying in the middle of the desert, his body turning into dust, years passing by, and then just as suddenly, he'd be back on the street in Berkeley.

Two key coded questions and answers which Socrates teaches Dan: Where are You? and What time is it? The answers are of course "here" and "now" - how did you ever guess without reading the book? If you didn't guess - better read it in self-defense, so you can be ready for the attack of "the peaceful warriors" coming soon to your neighborhood.