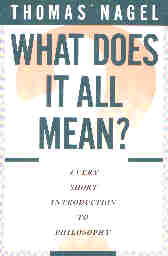 What Does It All Mean?
by
Thomas Nagel
A Very Short Introduction to Philosophy


A little book of philosophy it calls itself (about 120 pages) and it lives up to its name. Nagel covers the major topics of philosophy: mind/body dualism, free will/determinism, meaning of words, justice, death, and the meaning of life. I found the book very useful as an introduction to philosophical issues without the usual concomitant of philosophical jargon. This makes this book accessible to high school level students or laymen who wonder about how philosophers earn a living but have found their writings unapproachable, up until now.

I sped through the book until I got to the chapter on Justice which ended up heavily annotated with my marginalia. His concept of justice seems to include taking property away from one set of people and giving it to another as a way of creating (sic) justice. While Nagel stops short of suggesting a centrally controlled economy (ala Russia), he insists that economic displacement (ala Robin Hood) is necessary to correct injustices in the economic life of citizens.

Taking the academic hard-line, he adheres to the principle of stealing from the rich (taxation) and giving to the poor through various social welfare programs. He ignores the disastrous economic consequences (which we are unknowingly up to our necks in now) of penalizing the outstanding producers to provide an equalization of opportunity. He proposes (by presupposition) the very form of society that Ayn Rand portrayed as collapsing in her benchmark novel, Atlas Shrugged.

In another chapter he discusses a concept of the soul: being nourished by the body, it dies when the body does. Nowhere does he acknowledge the possibility that the body, as we know it, is nourished by the soul and that the body dies when the soul stops nourishing it. Metaphysics students would find his chapters on life and death wholly one-sided and narrow-minded. in spite of these objections, I recommend the book to anyone with a serious or casual interest in philosophy; in fact, reading it may transform a casual interest into a serious interest.