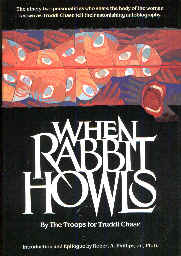 When Rabbit Howls
by
The Troops for Truddi Chase
The Ninety-two Personalities Who Share the Body of the Woman Known as Truddi Chase Tell their Astonishing Autobiography
Published by Jove Books, New York in 1990
Book Review by Bobby Matherne ©2002

When Rabbit howls, everyone listens. Rabbit is one of the youngest personalities of the woman and makes a sound like a dying rabbit. Rabbit was apparently created (or at least the howling part of Rabbit was) when her stepfather stepped on baby rabbits out of cruelty just to hear the rabbits cry. He also stepped on, hung upside down on a rope, strapped to a high chair, threw into a well and performed every imaginable sex act on "the woman" of this book, Truddi Chase. She is referred to in this book by the authors (the Troops) as "the woman." The woman was a later life creation to take the place of two younger parts who died. In the process of creation, the Troops took away her memories and left her simply as an empty shell - a shell who would not be present for the many activities that the Troops handled. The division was so complete that 3 or 4 of the Troops could have a drink and neither the woman nor the other Troops would get drunk. The same was true for migraines, smoking, and many other activities. After one long night of drinking 3 or 4 of the Troops had gotten drunk and she awoke to find a trail of Alkaseltzer coated glasses around the apartment.

Stanley (actually Robert Phillips) is the therapist who coaches her in her recovering of her memories and missing parts. At one point Stanley decides that integration into one person would not be desirable.- That, if the woman could simply control her parts, that is, go into and out of them at will, that would be acceptable. In addition to the long therapy sessions, Stanley tapes them on video and uses the tapes to help others with similar problems.

In the end Ean picks up a manuscript and reads a story of the woman's killing of her stepfather. The story is so real that an epilogue from Phillips is necessary to point out that the episode was not real.