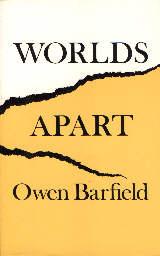 The narrator, Burgeon, is listed in the introduction as a solicitor with philosophical interests. Thus does Barfield describe himself and take his place in the pantheon of discussants at this three day symposium. Its primary aim was to provide time and space where minds that are normally worlds apart might meet to open cracks in the watertight compartments of their belief systems. The earnest hope was that fresh insights might sluice forth upon the arid fields of science. (With Barfield in charge of the entire endeavor there was little doubt of its success.)

Immediately someone mentioned Galileo's primary qualities of extension in space, figure, solidity, and number. His secondary qualities were everything else we perceive. By means of this revolution in thinking Galileo constructed the watertight compartment that came to be known as physics. Along came Newton who rigged up the box with his famous three laws and thereby wound the mainspring of the mechanical universe that ticked its heart out during the Industrial Revolution. Only problem is: Galileo's primary qualities have been shown to be secondary qualities as well by modern physics: extension and shape are a function of velocity (Lorentz Contraction) and solidity is an illusion of the macroscopic world.

The next idol to fall in the symposium was cause-effect. Are they simultaneous? If no, what happens in the moment between cause and effect? If yes, how do we distinguish one from the other? Main stream scientists are not ready for the "leaky margins" that would accompany the realization that attribution of cause and effect are a matter of punctuation and individual caprice.

The main concept of the symposium involved the idea of evolution of consciousness. Having undergone several such evolutions in recorded history, we discount the distortions that result when we interpret pre-evolutionary events with our evolved consciousness as though our precursors thought exactly the same way we do. In other words, as though the evolution had never taken place.