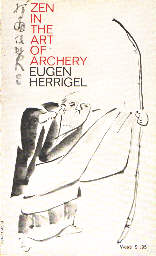 A READER'S JOURNAL, Volume 1
:
Zen in the Art of Archery
by
Eugen Herrigel
Introduction by D. T. Suzuki
Published by Vintage Books in 1972
Book Review by Bobby Matherne ©2002

In this little classic Herrigel takes us inside the workings of Zen Buddhism as he relates his experiences in studying the art of archery in Japan. He chooses archery as a means to study zen upon recommendation by a Japanese associate, a choice that would have else never occurred to him. To the typical bowhunting fan the number of bullseyes and deer killed are the goal of archery and any meditative aspects of the sport are secondary by-products and are rarely discussed. The Japanese man who suggested archery to Herrigel as an introduction to zen, understood that archery, a silent sport, would bypass the usual linear, analytical processes of the educated Westerner. And it did, as this book demonstrates.

On a Western archery range, the four components of archery would be practiced one after the other for many repetitions with accuracy counts of bullseyes charted week after week.

In the Japanese form of teaching archery, several months are devoted to each step, and only when mastered is the succeeding step taught or permitted. Thus Herrigel spent 2 months learning to hold and to draw the bow, then several months learning the hold the bow extended for a long time with his shoulders relaxed, then more months learning to let the bowstring "slice through" his thumb (release without flinching), and only after almost a year is he allowed to actually hit a target. His teacher, however, is the measure of his shooting success, not the accuracy of the arrow hitting the target. Even though the arrow may have only grazed the target, his teacher might say, "There! It shot!" This praise from his teacher was the goal of the training, for it meant that Herrigel had hit that most difficult target of all, himself.