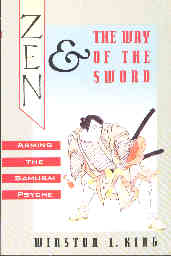 A READER'S JOURNAL, Volume 1
:
Zen and the Way of the Sword Winston L. King
Arming the Samurai Psyche
Published by Oxford University in 1993
Book Review by Bobby Matherne ©2002

The word kamikaze comes from kami - god and kaze - breath. When the Shinto priests prayed for God's intercession during the 13th century invasion by the Mongol hordes, a great wind blew up on two occasions to sink the invading armadas. King tells us:

Kami is usually translated as god; but it also signifies the power or force that, like a static electric charge, was present everywhere in the Holy Islands of Japan. . .

Kami, then, is an ancient Japanese word for the Bose-Einstein Condensate of Danah Zohar's Quantum Self. It was the Japanese name for the living spirit that infused their homeland.

The sword of the samurai (at Atsuta) was one of the three sacred treasures of the Shinto. The other two were the mirror at Ise and the jewels in the imperial palace. The samurai learned to be ready in a split second to split a skull -- and to do so at the slightest hint of trouble. To be ready, he had to keep his consciousness still and quiet as a forest pool or as flawless as a newly silvered mirror, so that any signals coming in were sure to be from his surroundings and not noise from his culture-cluttered conscious. One episode illuminates the process: a famous samurai warrior was observing his prized cherry trees in full bloom in the serenity and privacy of his estate while his trusted page held his sword for him. Suddenly the samurai went into a defensive posture and, to his embarrassment, found no cause for his alarm. He withdrew indoors to consider this calamity and to question his own sensibility when his page came to him and apologized profusely. The page explained that while he was standing guard as his master was observing his flowering cherry trees, a fleeting thought went through his mind about how it would be possible to catch his master off-guard at that moment.

Zen quickly became the Japanese way of the samurai warrior, whose very life depended on his instinctual-visceral nature. Other forms of Buddhism were filled with too much of the rational-logical for the warrior. In Zen they found a meditational process that aided their battles and an ethical process that did not limit their options.

Read this book for the history of Zen, of Japan, of the samurai, of the sword, of the living Japanese psyche that survives palpably to this very day.