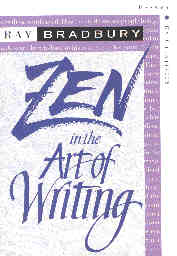 A READER'S JOURNAL, Volume 1
:
Zen in the Art of Writing
by
Ray Bradbury
Published by Joshua Odell Editions in 1994
Book Review by Bob Matherne ©2002

"We are cups constantly and quietly being filled. The trick is knowing how to tip ourselves over and let the beautiful stuff out." Letting the beautiful stuff out is like an archer releasing a bowstring so that his soul flies straight to the target as Eugen Herrigel explained so eloquently in his "Zen in the Art of Archery." As the use of the title indicates, Bradbury's writing borrows freely from other authors.

When Bradbury was sent to Ireland by John Huston to write the screenplay for Moby Dick, he couldn't wait to leave the country. Only years later did he find himself recovering the images and magic of Ireland in stories and plays he wrote. He likened the literary process to Perseus confronting Medusa. If he looks at her straight on, he will be petrified and unable to speak, but if he observes her by reflection, Perseus is able to act. Thus also the literary act is one of reflection and the amount of time required for the reflection will depend on the depth of the image. For Gertrude Stein it took fifty years before the image of the little drunk girl in the slums of London to surface as a search for Gertrude's own identity. In Bradbury's book he describes the various time delays of raw images and the books he created from those images.

"All arts, big and small, are the elimination of waste motion in favor of the concise declaration." This book has little wasted motion and is filled with firecrackers of insight exploding 4th of July all over the lawn.

Like how he approaches creativity by treating ideas like cats. "You make them follow. If you try to approach a cat and pick it up, hell, it won't let you do it." But walk away and the cat follows you thinking, "Well, what's wrong with you that you don't love me?"

Truly Bradbury is a living demonstration of Kahlil Gibran's famous phrase, "Work is love made visible," as he pours himself, his poetry, imagination, and love into his books — including this one.