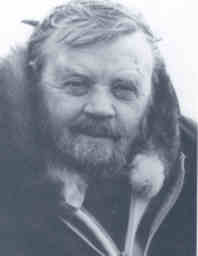 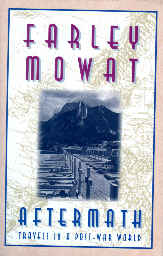 A READER'S JOURNAL:
Aftermath
by
Farley Mowat
Travels in a Post-War World
Published by Robert Rinehart/CO in 1996
A Book Review by Bobby Matherne ©2001

I first read Farley's Never Cry Wolf about 1968 and feel in love with his writing style. If you've only seen the Disney movie and never read the book, you have a treat in store. The humor of his writing never really made it into the movie. It was with great pleasure that I acquired and read this new book of his. I had thoroughly enjoyed Woman in the Mist about ten or so years ago and reviewed it for A Reader's Journal. Mowat is at his best when writing about nature subjects, so I was most interested to see how he would handle that most curious of nature's creatures: man himself. This was his subject for this book: man's inhumanity to man as it shows itself in war and its aftermath.

As I read his travelogue, I found myself thinking at times that I was reading Eric Newby instead of Farley Mowat as their styles are both wonderful and easy to read. They find the most interesting points of their travels and array them like appetizers on a plate for the reader to savor and digest at their leisure. And yet Farley was never far from the animal kingdom, always willing to take side trips to a wildlife sanctuary, a water fowl reserve, etc. While he reveled in the thousands of birds at the Severn Water Fowl Trust that congregated around him and his wife at all sides, one goose even nicking his finger, he planned his trip to just miss the human equivalent of many species of birds congregating in one place at the coronation of Queen Elizabeth II. In the spring of 1953 they began their itinerary through postwar Europe on the continent first and ending up on the British Isles while the post-coronation clean-up was underway.

Here's an early sample of his writing in which I learned that the barley that goes into a brew is a living organism. Drinking a brew made of barley is similar to using stem cells from a human embryo: teeming life is relegated to become the raw material for a useful product. Isn't there an organization to protect the innocent plants that are killed and sacrificed to the ravenous appetities of vegetarians and boozers?

[page 14] The barley starch was inert and insoluble until the maltster tricked the barley germ into performing a miracle for him. Having steeped the grain in warm water for fifty hours, he spread it on the uneven stone floor of the malt house. Embryo cells then began to stir, multiply, and secrete an enzyme that slowly converted the starch to sugar. The process took ten days, after which, having served the maltster's purpose, the embryos perished in the heat of the kiln.

Farley was welcomed everywhere as a hero of the war, and people were very willing to share their memories with him. All but in Vercors, in the Alpine region of France. No one would talk to him about the war. He kept digging until he found out the horrors that the people had been subjected to during the war. Vercors was the heart of the French resistance as the Alpine peaks of the region provided a natural fortress from which the maquis or guerilla forces of the resistance could enfilade German troops at the lower elevations. These tactics led the German commanders to take reprisals on the citizens of the village whose relatives were fighting from the heights. In this passage, Mowat tells how one group of village men volunteered for service in the resistance while protecting their families and friends: they arranged to get taken prisoner by the forces they wanted to join, the maquis!

[page 62] There were less violent incidents. The garrison of Vichy gendarmes stationed in the village of Saint-Marcellin on the Isère River decided to join the Vercors army. However, they were local men and knew their families would be subjected to severe reprisals if they deserted. One of them thought of a way to deal with the problem. A message was sent to the maquis suggesting that an attack be made on Saint-Marcellin on a given night. Although the garrison would put up a spirited defence, they would be firing into the air. The attackers were expected to be equally thoughtful. On the appointed night frightened townsfolk cowered in their cellars as gunfire rippled through the streets. The gendarmes fought so valiantly before being "captured" that their bereaved families were given extra rations by the grateful Vichy authorities.

Farley and his wife drove over the Alps in their tiny Hillman Minx convertible and stopped off to see the original home of the famous dogs that Father Bernard had housed in an elevated pass, the St. Bernard dogs, fabled rescuers of human life in that forlorn pass. The dogs were local dogs with a good nose for sniffing out humans under many feet of snow. Never more than six or seven dogs were kept in the pens at any one time, but they saved many people from the middle of the 17th Century until today.

Finally the Mowats arrived in London to see the lemming-like migration of decoration trippers who created massive gridlock city-wide in their endeavor to see the coronation decorations before they were dismantled. A friend of theirs recommended:

[page 176] "Take yourself off to the Cotswolds. It's our favorite part of the world, and, Lord knows, we've seen the lot! Make for a little place in Gloucestershire called Wotton-under-Edge and when get there put up at the Swan. I'll call ahead and let them know you're coming. From Wotton you can hare around in any direction and see Old England au naturel, not all tarted up for trippers. A hop back into early days might be just what the doctor ordered."

The Mowats end their trip in Wotton (pronounced Woo-ton) and the surrounding area. They visited several large estates that have been built, abandoned and rebuilt many times, the largest of which was called the Woodchester House. To give you an idea of the scale of the House, a cottage was built as a temporary residence while the House was built. The Cottage has over thirty bedrooms. The House has a full-size church inside it as a chapel, for example. And it was never completed. Room after room of partly completed stone work lies just as if the stone masons had walked off the job yesterday. That was over a century ago.

Farley visited Woodchester after being given the following choice (page 204), "Farley's End or Woodchester. Which'll it be?"

"Actually not much to see. Maureen thought you might like to take a gawk anyway, in case you wanted to reserve a plot in their parish cemetery." He passed on that choice.

And in the end Farley wound up in Peter's water fowl sanctuary on the Severn River where he felt at home with the wild birds of hundreds of species from all over the world who would drop in out of the skies for a visit on any given day. Peter had a unique approach to protecting his preserve from poachers: he gave every known poacher of the region a membership in his Waterfowl Trust. He turned them from poachers into protectors in one fell swoop.

From protecting wolves, to saving gorillas, to preserving water fowl, you can expect that if you're involved in wildlife protection, sooner or later Farley and his wife may tool around the corner in their Minx convertible to have a see.