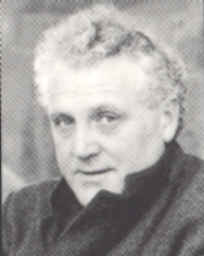 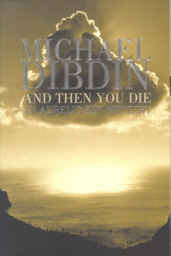 A Book Review by Bobby Matherne ©2004

The existentialist's plaintive refrain, "Life's a Bitch and Then You Die," is the origin of the title, but no one in the novel seems to ever catch the joke. Two reasons: one it appears on a T-shirt as "Life's a Beach, and Then you Die," and two, the phrase is translated into Italian. The result of the translation is that the humor is lost and it appears to be some weird American humor, which it is, actually, but the idiomatic humor of it is completely lost on the Italians who adopt it for their T-shirts. But it serves as an apt title for this mystery novel which begins with a man being murdered as he lay on an exclusive beach in Versilia, Italy.

This brief episode would fit nearly into the current fad of dramatic scenes preceding the roll of opening credits for movies. Imagine that the planned construction of a bridge over the Straits of Messina separating Sicily from the mainland had been completed and Dr. Aurelio Zen, our detective hero, was being driven over it by his chauffeur.

[page 3,4] [Aurelio Zen] . . . was in the middle of it, speeding away from Sicily, back to the safety of the mainland. The bridge itself was not the graceful suspension span which the real-life engineers had designed, but a rusty old wrought-iron girder affair originally designed to carry a railway track, now fitted out with a makeshift roadway in the form of wooden planks. The car Zen was riding in was also a period piece, a huge prewar convertible with bulgy cartoonish curves driven by a grim-looking uniformed chauffeur wearing aviator goggles. 'This is a dangerous road,' he muttered melodramatically. Zen took no notice. He was enjoying the bright sunlight, the invigorating breeze, the faint cries of the itinerant watermelon vendors on some distant beach.
They were going so fast that when the gaping hole in the planking appeared dead ahead they were almost on top of it. There was no time to brake, so the driver accelerated and the car leapt the gap, landing on the very edge of the further side, its rear wheels dangling over the void. Zen and the driver scrambled out just as the vehicle tilted back and slid off the edge of the planking. It was only now that Zen realized that there had been a third person in the car all along, a young man sitting in the back seat. He was neatly dressed in a suit and tie and seemed perfectly calm. The only odd detail was that his chest and feet were bare.
But Zen had no time to think about this, for no sooner had the car disappeared than other cracks and cavities began to open up in the surface of the bridge. It had been designed to withstand an earthquake stronger than the one that had leveled Messina in 1908, but this one must have been stronger still. Whole sections went tumbling down into the water far below, until the only one remaining was the short length where Zen was perched, and it too was now growling and shuddering beneath his feet. But the cardinal rule of these dreams was that the hero always emerged unscathed, and at this point the director — clearly out of ideas about how to save him this time — brought the episode to an abrupt end. The screen went blank as Aurelio Zen woke up.

And when he woke up, he was on a beach in Versilia where nothing much changed or happened on any given day. Every patron went to an assigned private lounging spot to catch some rays. The man who was murdered on this day happened to be in the spot where Zen would have napped, had this interloper not taken it first.

Zen was a detective who had just left the hospital after a failed car bomb attempt left him wounded. He only found out about the beach murder after he left the scene when the police showed up to question him. He was in a witness protection program of Italian design and was shuffled off on a plane flight to America, which itself was diverted to Iceland because a man in his assigned seat on the plane died en route. Another murder attempt happens on the ground, and once more Zen is shuffled back to Italy, and he seems to get further and further from doing any detective work on all these murders, all the while trying to keep himself alive.

This is a fast read. I liked Dottoro Zen's character, his meeting with strange characters, such as the huldufolk of Iceland, who lived gnome-like in rocks and crevasses, whom only special people like Zen can see. He claimed to never wish to travel to any country not conquered by Rome at some time, such as America, about which he rails thusly:

[page 52] Why waste a lot of time going to some foreign coutnry where they used funny money, spoke some barbaric dialect, and couldn't be relied upon to make a decent cup of coffee, still less know how to cook pasta properly? It was a stupid idea, however you looked at it. And if the foreign country in question was on the other side of the Atlantic Ocean, it became quite literally insane.

The story is full of interesting advice and comments. This is one of my favorites, which can be analyzed to be a corollary of the Peter Principle which states that people rise to their level of incompetency.

[page 107] "You know that saying about generals? That they're always superbly prepared to fight the last war? It's not just generals, it all of us."

The foreign phrase from which the title comes is "La vita è una spaggia e poi si muore." Let's close this snapshot of Dr. Zen peregrinations among the Roman Empire with his thoughts on the phrase.

[page 121] "Life's a beach and then you die." Absurd. Another piece of dream jetsam with no significance. People would buy clothes with any nonsense on them as long as it was in English. For all they knew, they could be walking round sporting a shirt or jacket which said "I'm a Complete Idiot." It didn't matter. English was chic.