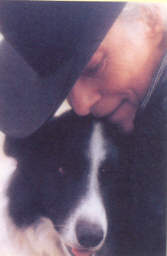 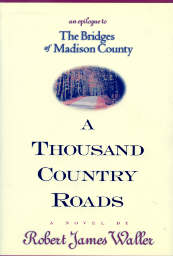 A Thousand Country Roads
by
Robert James Waller
An Epilogue to 'The Bridges of Madison County'
Published by John M. Hardy/Tx in 2002

The first sentence of The Bridges of Madison County laid the groundwork for its own Epilogue.

[page vii] There are songs that come free from the blue-eyed grass, from the dust of a thousand country roads.

This was an interesting book to read from a writer's perspective. "The Bridges of Madison County" ends with the death of Francesca Johnson and the reading and execution of her will. She asked to have her ashes scattered at Roseman Bridge without specifying why and her grown children were puzzled until they found her letter to them which shared a secret that we readers knew all along. The covered bridge called Roseman was where she first met and fell in love with Robert L. Kincaid, the peregrine photographer who stayed for three or four days and moved on. He asked her to travel with him, to leave behind her beloved husband of many years, her farm and her children, but she decided to stay behind with them till the end of her life, at which point she wished to be re-united with Robert, as indicated by her last wish.

We pick up the thread of Robert's life in Seattle sixteen years after his meeting Francsca at the Roseman Bridge. He's living in a shack outside Seattle and still listening to Nighthawk Cumming's mellow jazz tenor sax trillings on Tuesday nights in Shorty's smoky milieu. His only companion for road trips and conversation is Highway, his golden Lab, outside of Francesca, who seems to haunt his thoughts. We listen in as Francesca in Iowa thinks of Robert and what might have been and Robert reciprocates in Washington. Our attentions perks up immediately when Robert and Iowa heads out on a road trip to Iowa in Harry, his green 1952 Chevy pickup. The last cowboy with his last pickup and his last dog on a last road trip  a tale of last things.

Meanwhile Wynn in Mendocino, California is remembering another road trip in 1945 with a younger cowboy just back from the Pacific where he risked his life to take photographs of landings at Tarawa and other Japanese-infested islands. With her cello and a picnic basket she rode behind the cowboy on his Ariel motorcycle and played Schubert for him on the beach as the sun set into auburn clouds over the Pacific Ocean. Three or four days later they parted and she was left with memories and a son.

In 1981 South Dakota, Carlisle, her 36-year-old son, is restoring old houses, preferring restoration to the mechanized paperbox construction of the suburban housing developments. He has begun his quest for the Father element in his life, something that Rudolf Steiner writes happens to each of us around the ages of 36 to 42. Born without knowing his real father, Carlisle grew up with a loser of a step-father for six years that his mother finally left, opting for single parenthood instead. Here's how the author informs us of Carlisle's becoming aware of the Father element. It is a tapping from another world, the Raven of Poe, the dark symbol of the first level of initiation into the spiritual world, the rap-tap-tapping on his psyche:

[page 28, 29] And there was the tapping. That's what he called it. It had started early on and stayed with him over the years. Something way back and far down, source unknown. Blinking signals, faint and distant, maybe from spirals of DNA, coming when there was a stillness in him, feeling the signals more than hearing them. As if something furred were playing with a dusty telegraph key in a ghost-town railway station: tap... pause... tap... pause.. tap, tap.. repeat sequence.

About the time we wonder what Wynn and Carlisle have to do with Robert, the author leads us to see that Robert was that young cowboy on the Ariel motorcycle who unknowingly fathered a son during the picnic and the Schubert serenade on the beach by Wynn, the lithe cellist. Suddenly Robert's last road trip with Highway and Harry takes on two shadowy passengers in addition to Francesca, namely Wynn and Carlisle. In addition to the syzygy of Robert and these two women  which one or both will he meet in the course of the book?  there is Carlisle who is searching for his unknown father using only the barest shreds of memory from his mother: an Ariel motorcycle, a war-time photographer named Robert, and orange suspenders.

As a writer, I mused over what form might the meeting with Francesca take  whatever happened between Robert and her could not alter the ending of the story in the first book, a fact that set stringent limits on what might happen if they met at the Roseman bridge once more. The meeting with Wynn and Carlisle was also pregnant with possibilities and poignancy, but since the impact of that meeting was outside the scope of the first book, its parameters offered greater freedom than the meeting with Francesca.

Delicately Waller unwinds the tale and the reader will not be disappointed by the ending. The book whose title came from the first sentence of the first book, ends along one of those thousand country roads as the peregrine cowboy comes to rest at last with one of his beloveds.