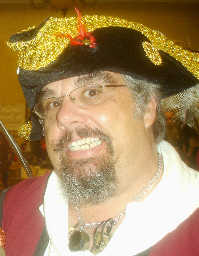 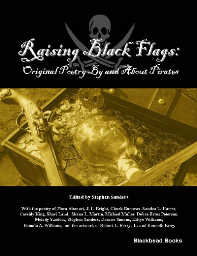 Raising Black Flags
Original Poetry By and About Pirates

ARJ2 Chapter: Reading for Enjoyment
Published by Blackbead Books/TX in 2008
A Book Review by Bobby Matherne ©2008

"Avast, me Hearties! Grab ye a mug of hot grog and a keg to sit on; stow yer cheers and open yer ears, fer Blackbead be wanting yer attention within. 'E's brought us some poems both feisty and wise, of Pirates be taking the plunder and prize, of leave taking and home coming, of angels and mermaids, and sirens besides, of hellions betrayed and mutineers flayed, of wannabe Pirates and landlubber friends — Hoist yer grog, Rummies, the voyage begins!"

With those words of introduction to this book of Pirate Poetry, Captain Robespierre, who came out of nowhere, disappeared once again, leaving me the task of telling you about Blackbead's work. Perhaps I should let the intrepid Blackbead, whose ship the Adventure out of sight of the land came bearing these ditties for reading or singing or shouting aloud, tell you in his own words how this journey began:

[facing page of Table of Contents] In the year 2008, a bold band of brave and hardy souls set sail on a journey born of hope and with the twin goals of glory and gold! These seafaring poets and artists, in honor of the spirit of the group, named their vessel the "Adventure" and set out to make their mark upon the pirate genre and do what they could to inspire their readers with tales full of the legends and lore of buccaneers, privateers, mermaids, sirens, and a life at sea. You are invited to sign articles and become a member of the crew! Enjoy these works and may they bring alive in your own visions of the swashbuckling world of the PIRATE!

About this time you'll be wanting to read a bit of this pirate lore in whimsical form, and you needn't worry about waiting too long. But lest you think this all too confused, there is something I must desperately do — give you some advice from Her Nibs, Rumba Rue, "Blessed are those who can laugh at themselves, for they shall never cease to be amused."

Take fer instance, "The Homecoming of Danny Fry" in which Fry bursts into a pub in the village of Tween and boasts these words penned by Stephen Sanders aka Blackbead:

Gradually the ale-filled pubsters began to recognize the salty pirate as one of their own, returned from the seas, Danny Fry. His effect on them was electric, galvanizing them with a sheen which will never leave them, no matter how mundane their daily lives may seem:

With laughter and smiles and friends arm in arm,
We all stumbled off into the morning light,
But none of us cared as we faced our red-eyed day:
Because of Danny, we'd all become pirates that night!

Perhaps ye might like to do the Morris dance with Flora along the Straits of Dover, who dances betimes with her Captain upon the other shore! Or sip a mug of Jasmine tea on the veranda at sunset in the red glow of the sinking Sun, knowing all things will pass and "only the sea will last." Or stand "the last watch", whispering goodbye to Kittye as she slips down to her "last salty kiss". Or look upon the ravishing Mermaid, who waits with salty tears for her Pirate's arms. Or the Siren who waits by moonlight and ocean wave for her own Pirate brave. Or "coiling a rope" and "trimming a sail to a perfect pitch" during the middle watch of blackest night with Stephen, "los momentos mas solitarios en la vida de un barco," Yanira Colon-Torres, tells us in Spanish, "the loneliest time in the life of the ship." Or swing wooden swords with the pirate's son in springs and neaps till his da' comes to take him aboard as a man, "to sail the rowdy ocean", to "see the sights there be to see", to "drink rum in foreign ports", together again.

Be Ye humming, "Tis a pirate's life for me" yet? Nay? Well, refill yer pipe and give me a light, we'll blow some smoke together. There's a Spanish galleon, a slaver, no doubt, with sickness on deck and below, and a chest of gold dust waiting for us. Grab Ye a line and we'll swing aboard, and take for me bos'n the Captain's green coat. Raise a toast of rum with me fer the loss of me mate Kilkallen who stole the heart of Desiree and never returned to the sea. "To never see the ocean, the glimmer of the sea? To never sail upon a ship, oh that couldna be me," Pamala wails in her bluesy soprano. "Nay! Tis the pirate's life for me!"

But there's a Bright light ahead, if "ye want to be a pirate, and sail the seven seas, taking ships with chests of gold and bringing admirals to their knees!" But things can dim over time, as J. L. Bright appends, "It's a sad life I've led, one I'd not do again, sailing under jolly rogers both black and red. I hope ye've listened and learned my hard lesson: If you have, ye'll stay home in yer bed."

Stay off the decks of the Sabre during the midnight watch, Stephen warns ye, for there's a Spanish senorita waiting to snatch you and whisk you away into the silvery moonlight over the sea. "She walks the deck at midnight, flaming hair and a gown of mist, her face a mask of fiery rage, her hand an icy fist."

Better to "slip away into the night to share a dance all alone with Rana" but tis Stephen's Rana and ye must find a Rana of yer own. Ye'll later "feel the warmth and the weight of her breast on yer chest," as ye recall that "moment of intimacy in a river of time." But ever — a pirate or a sailor, after they've rested, will soon be chanting, "Tis a sailor's life for me, ohhh off to the high ole sea!" with Kittye Williams or hoisting a toast to the high and mighty or the hoi polloi with the polished lyric by Melody Sanders, "Nobles and lords have a standard to keep, and must drink in their own company, but a pirate can drink with the high and the low: It's a pirate's life for me!"

For Gabrielle the belle of the Pirate Ball, for the good sailors below from Cardiff, Portsmouth, and Wicklow, for the galley cook stuck on a strand eating his weeviled stew, for the firebrand betrayed who sits by the fire remembering her days of "rollick and ire", for the old sea captain who visited one night to comfort his son and faded from sight, for the smell of the ocean, the pitch of the deck, we sign up aboard a slovenly wreck and don dead men's clothes and wear tattered rags, jest for the chance to be Raising Black Flags!

So, raise a mug to Blackbead and to his motley crew, homeward bound they may be, but drink ye their words inscribed on the page, and soon ye'll be feeling the deck and the pitch, cheering for booty and prize, hauling and heaving with sweat in yer eyes. Ye'll be scanning the horizon for the Spanish and French sitting dead in the water all begging for boarding, then drinking and wenching when you're back on the shore, and soon ye'll be yearning fer sailing once more. Avast me Hearties! Look down on the plowman, his zigs and his zags, Tis only this freedom can raise our black flags!

Feel ye the rocking o' the sea under yer feet as ye sip yer landlubber's grog?
Listen carefully — ye may be hearing Echoes from Other Worlds. 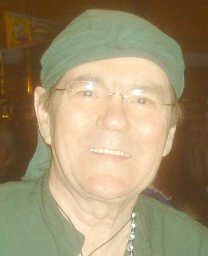