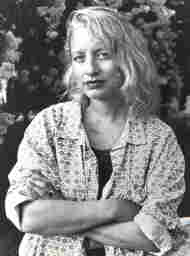 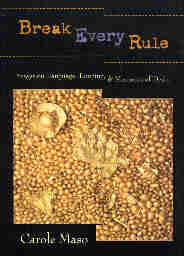 Break Every Rule
by
Carole Maso
Essays on Language, Longing & Moments of Desire
Published by Centerpoint/DC in 2002
A Book Review by Bobby Matherne ©2002

Here was a book I bought in order to read the essays on language, and I was satisfied with the way things started off in "The Shelter of the Alphabet." Alphabet speaks to me as meaning the "house of All" — the house or shelter (beth in Hebrew is house) of all the letters. In Greek, alpha and beta are the first two letters, as in A, B, . . . or all the letters. With the alphabet we can live in the shelter of all our words.

[page 16] I who live everywhere and nowhere have built a house of language.

Maybe alphabet means "house of the first thing" or our "first home" — it is the first completely abstract mental construct we build as a child, A BCD, EFG, HIJK, LMNOP . . . Can you say those letters without echoing the alphabet song of your childhood that you built back then? It provides a shelter for Maso.

[page 19] In the gloating, enormous strangeness and solitude of the real world, where I am so often inconsolable, marooned, utterly dizzied — all I need do is pick up a pen and begin to write — safe in the shelter of the alphabet.

She says of William Carlos Williams that he wrote to keep his sanity. Margaret Atwood said in her book, Negotiating with the Dead, that she wrote for various reasons such as, "To record the world as it is," to "To give back something of what has been given to me." She gave a whole litany of reasons, but never mentioned "keeping her sanity". Maso quotes Williams as saying, when he sent her on her strange path,

[page 3] "It's a strange courage you give me, ancient star."

Then she credits Allen Ginsberg, a native of her hometown, Paterson, New Jersey, for his inspiration:

[page 3] I adored his great heart and hunger, his music and outrage and audacity. His fallibility. How, as a teenager, I howled to his Howl.

As you can tell by now, Carole, whose name means "Sacred Song," writes poems in the middle of her prose at times. Here's another example.

[page 4]
Cadence was the block I lived on.
Language was my home.
Charmed one, I was born into a poem.

At Vassar she meets her beloved teacher, Miss Page, "who allowed me my first chance to write, to try, even though I had been rejected from the creative writing senior central course where one wrote a creative thesis." It is Miss Page, wonderful name for a writing teacher — don't you think? — who introduced her to Virginia Woolf.

[page 23] Virginia Woolf knew the illusion of fiction is gradual even if moments are heart-stopping, breathtaking. There is a pattern, which is only revealed as patterns are, through elongation and perspective, the ability to see a whole, a necklace of luminous moments strung together.

From the chapter "Notes of a Lyric Artist Working in Prose" another poetic interlude:

[page 24] Musings, ideas, dreams, segues, shifts in key, athletic feats of imagination, leaps and swirls. Or small, nearly imperceptible progresses. The unarticulated arc of our lives.
Many fiction writers do not, I believe, acknowledge reality's remoteness, its mysteriousness.

This resonated with me and leads me to propose a vow to be taken under solemn oath by anyone who wishes to become a novelist:

"Do you acknowledge reality's mysteriousness? Answer, 'I do.'"

[page 24] Together, many novelists, now commodity makers, have agreed on a recognizable reality, which they are all too happy to impart as if it were true. Filled with hackneyed ways of perceiving, clichéd, old sensibilities, they and the publishing houses create traditions which have gradually been locked into place.

Maso says that she loves "most what the novel might be, and not what it all too often is." "Reach," she exhorts the novelist. Reach. It is a complete thought, isn't it? Milan Kundera said that great novels are noted by the things they aim for, but never quite reach - the striving of a writer to discover something within in the process of writing the novel, that unique something that would distinguish the real writer's work from the hackneyed and stereotypical works he called kitsch. Years before I read Maso I had written my first novel, The Spizznet File, and I acknowledged in it the mysteriousness of reality, I reached for something within me in the process of writing it. When a writer does this, the experience become consensual with the reader. We know it. We can feel it. To combine the thoughts of Kundera and Maso, I might say that:

As I read Maso's Notes chapter, I felt as though we were "huddled around the fire of the alphabet" as she wrote on page 27. Then she quotes another favorite writer of hers and mine, Gertrude Stein — a writer who was the very epitome of anti-kitsch. She broke patterns that we didn't know were patterns until we read her work, How To Write. Here is an example of the chapter titled "Arthur A Grammar" that contains some rather challenging prose on grammar, comparing it to sawing up poplar trees:

Stein would have nothing to do with kitsch. She wrote herself constantly outside of the box, outside of the nine dots box of kitsch. Whereas others may write as if they had a party line, Stein wrote as she had a private line. She wrote directly out of her intuition, her private line to the spiritual world. My dad once asked me if writing was hard. I said, "Writing is easy; it's having something worth writing about that's hard." What's hard is getting at the essence of the idea that exists only within you once you mange to coax it inside you. Maso here quotes Gertrude Stein describing her writing process and goals:

[page 27, 28] "I have destroyed sentences and rhythms and literary overtones and all the rest of that nonsense, to get to the very core of this problem of communication of intuition. If the communication is perfect the words have life, and that is all there is to good writing, putting down on the paper words which dance and weep and make love and fight and kiss and perform miracles."

If we are fortunate as a writer, we might experience what Maso adds after the above passage, "Miracles might occur." But, she admits later, no miracle could produce the perfect novel. A perfect poem might be possible she admits, but a perfect novel, never. It's all a matter of reach — perfection is attainment, it is not reaching. She writes on page 33 about writing novels, "That's what I love most about the form."

"Notes" continues on in snippets of sentences and words, Gertrudesque to the end. This next one on page 48 caught my ear and eye: Each word a boat. I began to envision a word as a boat. A boat, a carrier of meaning floating above an ocean of chaos. We as the reader pull the oars move our boat from word to word and leave books in our wake. Then she added this snippet on page 40, "As we form our first words after making love." I got it — after making love, we must climb from the ocean of chaos once more into the boat that we call "word" and re-familiarize ourselves with that boat in order to be able to speak.

Row your small boat. A word a rowboat. A battlegroup a sentence. A flotilla a chapter. An armada a book. Whatever floats your boat is an intuition. You can either write it or ignore it because there is no canned form, no kitschup bottle to dispense it with. Either your words stay moored in the marina or they dance on the waters. Mooring or dancing. Kitsch or Reach.

In the chapter, "A Novel of Thank You," Maso writes:

[page 101] I find you young writers worrying about losing your integrity and it is well you should, but a man who really loses his integrity does not know that it is gone, and nobody can wrest it from you if you really have it.

These notes from Carole Maso were the best of a good book on writing. Miss Page would be proud of her writing student. Gertrude Stein would approve of her attempts to copy and yet be different from Gertrude Stein. And Allen Ginsberg would have certainly loved someone from his hometown who could write, "How, as a teenager, I howled his Howl."