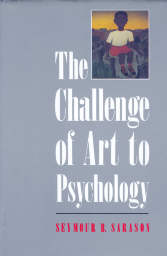 The Challenge of Art to Psychology
by
Seymour B. Sarason

The author suggests in his Preface that the best title of this book would be:


How Our Society Ignores, Blunts, Extinguishes, and Devalues a Universal Feature of Human Capability, with Untoward Effects for People and Society

A little unwieldy, he admits, but in his The Argument in Summary chapter, he quotes the American poet, John Ciardi, as he was addressing a group of powerful businessmen:


[page 7] 'An ulcer, gentlemen, is an unkissed imagination taking its revenge for having been jilted. It is an unwritten poem, an undanced dance, an unpainted watercolor. It is a declaration from the mankind of the man that a clear spring of joy has not been tapped and that it must break through muddily, on its own.'

No better description of the difference between art and science can be found than what William James said in his Talks to Teachers on Psychology:


[page 65] I say that you make a great, a very great mistake, if you think that psychology, being the science of the mind's laws, as something from which you can deduce definite programs and schemes and methods of instruction for immediate schoolroom use. Psychology is a science, and teaching an art, and sciences never generate arts directly out of themselves. An intermediary inventive mind must make the application, by using its originality.

Later the author asks a very interesting question when he tells us what he found in classrooms:


[page 71] What happens to the rate of question asking when a child begins school? I have spent countless hours in classrooms. None of my observations stemmed from an interest in question asking. It took me a while to become aware of the obvious: the classroom was not a place where children asked questions. They answered, they did not ask questions.

In the study by Edwin Susskind in 1969, one of the few ever done on question asking, he found that, in a typical 45 minute class period, the teacher asked from 40 to 150 questions while the children asked only two. What happens to our children in school when the education system focuses on teachers asking all the questions?


One can easily imagine the demotivating and demoralizing effect it has on students for the teacher, who knows all the answers, to be doing all the asking of questions. As Sarason points out, "It's as if the questions of children are either nonexistent or interfering or a distraction to be ignored." Asking questions draws answers from those children who already know the answer and is best saved for testing time. When a child asks a question, they open the possibility within for learning to take place, both in the questioner and in the remainder of the classroom.


John Dewey's lectures at Harvard (1932) in Art as Experience next comes under Sarason's viewing glass. "Dewey was a destroyer of traditional dichotomies," he says by way of introducing the importance of Dewey to our understanding of art and its place in our lives. To see Dewey as a destroyer of the fixed two-part labels of art and non-art, of artist and non-artist, places Dewey in the category of artist according to my definition of "art is the process of destruction of sameness." Notice how Dewey distinguishes fine art from the varieties of human experiences by discussing a continuum like that which distinguishes a mountain from the surrounding terrain:


[page 84] Mountain peaks do not float unsupported; they do not even just rest upon the earth. They are the earth in one of its manifest operations.

He explains the origins of art in common everyday experiences that everyone can relate to:


[page 85] The sources of art in human experience will be learned by him who sees how the tense grace of the ball-player infects the onlooking crowd; who notes the delight of the housewife in tending her plants, and the intent interest of her goodman in tending the patch of green in front of the house; the zest of the spectator in poking the wood burning on the hearth and in watching the darting flames and crumbling coals.

These experiences are examples of what Dewey calls the life factor that allows us to destroy the expectations of sameness in process of creating original art. All art must be original - or else it is merely the production of epigones, those born-after, second-hand imitators, those purveyors of kitsch, which is the typical output of craft classes and weekend artists that lines the display stands of shopping mall exhibits. Sarason notes the clarity of the phrase life factor thus:


[page 92] In other contexts and by other writers, the phrase "the life factor" may strike one as vague, mushy, and up-in-the-clouds. But Dewey is extraordinarily clear that the life factor is the normal human attribute that allows us to depart from a previous given order and to forge a new one. It is the attribute that, despite the process of socialization and its goal to maximize continuity of and conformity to the established order, ensures individuality.

Thus put, art, as the breaking of the established order, is synonymous with the process of freedom or spiritual activity as described so well by Rudolf Steiner in his Philosophy of Freedom, a book that he preferred the title, Philosophy of Spiritual Activity, for his American readers' ears. The life factor is an excellent synonym for spiritual activity as it is used by Steiner. One of the challenges that art gives to psychology is that the universal laws so cherished by psychology are broken with regularity by the artist, since law-breaking is an inevitable concomitant of a free activity. The greatest artists of this century were those that broke the laws governing what was an appropriate mode of painting, as Picasso did with his cubism paintings.


It would seem that children with their limited knowledge of the rules about writing would be natural poets, and so Kenneth Koch, a poet and professor of creative writing, decided to teach poetry at P. S. 61 in New York City, and wrote of his experiences in Wishes, Lies, and Dreams in 1970. But he discovered instead that, "Some children's poetry was marvelous but most seemed uncomfortably imitative of adult poetry or else childishly cute." He got amazing results from one fourth-grade class with his "I wish" exercise. He told the teacher to ask her students to begin every line with "I wish, not to use rhyme, and to make the wishes real or crazy."


Sarason, as a clinical psychologist, writes of encountering a new complaint in his clients, a feeling of lowered expectations and a bleak future. He says about them:


[page 180] That was not what they complained about when they began psychotherapy, but that is precisely what emerged over time. The sense that they could no longer expect much from life, that they were impotent to change their situation, let alone change a complicated, vast, uncomprehending, incomprehensible, overpowering world. . . . We are enmeshed in a world system that has discernibly decreased our freedom of action.

Rightly seen, the embedding of the individual in a culture of mechanized kitsch, mass-produced sameness, and vacuous self-expression has resulted in a loss of vital meaning, as though the life factor of our lives depends on embedding ourselves in the process of art-producing activities as much as art depends on the life factor for its existence.