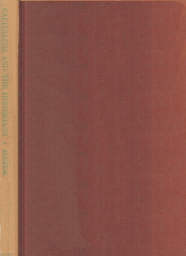 Capitalism and the Historians
by
F. A. Hayek
Essays by T. S. Ashton, L. M. Hacker, W. H. Hutt, and B. de Jouvenel
Published by the University of Chicago Press in 1954
A Book Review by Bobby Matherne ©1999

Everyone knows that what everyone knows is usually wrong. Here's one example: everyone knows that unfettered capitalism is evil. In the movies, the power-mad industrialist puts up satellites to blow up the world if his demands for world domination are not met. Pick any Hollywood movie of the past 30 years, and if there's a large capitalist enterprise involved in the plot, chances are that its head will be the bad guy, the evil villain of the plot.

This book describes how this originally got started. F. A. Hayek and other writers knowledgeable of the period explain how the lies told about capitalism in England and America in the 1800's made capitalism sound like the villain it never was. Instead, capitalism was actually a good member of the village — a good villain — one that provided better jobs and food to poor folk that otherwise would have died, as many did in fact die of starvation before capitalism showed up. But since some problems continued in England simultaneously with capitalism, albeit in different locales from where capitalism existed, nevertheless capitalism got the blame from the historians. These were respected historians, but ones who had a socialist axe to grind, and who hoped, not without justification, that the majority of folks reading their fictional drivel wouldn't bother to check out the facts of the matter. This book checks out the facts of the matter and sets the facts straight for those who would prefer living in a rational society in freedom rather than living in an irrational one in indentured servitude to coercive bureaucrats.

These same skewed historians want us to think that this bad rap got started due to the evils of capitalism in 19th Century England when rapid industrialization pushed wages down, lowered the standard of living for families, produced dark windowless housing units in ramshackle apartment buildings, and pressed children into servitude working long hours in factories for pennies. The images of collapsing jerry-built (from jury-built) housing units, deformed children slaving in hot factories, streets over-flowing with raw sewerage, and overcrowded factory towns are brought up to us as part of their indictment of capitalism. And all this is carefully documented by these historians. Carefully, but not accurately, because the evil villain is unmasked by an unbiased analysis to be the coercive state practices, not capitalism.

In these essays concerning the treatment of capitalism by historians, the authors of these papers analyze the history of the 19th Century in England and America to uncover some salient facts:

One suspects that these capitalist-slamming historians were not writing about objective facts, but were merely re-hashing the interpretations of the biased social commentators of the time. These historians merely wrote what gentlemen of London society were saying at the time, "that the people, from starvation, oppression, and over-work, had almost lost the form of humanity." A gentleman made this remark to a Mrs. Cooke Taylor who had just returned from actually inspecting the conditions in Lancashire that the gentleman had referred to. She asked where he had seen such misery, and he replied that he had never seen it, but had been told that it existed. Mrs. Cooke Taylor's personal comments about the conditions in Lancashire were:

[page 21] "Now that I have seen the factory people at their work, in their cottages and in their schools, I am totally at a loss to account for the outcry that has been made against them. They are better clothed, better fed, and better conducted than many other classes of working people."

The Marxist writer, Engels, wrote that the clothing of working people was in very bad condition, that cotton had replaced wool as the primary material. What he left unstated was that the woolen industry had labored under the strictures of the Statute of Labours since Elizabethan times. (Page 71) The cotton industry, sans such coercive restrictions, grew rapidly and came to be the material of choice for new garments. In a similar fashion, the American South, sans coercion, was a flourishing economy in the period 1830 to 1860 due to free trade, cheap navigation, easy monetary policies (none), and low taxation. With the South seceded from the Union, the Congress proceeded in the period of 1861 to 1865 to pass all the restrictive laws that the South had earlier fought as a member of the Union. Similar to what happened in England, apologists for the state and historians blamed capitalism for creating slavery and masked its intent to promulgate state coercion to replace the so-called horrors of capitalist coercion.

L. M. Hacker, writing an essay about America, points out that Josephson's The Robber Barons was based on "anecdotes, half-true tales, and uncritically handled court records". On such a tenuous basis the following three attitudes became part of "what everyone knows". It doesn't take much imagination to see that these attitudes are projections onto capitalism of the state's own coercive folly, which continues to the present day, up until now.

[page 80]
(1) that great fortunes in America were built up by fraud;

(2) that the country's natural resources were looted in the process; and

(3) that the social consequences of private ownership and wealth were unhappy — in creating classes, in subordinating agriculture, in building slums, etc.

Hacker on page 81 pinpoints the existence of the first "Freedom Spectrum" [See ARJ: Sic Itur Ad Astra], albeit in an inverted form of the spectrum of the percentage of state intervention, from all to none. Hamilton weighed in on the all side ( 0%Freedom) and Jefferson on the none side (100% Freedom). The history of America has since been a move from Jefferson's 100% end of the Freedom Spectrum to Hamilton's 0% end, up until now. And at every step of the way to 0% Freedom, the path has been strewn with half-true tales and fraud.

One example is the reports of the exorbitant profits that mega-industrialists like Andrew Carnegie were supposed to have made. Historians love to cite those profits as examples of the evils of capitalism, those obscene profits, they like to call them. They do so only by ignoring the gross overcapitalization of Carnegie Steel, which Andrew Carnegie only adjusted immediately before he retired to fifteen times the arbitrary book value that had previously been set. Yet historians base their claim of obscene profits on this same abysmally low book value.

Bertrand de Jouvenel makes the point that coercion has the opposite of the intended effect when applied to unwanted human behavior. When one knows the worthlessness of what they desire, their behavior tends to damp away, but when coercive laws are passed, the outlawed behavior begins to grow, as the behavior seems more desirable. The first method creates societal stability, the second, societal instability. One look at our experience with Prohibition is enough to convince anyone of the wisdom of Jouvenel's statements.

[page 95] These phenomena warn us that a result contrary to the intention may be obtained when social devices [i.e., coercion] are used to raise the moral level of human behavior. It is, moreover, well known that any attempt to change man's actions by means other than a change in his spirit is usually futile and anyhow not a moral improvement.

Jouvenel on page 100 makes a cogent point that the vast improvement of worker's conditions that is widely attributed to union pressure and "good" laws would have likely occurred anyway. He says that all the political action has "merely shaken from the tree the fruit it had borne." Unions, in other words, do not produce fruit and laws do not produce fruit, the entire tree produces fruit, from the ends of the roots to the tips of the branches, but to listen to "what everyone knows," one could be led "to the belief that fruit is produced by shaking the tree."

The closing paragraph of the book by W. H. Hutt provides an apt summary of the contents of the essays of this fine book that should be on every capitalist and freedom-lover's bookshelf:

[page 183 to 184] The two main conclusions suggested by this discussion are, first, that there has been a general tendency to exaggerate the "evils" which characterized the factory system before the abandonment of laissez faire and, second, that factory legislation was not essential to the ultimate disappearance of those "evils." Conditions which modern standards would condemn were then common to the community as a whole, and legislation not only brought with it other disadvantages, not readily apparent in the complex changes of the time, but also served to obscure and hamper more natural and desirable remedies.