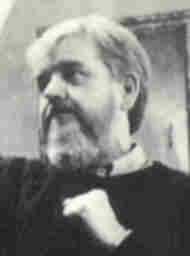 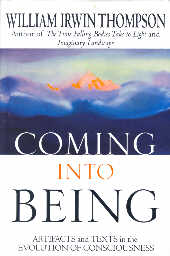 A READER'S JOURNAL
Coming Into Being
by
William Irwin Thompson
Published by St. Martin's Press in 1996
A Book Review ©1997 by Bobby Matherne

The subtitle of Thompson's latest book is Artifacts and Texts in the Evolution of Consciousness. It might easily have been subtitled, Conjuring with Ancient Texts to Imagine a Metaindustrial Horizon for our Future — which words he used to describe his Lindesfarne lectures in St. John the Divine Church in New York where he first spoke about many of the issues in this book. Like Wynton Marsalis playing his rendition of Pennies from Heaven, the text and score are only the launching pad for the virtuoso improvisation that follows.

In Thompson's sweeping vision of our polyadjectival future he portrays technology as an essential ingredient, but somehow he wants to exclude television, as most technosnobs do: "We can sense television does not embody the truth, that it is a consensual delusion, a droning Muzak inside an electropop mediocracy." In saying this he seems to be mistaking the medium, television, for the message received by the 27-year-old MTV mentality of the average viewer of the medium. Twenty-seven years old, Rudolf Steiner pinpoints as the age that one's intellect in this epoch ceases to mature unless extraordinary personal efforts are expended. Thompson quotes Steiner in several places, but one gets the impression that his reading of Steiner was spotty, and that his understanding of Steiner is deeply superficial.

In truth Thompson is a deep thinker and his improvisations on the themes of the Rig Veda, Upanishads, Bhagavad Gita, Gilgamish, Oresteia, and many even-more-obscure mythological texts are awe-inspiring and at times confounding. Were you to attempt to read all the books Thompson refers to before reading the book, you would likely forget why you were reading them before you finished them. Thus unprepared one must ride the whirlwind with Thompson, holding on for dear life as he escorts us back and forth over ten millennia, integrating the warp and woof of myths into the tapestry of our flying-carpet time-machine as we go.

One of his recurrent themes is "evil is the annunciation of the next level of organization." (page 152) Instead of "evil" I suggest that we look at the panoply of ways we deal with the "next level of organization." Jean Auel showed in her book, The Clan of the Cave Bear that an advanced Cro Magnon human, Ayla, among Neanderthals would be treated as a defective rather than an advanced member of the human race. The clan's response to Ayla's gifts was to throw her out of the clan. To the men of the clan Ayla's superior arm throwing skills were an evil: evil was the label ascribed by the tribal males to a person threatening the mores of their society. One can see that today in the persistent "war on drugs" by the masculine-minded coercive forces of the bureaucracy of the USA. The drug forces are demonized as "evil" so that massive police forces may be marshaled to run roughshod over the liberties of the people.

So I would prefer a generic statement of the principle Thompson alludes to: "Rejection by society is the first response to an evolution of the human species." Thompson shows this trait himself in his slamdunk rejection of television as a "droning Muzak."

None of these shortcomings get in the way of enjoying the broad panorama of human evolution presented in this book. We learn to spot the sacralyzing of old technology from Marshall McLuhan's phrase, "the sloughed-off environment becomes a work of art in the new and invisible environment." (Old Cadillacs buried halfway in the ground as a work of art.) We come to understand the butter churn as a symbol for sexual intercourse: a phallic projection is moved in and out of the feminine receptacle until butter (semen) appears. We learn from Marx that, "the first time is tragedy, the second time is farce." (The sexual peccadillos of presidents Kennedy and Clinton.) And then there is Thompson's simple definition of the ego, "You are hunting for that." To the extent that you are hunting and searching for something in your life, you are evoking and stoking your ego, you are under control of your masculine part, the most masculine part there is, your ego. Note how different from the ego the following simple Zen verse is:

In the ebb and flow of masculine ego and feminine receptivity, as we view them over eons of time in the sacred scripts and storied myths, we perceive a pattern of repetition, of peridos, a circling, but with each circle we reach a higher level. This is a process we can only call the "evolution of consciousness."