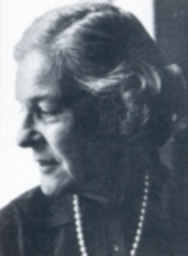 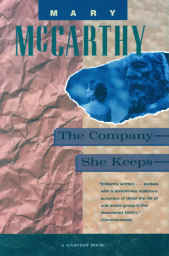 The Company She Keeps

Published by Harcourt Brace/NY in 1970

A Book Review by Bobby Matherne ©2004

Ah, the company that Margaret Sargent keeps, or, rather kept, in those halcyon days of Al Smith, Norman Thomas, and Franklin Roosevelt. The last male company we learn about is the psychoanalyst who has her thinking and talking about the first male company she kept, her father. In this passage from the Chapter, "Ghostly Father, I Confess", she confesses to being an atheist, saved from salvation in the Catholic Church in the nick of time by Communists, Socialists, and Philosophers. Who would want to read this book after reading this synopsis? Ah, there's the rub.

[page 274, 275] (Don't look now but isn't she the girl who stirred up all that trouble a few years ago? Treated her husband so badly he drove his car off that cliff. Of course, he was drunk and luckily he wasn't hurt, but still . . . And then that other guy -- what was his name -- she worked on him till he left his wife and then wouldn't have anything to do with him. And there was another story. . . he was sick and she didn't go to see him . . . The time she made poor so-and-so quit his job on that foundation because it wasn't radical enough to suit her . . . Got them to introduce her to some publishers and then dropped them like a hot-cake . . . Her best friend . . . Now she's married to that architect, you know the one, that does those houses with ramps . . . I guess she's got what she wants, but they fight like cats and dogs. . .)

The company she kept is introduced in the following chapters Cruel and Barbarous Treatment, Rogue's Gallery, The Man in the Brooks Brothers Shirt, The Genial Host, Portrait of the Intellectual as a Yale Man, and, finally, Ghostly Father, I Confess. In the first chapter we learn that she is the perpetrator of the cruel and barbarous treatment, when she has an affair with The Young Man, who didn't deserve a complete Chapter in the book, much less in her life. The Rogue's Gallery was a gallery of one rogue, Mr. Sheer, whose name is a suitable metaphor for the goods he sold in his antique gallery -- they were like slides projected from the back of a sheer curtain which appeared at his behest whenever a potential sale presented itself. He would sell an antique he was holding for someone in his shop, and then when the owner showed up and noticed his piece was gone, he'd make up a story about where it was, until he could sell a larger piece he didn't own to pay off the first owner. This continued much longer than one might imagine due to the ingenious explanations he would fabricate on the spot as to the disposition of an inquired about piece. Margaret, as his assistant, had to field the questions from owners, attorneys, and detectives attempting to discern the truth, which, with this rogue, was a moving target.

[page 76] As time passed, it became increasingly difficult for Mr. Sheer to regard his life as an imposture. He still believed that he could "be himself" with me, but actually our conversations were more and more taken up with politics, the weather, the women's dresses, the state of business, till the outlaw Mr. Sheer I dined with was practically indistinguishable from the Mr. Sheer one met at the.ga1lery or at a hunt breakfast somewhere in New Jersey. It was plain, at last, that Mr. Sheer had not imposed on the business world and used it for his own delight, but that the business world had used Mr. Sheer, rejecting the useless or outmoded parts of him. He had not, as he first thought, outwitted anybody, but he had somehow, imperceptibly, been outwitted himself.

The Genial Host is a wonderful satire on a man who gauged his life in the things he acquired that his guests admired. He obviously intended to acquire Margaret for his collection, but she was too conscious of the ploy to be taken in as part of his permanent collection. She did, spend some time in his display case, however. Every party at his place became a scavenger hunt of the premises. Here was how you would be greeted by Mr. Pflaumen, the Genial Host.

[page 146] Indeed, Pflaumen, opening the door of his apartment, often wore that look of owlish mystery that says, "What's new about me?" and the guests, being warned by it, examined the premises sharply till they found the single ornament that was responsible for the host's elation. This acquisitiveness of Pflaumen's was, you thought, just another way of making it easy for his friends to appear to like him. He was giving them something they could honestly admire, and if the objects could be viewed as extensions of Pflaumen's personality, why, then, it followed that his friends admired Pflaumen. It was on such questionable but never questioned syllogisms that his social life was built.

Jim, her Intellectual from Yale, might drop a comment to Al about the Communists to let him know what he is up against. To understand the jocular nature of the author’s phrase “dissemination of ideas”, one needs to understand that “durable consumers’ goods” are high value items that last three or more years such as refrigerators, washing machines, and automobiles. One wonders if the “dissemination of ideas” has improved much in recent years.

[page 168, 169] Later that evening Al might remark to his wife that maybe it would be a good idea (didn't she think?) To lay in a stock of durable consumers' goods -- in case, oh, in case of inflation, or revolution, or anything like that. His wife would interpret this in terms of cans and leave a big order for Heinz's baked beans Campbell's tomato soup, and somebody else's chicken à la king with the grocer the next day. This was the phenomenon known as the dissemination of ideas.

He was the one she got to resign from the liberal magazine and write a definitive book to extol his beliefs. Unfortunately it was more of a ding-a-ling than a tolling that he achieved.

[page 239] . . . it did not sound ( as he hoped it would) like a major work. It was solemn enough but it was not momentous. What was missing was the thing Jim had found in Marx and Verblen and Adam Smith and Darwin, the dignified sound of a great calm bell tolling the morning of a new age.

Apparently Jim's book achieved more a mourning of a new age which never came about -- the only tolling was the death knell of some imagined new age.

The other company Margaret kept was Frederick, her husband, who never treated her as an equal and utilized her track record with other men and her current sessions with the psychoanalyst to keep her under his thumb. This next passage takes places in her mind as her analyst is ranting on about the castration complex.

[page 280, 281] He was always talking about what he called her "bad record," a divorce, three broken engagements, a whole series of love affairs abandoned in medias res. Perhaps what counted for him more than any what love was all about?), more than a stable household with a pretty wife across the dinner table, was that this should not happen to him, that no one should be able to say, "Well, she's done it again." Furthermore, the fact of her illness as a weapon in their disputes. He was always in a position to say to her, "You are excited, you don't know what you are saying," "You are not a fit judge of this because you are neurotic," "We won't discuss this further, you are not sane on the subject," and "I don't want you to see your old friends because they play into your morbid tendencies." And under the pressure of this, her own sense of truth was weakening. This and her wonderful scruples were all she had in the world, and both were slipping away from her. Overcome by the pathos of her situation, she began to cry.
Dr. James, who was still talking about castration, stopped in the middle of a sentence.
"What is it?" he said. "What upset you?" He had his notebook ready.
"I wasn't listening," she said, knowing that this was not quite accurate. She had heard him, but the mind's time is quicker than the tongue's. Through the interstices of one of his measured paragraphs her whole life could flood in .

I read this book because of its setting in the 1930s, in that era before being a Communist was anathema. It was a different world then in so many ways. One can espy evidence of our evolution of consciousness in those 70 years since the time of this book in this next passage. We just do not speak anymore like she does in the last between-phrase below:

[page 290] How schematically it had been lived out, the war between the flesh and the spirit, between women and men, between the verminous proletariat and the disinfected bourgeoisie.

When a woman today is told by her husband, "This isn't like you, Meg" as Margaret's husband told her, she doesn't collapse in his arms sobbing any more, but is more apt to say, "Who are you to say what is like me? This is exactly like me!" Once in a row is enough. Women have endured the slings and arrows tossed at them by berating husbands long enough, and we can re-experience one of their perilous passages to freedom between the covers of this book.

Other Books by Mary McCarthy: