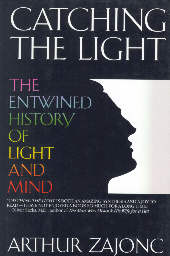 Light, like a book, is invisible in flight; it is only when we catch either a light beam or a book that it has an impact on us. Thus reading Catching the Light is like catching the light from the sun — when the light enters our eyes, the information it imparts to us informs us of a whole world of light existing outside of us.

Zajonc takes us on a guided tour of that whole world of light in a way no one has done before — he allows us to see through the eyes of all the major explorers of the world of light. We see light as Homer, as Zoroaster, as Mani, as John of the gospel, as Brunelleschi, as Isaac Newton, as Thomas Young, as Goethe, as Faraday, as Maxwell, as Rudolf Steiner, as Einstein, as Feynman, as David Bohm, and as John Wheeler.

Which of these views of light is true? I ask you. Zajonc points out that it would be better to ask what is the significance of each view, and proceeds to answer that question time and again. He asks on page 184:

What lived within the soul of Egyptian or Greek that was content with the eye of Horus and swift-winged Iris? As John Stuart Mill wrote, paraphrasing Coleridge, "The long duration of a belief is at least proof of an adaption in it to some portion or other of the human mind; and if, on digging down to the root, we do not find, as is generally the case, some truth, we shall find some natural want or requirement of human nature which the doctrine in question is fitted to satisfy."

One of the more radical views of light is Goethe's treatment of light in his Towards a Theory of Color as he places the mischievous behavior of light in the forefront of his theory. As Zajonc puts it: "Indeed, for him there is no such thing as an optical illusion: 'Optical illusion is optical truth!'"

In fact, in Goethe's view, it was the intense contemplation of the sun that created the very organs of sight, our eyes. In Goethe's own words: "Every object, well-contemplated, creates an organ of perception in us." And: "From among the ancillary organs of the animals, light has called forth one organ to become its like, and thus the eye is formed by the light and for the light so that the inner light may emerge to meet the outer light."

Zajonc's book teems with marvelous insights and his own sparkling prose fills each page. Here are some examples:

Goethe's is a participatory science in which the sight of an idea, the epiphanous moment, is supreme. How can one come to see an idea within the phenomena, to see through color, the character of light? Only by building up the organs needed. The chemist laboring over her laboratory bench, the mathematician working at the blackboard, are working as much on themselves, educating capacities for insight, as they are on the chemicals in the flask or the equations on the board. Our every engagement and action is pedagogic, educating new organs for discovery, artistic or scientific. (page 206)

Knowledge is not an object to be traded like chattel, but an epiphanous moment to be cherished. Too often we bypass epiphanies for a currency more ready at hand, for an abstract notion, an old insight in new dress, an equation whose characters could reveal, but which, in fact, we allow to go unread. These are the stones of knowing instead of the bread. (page 342)

Seeing light is a metaphor for seeing the invisible in the visible, for detecting the fragile imaginal garment that holds our planet and all existence together. Once we have learned to see light, surely everything else will follow. (page 343)

After we accept the history of its changing character, where does mind now tend, what are the possibilities for its conscious cultivation, and what will be the new fruits of tomorrow's awakenings to light? (page 329)

This is a book to be read and re-read, a compendium of the views of light, quantum physics, and the history of human thought all in one small volume. Like a crystal on a string catches the light rays from the window and casts beautiful rainbows that swirl about the room, this book catches the history of light and fills our minds with rainbows of insight. Catch the light of Catching the Light — coming soon to a book near you.

To Obtain your own Copy of this Reviewed Book, Click on SteinerBooks Logo below.
This ISBN Link will work for older books.