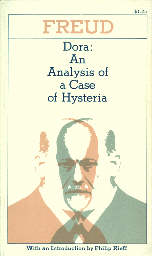 This was an early and incomplete case (only three months long) of hysteria that Freud treated. It began with a long introduction in which he apologizes in advance for the frankness of his discussion of the delicacies of sex, but insists boldly that he will always "call a cat a cat." The exact phrase he uses is in french, "J'appelle un chat un chat." In french "chat" is the equivalent of the American word "pussy" which jocularly refers to a woman's "vagina." Can this be the primeval Freudian slip?

The case history involves a complicated set of liaisons of Dora, her father, her mother, Mr. K., Mrs. K., and the governess. Of course, at the point of therapy it includes Dr. F. also. Dora's father is humping Mrs. K. and Mr. K. is trying to hump Dora, who, after a childhood of trying to replace her mother in her father's affections, is now in a position to replace Mrs. K. (Dora's father's new love) in Mr. K's affections. To this basic plot, add a man-hating governess, a large helping of bed-wetting and masturbation, a couple of dreams, and a walk around the lake, and you have the entire book.

Here is an interesting quote from the book:

It is true that the symptoms do not disappear while the work is proceeding; but they disappear a little while later, when the relations between the patient and physician have dissolved.

This helps explain why Milton Erickson kept his clients writing to him for years after the therapy sessions had ended — he knew that the final work would get done after his clients had considered the therapy over.

It also indicates the importance of the selection of an end-of-therapy test — if the therapist selects complete removal of symptoms as the test to signal the end of therapy, in psychoanalysis, there would be no ending — which, come to think of it, there is none. The client leaves by making a decision to take over the completion — sans therapist.