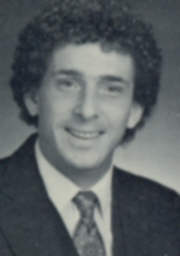 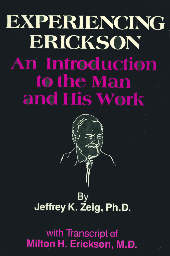 
You've heard of Milton Erickson, the great hypnotherapist? No, well, this is a good book for your introduction to his work. If you go to a great chef and ask how he bakes a cake, very likely he'll answer you by baking a cake in your presence. If you go to Erickson to ask any question, he bakes you. In this book, you can read how he bakes Jeffrey Zeig.

Ralph Waldo Emerson said in his essay on Self-Reliance that "Shakespeare will never be made by the study of Shakespeare." Given the spate of books about the study of Milton Erickson's life and work in the past thirty years, one wonders about the results of these efforts. A woman once told Isaac Stern, "Mr. Stern, I would give my life to be able to play the violin the way you do!" Stern looked at her and said, "My dear lady, I did!" And so did Erickson give his life to become the person and therapist that he was.

Battling back from polio several times, he spent the time others might have spent bemoaning their fate in careful observation of ordinary details of life that others take for granted. He would make predictions, write his predictions down, and check them later to see if they were accurate. Sometimes his predictions that a woman was pregnant preceded the woman's knowledge of the fact. He could tell if a driver was going to turn right or left at the next corner, or if a person were hungry as they walked near a bakery.

He used this knowledge of everyday life to determine therapeutic courses of action in his clients, often without their conscious knowledge of what he was giving them and sometimes without his own conscious planning ahead of time. Erickson trusted his unconscious consciously. Once a widely disliked doctor had a problem that was published in the newspapers. At a public meeting when someone asked Erickson what he thought about the infamous doctor, he said, "I only know what I read in the newspapers."

Erickson was the master of commonsense and no-nonsense. When Zeig asked how he would treat a man who scratched himself constantly while sleeping, Erickson recommended he tell the man wrap to his fingers with tape, one-by-one every night before going to sleep. Zeig told him that "It's a long-standing problem." Erickson replied, "Tell him to use a lot of tape." (Page 74) When he told a woman to "skate or get off the ice," she said, "My therapist told me that 50 times." So Erickson said, "All right, I'll put it to you another way. Either shit or get off the pot. I'm saying that once." (Page 133) Erickson used to keep a stunt rock made of styrofoam at hand and several occasions he is known to have thrown it at a client with the words, "Don't take anything for granite."

He also could defuse problems before they arose, in completely unexpected ways. Here's an excerpt in which a well-prepared lawyer was trying to undermine Erickson's testimony as an expert witness. When she asked Erickson, "Who is your authority?" Erickson said, "I am my own authority." Then the following exchange ensued (Erickson is telling it to Zeig as a teaching metaphor to ease his discomfort when appearing as an expert witness in court):

[page 72] The lawyer then asked, "Dr. Erickson, you say that you an expert in psychiatry. What is psychiatry?" Erickson said that he provided the following response: "I can give you this example. Anyone who is an expert on American history would know something about Simon Girty, also called 'Dirty Girty.' Anyone who is not an expert on American history would not know about Simon Girty, also called 'Dirty Girty.' Any expert on American history should know about 'Simon Girty,' also called 'Dirty Girty.' "
Erickson explained (to Zeig) that when he looked up at the judge, he was sitting with his head buried in his hands. The clerk of the court was underneath the table trying to find his pencil. The (other) lawyer was trying to suppress an uncontrollable laugh.
After Erickson gave that (seemingly irrelevant) example, the lawyer put aside her paper and said, "No further questions, Dr. Erickson."
Then Erickson looked at me and said, "And the lawyer's name . . . was Gertie."

Zeig remarked at the end of this story that he was unable to go into court without thinking of 'Dirty Girty" thereafter. Zeig said on page 14, "Traditionally, hypnosis and humor are considered immiscible," but, in the presence of Milton Erickson's personality, even the hardest heart would dissolve, and the lucky ones would even laugh aloud.