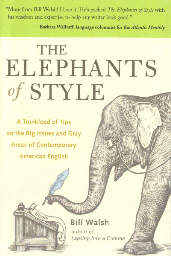 The Elephants of Style

Almost lapsed into a coma reading this book, I did, which ironically is almost the title of Walsh's previous book, Lapsing into a Comma. Walsh has taken his Strunk & White's Elements of Style and washed it down with a trunkful of river water to come up with his droll title. Perhaps I was expecting a Mad Magazine satirical treatment of the classic style book, but instead I found only rules for various usages and conventions for writing, including differences between rules for newspapers, magazines, and other writing media, most of which I could care less about writing for, and thus my ennui by the time I finished the book. Usually the only question I ask about style is, "What's my style for . . .?" But if you spend time writing for others, the question becomes, "What's our style for . . .?" and the need to ask that question reminds me of a lugubrious time long ago when I used to write for others instead of myself. Coming up to date, letÆs see, what's my style for quoting from an Introduction to a book?

[page xi, Introduction] ōWhatÆs our style for . . .?ö Spend time in a newsroom, a magazine office or anywhere else that publishing takes place and you'll hear that question. Strictly speaking, style refers to a choice of one correct alternative over another for the sake of consistency (canceled over cancelled, nine over 9, OK over O.K. or okay) and an appropriate level of formality (what gets abbreviated, what gets capitalized and which typographical niceties are used). Often, however the word style is used loosely to refer to correctness in spelling, grammar, syntax, usage or even matters of fact.

I must admit that I like Walsh's pugilistic approach to writing about style Ś he even admits to "misappropriating" the title from his Strunk & White, perhaps inspired by the name Strunk. Who died and put Walsh in charge of the English language? Cute, right, but fun if it's the author himself who wrote the question about himself on page xiii. And if he or I were in charge Ś and I am in charge when I write Ś "I would dispense with this he or she, him or her, his or her nonsense and bless they, them, their, theirs as acceptable singular pronouns." (Pages xiii, xiv) Yet I differ with Walsh by not allowing my dashes to abut the words they separate Ś as you can see Ś because so often in my reading, I encounter two words which seem to be hyphenated, but which are meant to be separated by an em-dash Ś like these Ś but the combination of using en-dashes (which resemble hyphens) to separate both words and phrases can be dreadfully confusing. Why place an unnecessary speed bump into one's writing? Eschewing the use of tight dashes avoids this problem Ś thus my usage.

Walsh and I disagree a bit on style, but we seem to agree that this quotation from the UPI Stylebook is definitely funny.

[page 11] A burro is an ass. A burrow is a hole in the ground. As a journalist you are expected to know the difference.

His short chapter on Titles vs. Job Descriptions could be summarized like this: I thought I saw the President go by, but Walsh told me that it was just the president Ś President Kennedy.

Recently I received an EditPros News issue from Jeff March about "Empty boxcar words" which "needlessly prolong and bog down sentences." I often recall that time in my eight grade English class when our assignment was to write sentences using seventeen words, so I carefully constructed one sentence which contained all of the words. Don't remember how my teacher reacted, but I enjoyed that challenge, and with the "Empty boxcar words" I saw a chance for a repeat performance. I wrote this sentence to Jeff, hooking together all his empty boxcar words, including a bold split infinite.

Personally, I think that, going forward, it should be noted that you have actually made this particular case quite well, but, I would urge you to basically reconsider the position you are taking currently because, frankly, I believe that fully half of your readers will be just put out, while definitely reading the piece with interest.

I suppose I might compose one sentence which hooks together examples which violate all eight of the English teacher rules, but anyone who reads my writing long enough will find examples enough. Even sentence fragments. So what?

Here's how Walsh addresses two issues that I have noticed myself and I agree with his positions:

[page 69] THE FIRST PERSON: It's often inappropriate to write I this and I that, but once you decide to be the center of attention, I would rather read I than this writer or other such silliness.

ADDRESSING THE READER: In a corollary to the I think, one is supposed to avoid referring to one's audience as anything other than one. You know that's ridiculous, right?

Walsh says that the plural of person is people, and those who differ are silly pedants. Only a dummkopf would have a person say aloud, "How many persons do you think are in this room?" No one talks that way, so why write that way?

As for cliches, Walsh seems of two minds, which itself is likely to be a cliche, referring to a person who takes two positions on a subject. I like the position that Steve Coll takes: use cliches as place holders for first drafts. There is no better way to dispatch a cliche to oblivion than by replacing it with a carefully handcrafted expression of what you really mean.

[page 141] Steve Coll, managing editor of the Washington Post, has described cliches as first-draft placeholders. You know the point you're tying to make, so you reach for the handiest way of making that point. Later, you go back substitute a better way of saying what you want to say.

"Every word was once a metaphor," Ralph Waldo Emerson wrote, and if we forget that, we can be confused on what is a word and what is a cliche. The word cliche is itself a metaphor referring to a stereotyped expression. Over time and long usage metaphors evolve into words and words cannot rightly be called cliches. Phrases are different and Walsh analyzes "misery loves company" as a cliche, but in trying to write without using it, he shows us how the piece can lose its vibrancy, its punch, if you will allow me a cliched boxing expression. The best thing to do, if you must use a cliche, is to let the reader know you know it's a cliche, perhaps by doing a twist on it like his example on page 142, "Misery loves company, and it appears to be especially fond of PluggComm Inc."

For me, the problem with using a cliched expression like "my love is like a red, red, rose" is that you are using someone else's words to describe a unique experience that only you know intimately, and it behooves you to create a unique expression out of yourself that will surprise and delight both you and the world. This process involves hard work, but its results can be gratifying. If you call yourself a writer, you must be able to answer "YES" to Annie Dillard's famous question to an inspiring writer, "Do you like sentences?" Since encountering that question, I have come to call my final-proofing of my work, "Playing with sentences". It is the process which I am doing right now as I add these sentences of reference to Dillard in this review.

If you write as part of an organization, you will have to deal with some kind of style book which describes how you should write, and Walsh's Elephants of Style book will help you understand some of the big issues you will have to deal with. For example, you will learn to avoid making everything generic or you might be subject to this kind of rebuff, "A pottery barn look? Hold everything! Did the editors fall into the gap? They should be tied up with linens and things and sent to bed, bath and beyond!" To see if the lack of required capitals led you astray, go back and identify four retail companies hidden in the above quotation from page 27. This is the kind of fun you can have in this book; so remember, while elephants may be workhorses hauling logs for a lumber company in Myanmar, they can also be a lot of fun to watch in a Ringling Brothers circus in your hometown.