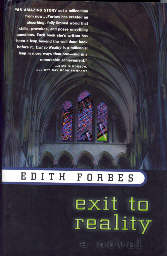 The good news is that your body will be regenerated and you will in effect live forever. The bad news is that you will never see your mom and dad and unregenerated friends ever again. That's okay, you think, because they will die shortly anyway. This is the type of world that our heroine introduces us to. Euclid, her email name, or Lydian, her real name, lives in the future about 1,000 years and lives with her Mom. Oh, not her real mom who died years before, but robot Mom who is programmed to do all the things that real Moms do, mainly try to keep themselves from going crazy with only 45 minutes of housework to do every day.

[page 51] My Mom cared about one thing, me. She had been programmed to believe that only two things really counted toward my happiness, a career and a man. She had also been programmed to avoid, whenever possible, asking a direct question about the two things that really counted. Her code included a multi-gigabyte array of hints, insinuations and circuitous logic, all designed to get answers without asking questions.

Sounds like her Mom was the expert of the "unasked question" — the natural corollary to the "unanswered question" — which is a technique I recommend for leaving questions unanswered in order for one's creative juices to work miracles on them. But rest assured that Lydian's Mom is only one of several versions available. After three days in Paris with Proteus, Lydian's new friend boy, Shelley's Mom would have asked, "Did you sleep with him?" Another friend's Mom would have said, "I'll be happy to hear anything you have to tell me about him." But Lydian's Mom while never asking a question, would never drop the subject till she had gotten an answer. I think I would have liked Shelley's Mom version the best of the lot.

Now Proteus, aka Merle — his real name, has discovered this curious ability to change into other people, and in Lydian, he has finally found someone who he can trust with his secret. Well, he can after Lydian gets over being spooked by this curious behavior that can have Merle appearing as a redheaded floosie one second and a male Adonis the next. Plus Merle has found that he can transport him and Lydian anywhere in the world instantaneously, a feat that would have been more fun but for the Security Police who keep track of everyone's whereabouts, and become very perturbed by this cyber-AWOL couple that keep sliding around between the cracks.

Between the cracks is an excellent description for what they do. Mom is very upset to find that Lydian's new friend boy is a friend girl (since Merle finds he likes the redheaded persona best), and that they had gotten married before letting Mom know. All her cyber-chips were in an uproar, and she had already selected the Adonis version of Merle who had visited her earlier for Lydian.

Soon the mystery begins to unravel, and since an unraveling yarn is an ugly sight, unless you are doing the unraveling yourself, I will leave it to you to find out, as Paul Harvey loved to intone over the AM airwaves, the "rest of the story."

This is a brilliant novel, craftily plotted orchestrated and exquisitely orchestrated. What is the secret behind Merle's powers which he soon teaches Lydian? Why are the Security People upset? Why did the perfect Mom drop an object? What is the reality behind reality? These and all your other questions will be answered, but first let me say, "911 — Exit to Reality."


Exit to Reality, A Novel by Edith Forbes, A Reading for Enjoyment ARJ2 Review by Bobby Matherne