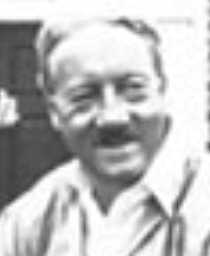 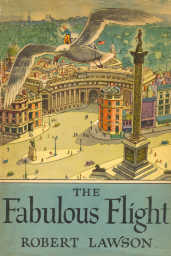 The Fabulous Flight of Peter and Gus
by
Robert Lawson

When I was about ten to twelve years old, my only source of non-school books was the Westwego Library, a twelve-by-twenty foot one-room library with my favorite all-time librarian Mrs. Lawson. I could walk to the library, spend hours among its stacks, and select as many as five books to take home with me at one-time. And I always managed to take home the maximum. Fifty years later, I went to the opening of our large Westbank Regional Library near my current home and the Councilman, James Lawson, who helped bring it to reality talked about his mother who was a librarian. I went up to him after the opening ceremonies and told him that his mom was my favorite librarian. He said, "Why don't you tell her? She's right over there." I walked over to her, overwhelmed with feelings at the thought of seeing this lovely lady of my childhood once more. She remembered me this way, "I always wondered if you read all those books you took out or if they just stayed stacked on the top of the icebox."

One memory of Mrs. Lawson sticks in my mind. It was the day I took out this illustrated book about a fascinating little character named "Spiro" (he had a spiral-shaped tail) who bored into the skin with his tail and then had adventures throughout the human body, even coming into the eyeball. I recall the curious look Mrs. Lawson gave me when she singled out that book among the five on her desk to inspect carefully. She let me check it out, but that look remained vivid to me and remained an unanswered question in my mind until I got to college. There, working in the LSU library as a freshman re-shelving books, I scanned this book on syphilis, and discovered that my old childhood friend Spiro was a syphilis virus, which indeed does enter the skin with its corkscrew-shaped tail. It then travels through the body causing all sorts of problems including blindness.

One of the other books I checked out through Mrs. Lawson was this book about Peter and Gus. My first name is Robert and her last name was Lawson and that happened to be the names of the author. This book is my favorite single book from my childhood reading. Later when Robert Lawson's other book, "Ben and Me", about a mouse who befriended Ben Franklin and helped him invent bifocals and discover electricity, was made into a cartoon movie, I wished that they had chosen this book which I remembered as “Gus and Me” for its subject instead. To my knowledge, no movie has ever been made of this book. It was the Harry Potter book of my childhood, and it was only one short 152-page book, with hand-drawn pictures by the author.

As I was studying and writing a review of Rudolf Steiner's Four Mystery Dramas, the Spirit of Johannes' Youth appeared and talked to the adult Johannes about promises made to him. The first thing I thought of was Dickie from Richard Bach's Running From Safety because it was a similar process: Dickie appears to adult Richard to remind him of a promise he made fifty years previously and promising dire consequences if Richard didn’t live up to his promise to himself as a little boy fifty years earlier.

Then I went into a pensive mood where I wondered about my twelve-year-old self. Was there some promise I made to myself that lay unfulfilled some fifty-plus years later? The image of "Gus and Me" arose in mind as a book of that time which had greatly impressed me. Perhaps in that book, in the process of re-reading that book, I would find the answer to my question.

My search for the book was interesting. I thought that the author was Robert Larson and couldn't find the book that way. As an adult I couldn't believe it was the same spelling as my favorite librarian's name, Lawson, which I had recently confirmed by meeting her. Then, using either spelling of the author's name, I couldn't find a book named "Gus and Me." When I located it under the title, "The Fabulous Flight," I realized that the title of the book never stuck with me as much as the character of Gus, the seagull, and the sound of the name of the author. But it was enough.

I found and ordered a First Edition of the book published in 1949, so that I would have in my hands the very size, shape, and feel of the book I held in my hands as an elevenish young boy when I last read the book.

What I found in the book was not unfulfilled promises, but many examples of fulfilled promises which arose in me when I first read the book. I found a world full of amazing things which I wanted to see and experience when I grew up, and many of those I have already.

Not from the back of a seagull, but from the seat of a 747, or the height of a tall bridge, or the side of a mountain such as the view of village along the Rhine River from the breakfast room in Burg Rheinstein, perched a thousand feet above the river bed. In each of my adult adventures, the awe and breath-taking glory of the world fills me now just as it did my eleven-year-old self. My promise to myself was never to lead a dull life, but to push the envelope as Peter did as he grew down.

Yes, while other kids were growing up, Peter grew down. He shrank, but as he did so, he didn't complain, he made the best of it. His father's hobby was making miniatures and he asked Peter to help him. Imagine having Peter's small hands tying the lines on the tiny sailing vessels his father liked to make! His father made him a saddle, at Peter's request, for him to ride safely on Buck the jackrabbit. Also some buckskin chaps to protect his legs from chafing. Then a Peter-sized sailboat upon which Peter met his new friend, Gus, a seagull who liked to get away from the wharfs at Baltimore for freshwater adventures from time to time and sidled up to Peter while he was resting on his sailboat one day.

Soon his dad was making a cabin for Peter to mount on Gus' back for his flying adventures. I expect that after Peter's animal-friends army drill upset his mom and dad's outdoor party, his dad was happy to have Peter in the air force instead. And when the world needed someone to extract a deadly weapon of mass destruction from an armed fortress in a tiny European country, Peter volunteered himself and Gus for the James Bond-type mission. The single grain of explosive was small enough for Peter to steal the deadly substance from the thugs who had taken it from its inventor and were threatening the world with it.

So, if you're ready for a wild ride on the back of a jackrabbit being chased by beagles on the hunt, or for a James Bond flight on a seagull into hostile territory, or for an exciting trip into your own childhood, grab a'hold of this book, hold on tight, and start reading. . . .