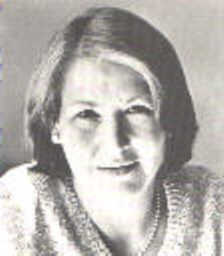 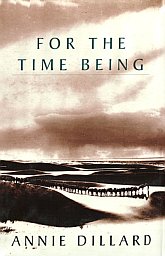 For the Time Being
by
Annie Dillard
Published by Alfred A. Knopf in 1999
A Book Review by Bobby Matherne ©2000


Come with me and follow Annie Dillard into that wildest of spaces – that "deep-sea vent . . . where the people come out" – the maternity ward at the city hospital where "a blue baby-shaped bunch of cells" comes out "between the two hands of Dr. C. Lamont MacMillan." Or to Peru where a man is asking Alex Shoumatoff, "Isn't it true that the whole population of the United States can be fitted into their cars?" Or to the 19th century where the innocents sang "A Bicycle Built for Two" and endured evils such as slavery, civil war, and bacterial infection that do not "seem so vividly terrible as our own evils." We who live in a dark room where the "blue light of television flickers on the cave wall" and "read Consumer Reports every month." We who follow with religious precision whatever passes for the wisdom in our time. "Americans place infants on their backs now – never on their stomachs, lest they smother in their sleep and die. Ten years ago, American placed infants on their stomachs – never on their backs, lest they choke in their sleep and die." We hear Annie mumbling, "soon the continents would roll us under, and new sets of people would trample us." Just as the Chinese trampled over the ten thousand terra cotta soldiers buried for centuries under a field in their countryside.

"Does anyone believe the galaxies exist to add splendor to the night sky over Bethlehem?" she asks us as we march into page 73. "Yes, I do," I answer and you look at me puzzled. "Purity's time is always now," Annie whispers into our ears, and then reads the words of Joel Goldsmith to us, "God has nothing to give you that he is not giving you right now." Or taking from you right now apparently:

"Does anyone believe the galaxies exist to add splendor to the night sky over Bethlehem?" she asks us as we march into page 73. "Yes, I do," I answer and you look at me puzzled. "Purity's time is always now," Annie whispers into our ears, and then reads the words of Joel Goldsmith to us, "God has nothing to give you that he is not giving you right now." Or taking from you right now apparently:

[page 91] This hospital, like every other, is a hole in the universe through which holiness issues in blasts. It blows both ways, in and out of time. On wards above and below me, men and women are dying. Their hearts seize, give out, or clatter, their kidneys fail, their lungs harden or drown, their brains clog or jam and die for blood. Their awarenesses lower like lamp wicks.

We lower our eyes like lamp wicks as she balefully focuses on the physical side of life. Baleful, until she relates the words of Teilhard who talks of the stone that is not a stone, "I don't know why but geologists have considered every concentric layer forming the Earth except one: the layer of human thought." With "no thought but man's thought" he asks how we could consider any philosophy where man is not the "key to the universe." But "what are we doing here" she asks plaintively and notes that science is mute on the question. Science cannot account for spirit by matter, she says, but Teilhard's top-down notion starts from God and shows that "one can indeed account for matter by spirit." What's that? Oh, it's Annie giving one of her pertinacious facts again. Listen up.

[page 101] Volunteers in famine lands, and rescue workers who haul people from rubble and wrecks, say that those people who are near death have a distinctive look in their eye. They call it "circling the drain."

The current popularity of news programs of disasters, airplane wrecks, earthquakes, spectacular car crashes – how would Annie explain that? Looking up from the books on her lap, we hear her quote from two of them.

[page 109, 110] "For man, maximum excitement is the confrontation of death and the skillful defiance of it by watching others fed to it." Ernest Becker said this in The Denial of Death. Ralph Touchett, in The Portrait of a Lady, says, "There's nothing makes us feel so much alive as to see others die. That's the sensation of life - the sense that we remain." So I watch from the stern; I attend the wake.

All the while, "we live on dead people's heads" she says as we tiptoe across the archaeologists dig in a suburb of St. Louis where they are unearthing thirteen settlements, "one on top of the other, each of which lasted longer than St. Louis has."

If we come from dust and are destined to become one with the dust, why are we here? Let's ask Annie – what would she say? "We are earth's organs and limbs; we are syllables God utters from his mouth."

[page 156] How to live? "The only worthwhile joy," Teilhard wrote in one of his thoughtful, outrageous pronouncements, is "to release some infinitesimal quantity of the absolute, to free one fragment of being, forever."

Christian mystic, Chinese Buddhist, and Jewish Rabbi whisper sweet somethings into Annie's ear and we wait patiently while she blurts out what she has learned. Rabbi Isaac Luria says God didn't extend himself, but withdrew from the world of necessity leaving it to us to handle. Tillich tells us that true prayer is surrender to God. Rabbi Pinhas exhorts us to remember that "the soul teaches incessantly, but it never repeats." Perhaps there is an evolution of consciousness, after all. "Plunge into God," she repeats to us Teilhard's words. Look, there is Son Master Chinul, he's giving Annie advice on how adept people conduct themselves, "In everything they are like empty boats riding the waves . . . buoyantly going along with nature today, going along with nature buoyantly tomorrow." Was he describing us, Annie? Annie? Where did she go? Oh, there she is in the stern of the boat attending the wake again.

[page 175] Our lives come free; they're on the house to all comers, like the shopkeeper's wine. God decants the universe of time in a stream, and our best hope is, by our own awareness, to step into the stream and serve, empty as flumes, to keep it moving.

Are we but flumes in which the stream of time flows, as Annie asks? If so how can she say that, "We live on mined land. Nature itself is a laid trap. No one makes it through; no one gets out." Which are we the eternal flume through which time passes or the prey of a relentless hunter? Where is the meaning in life? Lucille, Teilhard's dearest, wrote, "Friendship is no doubt the highest form of love – and also very difficult." (page 193) Again and again she provokes us with paradox, this Annie, saying one thing and then the very opposite – has she no sense? We've about had enough of this – we're leaving . . .

[page 197] Many people cannot tolerate living with paradox. Where the air is paradoxical, they avoid breathing and exit fast.

Yeah, that's what we would like to do – exit fast from this book of Annie's. It is chock full of paradox and lugubrious images. Like the earth plowing us under. How can she justify that?

[page 203] Ours is a planet sown in beings. Our generations overlap like shingles. We don't fall in rows like hay, but we fall. Once we get here, we spend forever on the globe, most of it tucked under. While we breathe, we open time like a path in the grass. We open time like a boat's stern slits the crest of the present.

Yes, I see that slit – it's the slit in which we seed ourselves and grow like wild things – wild flowers, each blooming in its own season and fruiting in its own time. Rightly understood, we are like the water molecules in the wave split by the stern of the boat – we move up and down in that waving wake, but when the wake has passed we are the stuff that remains, we are the spirit that endures.