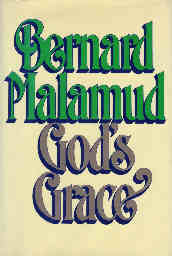 Unfortunately my book of reviews does not have a chapter entitled "Reading for Punishment" so it will have to go in the chapter "Reading for Enjoyment" which is a stretch if ever there was one. A friend suggested that I read this book because she had just finished her second reading and had no one to discuss it with. It troubled her deeply and she wished to hear what I might think of the book.

The hero of the book is Calvin Cohn, or CC Rider as I call him. Ole CC is riding the ocean bottom when the world ends. What a splendid opportunity for this Jewish man! He is the only one to survive the Second Flood, the new Holocaust, the Day of Destruction! Alone on an island he begins talking to God, angels, chimps, a big Gorilla, and baboons. His first companion is a male chimpanzee and he teaches him how to become a good Jewish citizen, even though the chimpanzee insists on wearing a golden cross around his neck and talking about God's Son. But that doesn't deter CC Rider from celebrating a Seder supper with his chimp boy friend and listening to records of his cantor father singing Kadish, while George the big gorilla thumps his chest in a nearby tree. CC successfully resists his homosexual impulses, but when his boy friend chimp finds a girl friend chimp, does CC rejoice over his horny friend's good luck or does he grab the girl and run? Yes, dear friends, CC mates with the CAP (Chimp American Princess) and fathers her child, only to have the tender little female Chimpo-American baby later bludgeoned by brachiating chimps who drop her onto a rock.

What does this lead to? To an altar at the top of the mountain where CC Rider gets his throat cut and bleeds to death while George sings Kadish for him.

Surely there's a message here somewhere, but like ole CC waiting for God to rescue him, the reader will likewise wait in vain.