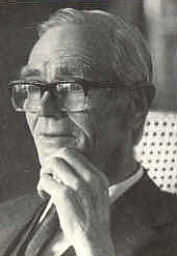 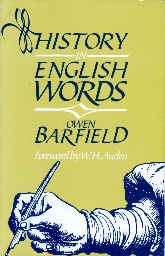 Foreword by W. H. Auden
Published by Lindisfarne Press in 1967
A Book Review by Bobby Matherne ©2003

The title History in English Words can mean many things, so let's look at what Barfield says about how he chose the words in this book (from page 25):

Consequently the words chosen are not the most useful one, but those which are the best telescopes  here the endeavor is . . . not to think about the past, as it were, but to look at it.

Looking at the past through the telescope of words and the trained eye of Owen Barfield, I can see afresh the bright landscapes of our linguistic history.

If a math professor tells his class there will be a test tomorrow, or the football coach tells his team that they will be put to the test in their next game, how many of us would imagine the class or the team being placed into an earthen pot or testa where an alchemist constructs alloys from raw materials by appropriate mixing and heating? Barfield brings us to see words as sound bytes or video clips of our English heritage.

In the simple word culprit, we get a view of the Clerk of the Crown opening the proceedings in a criminal trial thus: "Culpable: prest" by which he indicates that the defendant is guilty and he is ready to prove it. The two words were eventually shortened to culprit.

Owen Barfield apparently wrote this book sometime in the 1920's although it wasn't published until later. His frequent usage of the word Aryan indicates a pre-Hitler era origin of his writings in this book. On page 63 Barfield uses the word energy is an outmoded way, "the Hundred Years' War was occupying too many of our energies." [italics mine] Today that would be phrased, "occupying too much of our energy." One can thus see the history in English words even in a short 50 year time span, but over longer years, the meanings get much more diverse, and Barfield, as a word-archaeologist, sifts through the sands of time and comes up with original meanings and derivations.

Who would have suspected that the word cabal was originally an acronym, standing for the last names of five men who signed a treaty with France against Holland? Or guessed that accidents originally referred to the parts of bread and wine that remained unchanged after their transmutation into the Body and Blood of Christ? Or that zodiac came from the Greek word for little animal, zodion? Or that monster stems from the Latin moneo which meant an oddity sent as a divine portent. One can only look with awe at the appropriateness of the word in Mary Shelley's book about Dr. Frankenstein's creation.

We learn that, "as words are commonly employed, the Latin form has grown more concrete and the Greek more abstract and intellectual." All of which is raw material for new ideas and connections to be forged in that testa or tête between our own ears, in which Barfield is putting us to the test.

In bringing together and infusing these dead metaphors with life, Barfield seems to be doing what his quote of Edward Young on page 215 describes, "the pen of an original writer, like Armida's wand, out of a barren waste calls a blooming spring."