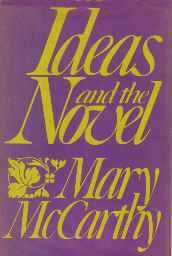 After reading the autobiographical How I Grew, I decided to buy this book in which instead of talking about how she was growing up, she writes as a grown up. Instead of being meta to her life growing up, she is being meta to the books she's read along the way; writing about novels from her perspective as a reader and writer of novels; writing about authors as a reader of authors and an author herself.

Her thrust is given succinctly in the title, ideas and the novel, and her first line of the book seems to be a battle line:

She says that she offers this as a "motto or, rather, counter-motto" for the content of the book to follow. Her explanation of what Eliot meant helps us to catch a glimpse of the state of the novel in 1918 and its evolved state today, at least of how the work we know as a novel is held in esteem.

[page 3] The young Eliot's epigram summed up with cutting brevity a creed that for modernists appeared beyond dispute. Implicit in it is the snubbing notion, radical at the time but by now canon doctrine, of the novel as a fine art and of the novelist as an intelligence superior to mere intellect.

At this point, dear Reader, you and I may both be unable to discern whether Eliot was complimenting James or not, but the author comes to our aid a dozen pages later.

[page 15] In the reaction against the Victorian novel, it was natural that the discursive authors, from Dickens to Meredith and Hardy, should stand in the pillory as warning examples of what was most to be avoided. When the young Eliot complimented James on the fact that no rough bundles of concepts disfigure and coarsen his novels, he at once went on to cite Meredith ("the disciple of Carlyle") as a bad case of the opposite.

One needs a strong liberal arts background and an unabridged dictionary to wade through such words as cloaca (discharge cavity of reptiles, fish) and reddleman (a dealer in red ocher) in order to come to terms with this author. But there are times when her words and phrases literally sing themselves off the page and pay back one's thumbing efforts, such this squib on Meredith:

[page 16] Brio was not enough. In any case, his way with ideas, wavering between persiflage and orotund pronouncement, was too unsteady to maintain a serious weight.

When she takes on Victor Hugo, she focuses on his Les Miserables, especially on how Hugo never lets us eavesdrop on Valjean's thoughts except in two key internal dialogues he has with himself.

[page 38, 39] In these two interior dialogues lies the heart of the book, which is a story of pursuit. Jean Valjean's bodily pursuer is Inspector Javert, who can be evaded and finally done away with; his moral pursuer is the truth, which hunts him down in his last retreat, his conscience, where after many vicissitudes he had good reason to believe himself safe.
That is the idea of the novel. As Hugo himself formulates it in a characteristic passage, "A man's conscience is that bit of infinity he harbors in himself and against which he measure the violations of his brain and the acts of his life."

In her essay on Stendahl's Red and Black, she tells us that Julien's passion is the "Little Corporal who made himself Emperor, rudely gesturing aside the Pope and putting the crown on his own head" and when he hangs with those who despise Napoleon:

[page 67] He must hear him referred to as the "usurper" ("l'usurpateur") or as "Buonaparté," a pronunciation of the Corsican family name that brings out the wop in him. They will not speak of him as "Napoleon," which is a reminder of his imperial title  only kings and Emperors are known by their Christian names; thus Louis XVI was guillotined as "Louis Capet."

She goes on to talk about Balzac's treatment of Napoleon in a way that is so similar to Stendahl's that it makes her wonder if their books are not an extension of each other, both dealing with the "idea of Napoleon" which seemed to pervade the 19th Century:

[page 72-74] . . . one wonders whether is it not a single book, one and indivisible, that one has been reading, whether in fact all the novels of the century do not refer, each in its own way, to a governing idea  Napoleon. . . . Hegel, at Jena, exclaimed that Napoleon was "an idea on horseback" . . . To many minds, Napoleon was not just the man of destiny but destiny itself in a tricorne.

Reading McCarthy's book is like walking through a library where ideas float out of novels as one passes and announce themselves to you. Here is Dryden in 1697 telling us what it meant to be a Genius, back when the word was so new, it had as yet no plural form and it had to be explained when one used it in writing, especially, she says, "before there was a Napoleon to flesh it out on the world stage":

[page 79] "Extraordinary Genius's have a sort of Prerogative, which may dispense them from Laws." Dryden was thinking of art and literature, where genius had a license, recognized at any rate in English-speaking countries, to break rules.

This passage evokes the theme of my essay, "Art is the Process of Destruction," in which I attempt to explain how the function of true art is to destroy the sameness that it finds around it and, by doing so, to release exciting possibilities that hitherto were unknown. From those exciting possibilities unleashed by one human being, a bandwagon effect begins in which where once in the beginning of the 19th Century, there is one Napoleon, soon there are many Napoleon clones, until finally in the 20th Century, such clones, tricorne and all, are pacing about, not as ideas on horseback, but as maniacs in a mental ward.

One such Napoleon clone appears in Dostoievsky's Crime and Punishment - Raskolnikov.

[page 87, 88] It will be not surprise to you to hear that on Raskolnikov's list of extraordinary men who were also criminals the familiar name of Napoleon figures. On that honor roll are leaders and legislators who "transgressed the old law" in order to make a new one and shed innocent blood in the process  that is only to be expected, Raskolnikov argues. Otherwise it would be hard for them to get out of the common rut; "and to remain in the common rut is what they can't submit to, from their very nature . . . and to my mind they ought not to submit to it."

And lucky for us, McCarthy tells us, Raskolnikov is the last time we meet in fiction a visible manifestation of the ruling idea of Napoleon.

[page 91] After this, if we meet his avatars, immersed in the Memorial or joying in his crimes, it will be in a madhouse.

The next idea that she covers tickles me so much that I must share it with you. It's from Mr. Gradgrind in Dickens' Hard Times. He is the epitome of the know-it-all teacher who has a one-track mind that remains in his own common rut  and his rut is "Facts". "Teach those boys and girls nothing but Facts." What does this kind of "Genius" create when he squeezes his young charges through the eye of the needle he calls "Facts"?

[page 115] Here is a definition of a horse, given by a boy pupil, that he is able to commend: "Quadruped. Gramnivorous. Forty teeth, namely twenty-four grinders, four eye-teeth, and twelve incisors. Sheds coat in the spring; in marshy countries, sheds hoofs, too. Hoofs hard, but requiring to be shod with iron. Age known by marks in the mouth." This sounds like the idea of a horse rather the fact of a horse. It is as though a drawer labeled "Horse" containing miscellaneous pieces of information, dried and filleted for better storage, had been obediently opened in the filing-cabinet that constitutes the star pupil's mind. The dehydrated facts Mr. Gradgrind favors adds up to a fleshless abstraction  horse in general.
The reason for this curious taste of his is evident in his character: he insists on being in control.

And Mary McCarthy is always in control of her topic of ideas and the novel. Like love and marriage, "you can't have one without the other" and in McCarthy's hands it is a happy marriage indeed.

Other Books by Mary McCarthy:
How I Grew (Her Early Years 13 to 21)
The Company She Keeps