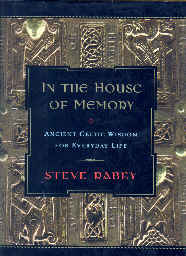 In the House of Memory
by
Steve Rabey

The ancients Celts lived in a world of spirit-filled nature long before Christianity was brought to the shores of the westmost outpost of civilization at the time, an island considered so worthless that the greatest conquerors of the time, the Romans, didn't bother to conquer it.

[page 16] If hills and rivers were believed to be the haunts of female deities, forests and groves were seen as areas where male deities frolicked. Sacred groves full of sturdy oaks with broad branches created a kind of natural cathedral, whose dense foliage gave both seclusion and intimacy to those who gathered there. As we will see, the druids were said to have officiated at rituals in the groves, and the word druid originally meant "oak knower."

"Who are you?" when asked by an Irish person means, "Of what people do you spring?" Rabey tells us as he introduces the chapter entitled "The Bonds of Kin and Clan." The answer in Ireland would oft come back as "Of the Connor clan" which quickly got shortened to O'Connor leading to the popularity of Irish names beginning with and "O" followed by an apostrophe. For ancient Celts, to be O'Connor meant to be devoted to the life of the clan, of the family, and no personal goal would have superseded that goal. The ancient Hebrews went through a similar phase of tribal loyalty around the same time. To be 'nestled in the bosom of Abraham' was to be part the family of Abraham and protected by all the members of that tribe or clan.

The druids were thought to be illiterate because they committed everything to memory and wrote nothing down.

[page 62] But, according to Ellis, the absence of written works signaled not an ignorance of the art of writing but a religious prohibition against it, "in order that such knowledge should not fall into the wrong hands."

This would make the Druids like the Gnostics in their lack of a written legacy. In the GnosticsÆ case their written materials were expunged by the Church so successfully that the only documents extant up until recent finds at Nag Hammadi were documents written about the Gnostics by those who considered them to be misguided mystics. But clearly the Druids lived farther back in time than the Romans, likely back to a time when gods and deities were still visible to human beings (as in the Page 16 passage above). They likely lived in the pre-Homeric era when writing had not come into being, because the oral tradition sufficed for story telling so long as humans could view directly the spiritual realities of the stories they related.

As worshipers of a Sun God, the Druids had been Christian before the time of Christ Jesus, so when Christianity as a religion reached them, the Druids easily became Christian. They maintained their ancient rites, only changed its meaning to fit with the new Christian theology. They had worshiped a Sun deity and found in Christ a new name for their Sun God.

[page 96] The circle was a powerful ritual symbol for pagan people, who covered the Celtic lands with thousands of stone circles and other round monuments, and who worshiped the sun as a most powerful and circular god.

Because Rome did not consider Ireland as a worthy of conquest, the Celtic peoples of Ireland, Wales, and Scotland were untouched by Christianity for several hundred years until Patrick arrived to begin their conversion. Larger than life, he is reputed to have banished the snakes from Ireland and to have used the three-leaved shamrock to illustrate the principle of three beings in one God, or the Trinity.

When I was a child we used to spend hours looking for four-leaf clovers among our local version of the three-leafed shamrocks. To find a four-leaf clover was considered most lucky, and we would search for hours until we found one. As an adult I discovered from reading Carl Jung the important of the quaternity or the completion resulting from the adding of the fourth to three. In Rudolf Steiner's works, I discovered the fourth body of man was the "I" or Ego-body. None are so lucky as those who have found their "I" - their fourth part of being human, their individuality!

What Patrick gave Ireland was a religion, a Christianity, that was built on their individuality, not upon Roman law. His wisdom made it possible for the new Celtic Christians, as Rabey tells us, to first endorse paganism, then refine it, then finally transcend it. (page 114) As for the Celtic Christian's attitude towards Rome, it is succinctly expressed in this verse:

[page 119]
Who to Rome goes
Much labor, little profit knows;
For God, on earth though long you've sought him,
You'll miss at Rome unless you've brought him.

The attitude of the Celtic clergymen mirrored that of St. Francis of Assisi, who told his followers, "Preach always. If necessary, use words." (page 127) The difference between the Celtic and Roman clerics in their attitude to their flocks is best illustrated in this passage by a twentieth century writer quoted by Rabey:

[page 139] "Celtic monks lived in conspicuous poverty; Roman monks lived well. Celtic monks were unwordly; Roman monks were worldly. Celtic bishops practiced humility; Roman bishops paraded pomp. Celtic bishops were ministers of their flocks; Roman bishops were monarchs of their dioceses. Celtic clergymen said, 'Do as I do,' and hoped to be followed; Roman clergymen said, 'Do as I say,' and expected to be followed."

About a year or so ago we joined a small group of friends in a group we call Anam Caras, a Celtic phrase meaning soul friends. At the end of each chapter Rabey provides suggestions for how readers of his book may implement in their own lives the practices of the Celts described within the chapter. When I read the following passage, I realized that he was talking about our Anam Caras group.

[page 146, 147] Form your own small community. In today's busy world, many people find personal caring and spiritual depth in small groups . . . I'm in a small group that's been meeting together, praying together, crying together, and eating together for five years. I would be a much smaller and lonelier person if it weren't for these wonderful brothers and sisters.

The passage that stuck with me was Rabey's description of the legend of Kevin, the solitary hermit who spent seven years alone in the wilds of the Wicklow Mountains, before returning to civilization to found the monastery of Glendalough. From this legend came the practice of the cross vigil in which monks would extend their arms as Christ's were extended on the cross in order to experience some of the pain Christ Jesus did on the cross.

[page 162] Legend has it that Kevin practiced the cross vigil with such single-minded devotion that a blackbird from a nearby tree came and built a nest in his hands, laid a clutch of eggs in the nest, and roosted until baby birds were born. Through it all, Kevin kept at his prayers, so rapt in devotion that he either failed to notice what the bird was doing or refused to let it deter him from his prayers.

At the end of his chapter on Continual Prayer, Rabey gives prayers for "Praying with the Celts" among which was this prayer for a blessing before meals:

[page 174] May he who has given us this food, grant us eternal life to our souls and to the souls of the seven generations who have gone before us.

As I read this prayer, I realized that seven is the number of fulfillment, and wondered about the seven generations of Mathernes who have gone before me in my family. I checked the genealogy of my family tree and found exactly seven generations have gone before me that were born in this free land of America within fifty miles of where I sit today writing this review.

The next prayer from that same section seems appropriate for the turbulent times that we are experiencing today in the Fall of 2001:

[page 176] The Celts lived in turbulent times, and they had an awareness that death could strike them at any time. They wove this concern into their entreaties:

I place my soul under your protection O Lord; save me from sudden death. Praise and thanks be yours forever.

The metaphor of life as a spiritual journey was taken literally by the Celtic monks who severed all their social ties and walked out of their monasteries into the wilderness, never looking back. "The greatest heroes of Irish monasticism were vagrants." (page 202)

The Book of Kells is a collection of illuminated texts from the Gospels that are prized as a great ancient masterpiece.

[page 210] The spectacular Book of Kells features dizzying images, which were designed to present basic Bible lessons to people for whom literacy was new. More an artifact of veneration than a document for reading, the book was at once a work of utter devotion to God and a testimony to the near-magical properties of the written word.

In a chapter called "Soul Friendship" Rabey elaborates on the concept of anam cara that I had mentioned earlier.

[page 232] Anatomy of a soul friend. The term soul friend comes from the Irish term anam cara, and means "one who shares my cell." Quite literally, soul friends were often cell mates, who prayed together and worked alongside each other during the day and slept in the same simple hut at night. Usually, the abbot of a monastery would assign an older monk or nun to look after and guide a younger brother or sister, so that one's soul friend was more than a roommate, and more like a personal mentor or minister. Most of the well-known Celtic saints had soul friends who helped and guided them. In turn, these same saints served as soul friends and mentors to others. Through this informal but influential network, the Celtic Christians passed on the faith and disciplined one another. The soul friend provided comfort or correction, as the situation demanded.

In Rabey's closing chapter "Care of the Soul" he give suggestions he calls "Preparation for the Inevitable" and recommends that we "Picture death as a beginning, not an ending." He tells us about the Venerable Bede, a monk of the eighth century who wrote the definitive history of the Celtic church, when he saw the nearing approach of death:

[page 260] When Bede sensed his own death approaching, he welcomed it with open arms as "a heavenly birthday." Bede's faith in thing unseen overcame the fears that naturally resulted from seeing the only life he had known slowly ebbing away.

Together alongside John O'Donohue's fine book Anam Cara that I read and reviewed earlier, Rabey's book makes a fine addition to the library of anyone who is either Irish all year long or only on St. Patrick's Day.