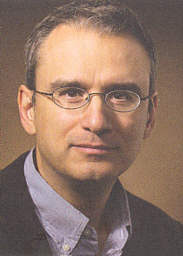 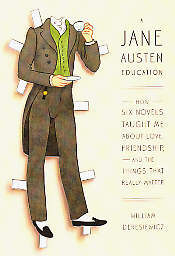 A Jane Austen Education
How Six Novels Taught Me about Love, Friendship, and the Things That Really Matter

ARJ2 Chapter: Evolution of Consciousness
Published by The Penguin Press/NY in 2011
A Book Review by Bobby Matherne ©2011

When I met the author he was lecturing about this book, and he began by saying, "The first Jane Austen novel I read was Emma, and it was a breakthrough to me!" His words took me aback because it could have been me saying those exact words. I discovered Emma in James Boyd White's book, When Words Lose Their Meaning around 1987. My breakthrough came as I was reading the final chapter of Emma — something had been puzzling me and suddenly I realized what it was: Austen was writing about feelings! Didn't I have feelings? Sure, but I considered them personal experiences which I rarely shared or talked about, and here was a novel in which they were openly discussed and valued. Emma the novel was a gem, and one of its character aptly described the eponymous heroine, "Two letters that mean perfection: Emm-a." Sitting there during the lecture I was listening to a man who appreciated Emma's perfection as much as I did — not that Emma was perfect — but that she led others on their own road to perfection in the course of the novel. Undoubtedly she did that for Bill Deresiewicz and me, likely for many other readers. As this book describes what six Austen novels taught him, I had to get a copy for myself and this review is my experience of reading his delightful and insightful book.

Here is his great beginning paragraph:

[page 1] I was twenty-six, and about as dumb, in all human things, as any twenty-six-year-old has right to be, when I met the woman who would change my life. That she'd been dead for a couple of hundred years made not the slightest difference whatsoever. Her name was Jane Austen, and she would teach me everything I know about everything that matters.

Bill was working on a Ph. D. in English literature, but the one area he said, "that held no interest for me, that positively repelled me, was nineteenth-century British fiction." Generally I've found that things that repel me are things which are good for me, things that have a lesson to teach me. The best example I can think of was Dr. Smith on the 1970s CBS sitcom, Lost in Space. He was always carping about something being wrong in a high-pitched whiny voice. I couldn't wait for him to get off screen so the more likeable characters could appear — I liked them. One day I was talking a good friend, Gary Booth, during a lunch break and the subject of Lost in Space came up. I gave Gary my rant about Dr. Smith and Gary said, "You know, Bob, often the things we don't like about some people are the very things we are doing to other people out of our awareness." I began to protest, but if I had done so, I knew immediately that I would doing Dr. Smith! I struck dumb by this simple revelation, and am eternally grateful for Gary having the courage to tell me that. After that my interest in Lost in Space seemed to disappear as if I had gotten all there was for me from the sitcom. The very thing that repelled me was the thing with the greatest lesson for me. Jane Austen was Bill's "Dr. Smith".

[page 1,2] What could be duller, I thought, than a bunch of long, heavy novels, by women novelists, in stilted language, on trivial subjects?
The very titles sounded ridiculous. Jane Eyre. Wuthering Heights. Middlemarch. But nothing symbolized the dullness and narrowness of that whole body of work like the name Jane Austen. Wasn't she the one who wrote those silly romantic fairy tales? Just thinking about her made me sleepy.

Bill goes on to talk about how hard he was to get along with and his descriptions remind me of when I was his age, about 29 or 30.

[page 3] I was also oblivious to the feelings of the people around me, a bulldozer stuck in overdrive, because it never occurred to me to imagine how things might look from someone else's point of view.

The way I learned to see things from others' point of view was several years after Gary's kick in my pants when I set out on a path of personal discovery through studying psychotherapy. At some point, I realized that I was systematically looking away from people's faces when I said or did something which upset them. This was a remarkably fine-tuned skill which allowed me to upset other people and never know how or when I did so. I might do like Bill and "never let anyone finish a sentence and deliver my opinions as if they'd come direct" from God. People would get upset, but I never once saw their faces express those inescapable and evanescent grimaces, which my quick reflexes saved me from experiencing. Thus, I was spared from getting the very feedback which was essential for me to get along with other people. So immersed in my own feelings, it never occurred to me that I was creating feelings in other people which were hurting them. That insight did not come so quickly as the one which Gary gave me, that took a decade or so, and discovering Emma helped me because of the attention the novel gave to people's feelings, something I had never encountered in a novel before.

What I was concerned with were ideas, big ideas like quantum mechanics, systems design, computer hardware and software, psychology, general semantics, etc. I had no time to spend thinking of other people's feelings. Yet, here in Emma was Jane Austen asking me to pay attention to what I considered minor things in life.

[page 13] Those small, "trivial", everyday things, the things that happen hour by hour to the people in our lives: what your nephew said, what your friend heard, what your neighbor did. That, she was telling us, is what the fabric of our years really consists of . That is what life is really about.

What life is really about is not those everyday things themselves, but rather the feelings that they arouse in the person experiencing them and we do well when we allow them to express those feelings when they relate the experiences to us. Even Sir Walter Scott, renown poet and novelist, marveled at Austen's ability:

[page 18] That young lady had a talent for describing the involvements and feelings and characters of ordinary life which is to me the most wonderful I ever met with. [Her] exquisite touch, which renders ordinary commonplace things and characters interesting, from the truth of description and sentiment, is denied me.