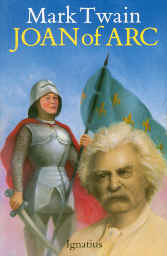 Joan of Arc
by
Mark Twain

When Mark Twain says in the Appendix and last sentence of this book that "she is easily and by far the most extraordinary person the human race has ever produced", one can be sure that he has given his reason for writing this historical documentary, a docu-drama in modern terms, of her life. Already a popular author, Mark Twain did not want his name attached to this book when it was first serialized, and he was aided in this by the apparent author of this work being identified as Louis de Conte, a companion of Joan of Arc. Thus we have in this book, Samuel Clemens writing under the pseudonym of Mark Twain writing under the pseudonym of Louis de Conte. Mark Twain also writes (under the pseudonym of Alden) the Translator's Preface, which, together with the Translator Notes sprinkled throughout the document, gives the book an aura of authenticity it would be otherwise lacking. Try for a moment to hold in one's head that one is reading the opinions of Louis de Conte written by Samuel Clemens in the guise of Mark Twain. It boggles the mind. No matter, soon we are lost in de Conte's world and find ourselves wandering in the 15th Century countryside of France with a seventeen-year-old maid from Domremy who wants to become the supreme commander of the army of France. In gentler times, she would have been called "pixilated" and ignored, but when the "pixie" is the Archangel or Spirit of the Nation of France, it is not easily ignored, and anyone driven by such a Spirit is not easily ignored, by friends, countrymen or the so-called leaders of the country, in Joan's case a shell of man who bore the title of King, but little else, up until she appeared before him.

As Mortimer Adler recommends in his How to Read a Book book, one must come to terms with an author, and in this case one must come to understand the term puissance, which means ability to sway or coerce, or coercion. England has coerced a large portion of France into submission to its will. Joan of Arc appears and tells England to go home in peace or she will apply her puissant will to encourage them to leave. She does so. Then the "stick of a man" King abandons her, she is captured by the English who apply their puissant will to her and burn her at the stake. Obviously one must read this story as one reads a Civil War account - one can hope for a different outcome, but does not expect one. But between the first voices of the Spirit of France Archangel and the burning at the stake, Mark Twain fills over four hundred pages with an engrossing tale of puissance par excellence.

If one were to be faced with trumped up charges in a court of law in this 21st Century, one could do no better preparation for that court than to read this book and learn how Joan was able to acquit herself time after time of scurrilous attempts to trip her up, to trick her to condemning herself. Cauchon, which sounds exactly like cochon, which means pig or hog, and in the verb form in French means either to produce a litter of pigs or to mess things up, was the fat pig of a cleric who led the charges against Joan. This delicious ambiguity led to graffiti of various sorts being scrawled over the walls of the city and Cauchon's chambers during the long series of trials, e. g., "The Cochon has cochoned [given birth to another trial of Joan of Arc] and cochoned [screwed up and lost the battle of wits with a 17-year-old girl] again."

After de Conte saw the apparition appear to Joan in the meadow, he asked her about it.

[page 76] "I will tell you, but do not be disturbed; you are not in danger. It was the shadow of an archangel - Michael, the chief and lord of the armies of heaven."

Joan lived during the middle of the age of Samael, the archangel ruled by Mars, whose reign is filled with wars. During this reign of Samael, the great Hundred Years war was fought and was over ninety years in progress when Joan led the fight to free France once and for all from its English conquerors. Perhaps the archangel that came to meet Joan was Samael, perhaps Michael, or perhaps an archangel that Steiner says leads every great nation, the Spirit of France. Given the subsequent outcome of his advice to Joan, one leans towards the last of the three possibilities.

This was a time when in the evolution of humanity, humans were still able to view spiritual realities, a gift that was soon to fall into disuse with the advent of the materialistic scientific way of viewing the world in which only consensual evidence of the senses is accepted. As more and more people began to doubt the existence of the spiritual realities, those left who could yet view them were looked upon with distrust. Joan found that distrust used with great effect by her inquisitors, the porcine Cauchon and a selected jury of his peers who grilled Joan both in court and in the courtyard. [Aside: rather than "throwing a steak on the barbie" as the Australians like to do, they "threw a Barbie on the stake."] Here's a passage in which Twain identifies Joan's atavistic clairvoyance, her ability to see into the spiritual world, by calling it her "seeing eye."

[page 149-150] He said the common eye sees only the outside of things, and judges by that, but the seeing eye pierces through and reads the heart and soul, finding there capacities which the outside didn't indicate or promise, and which the other kind of eye couldn't detect.

Joan, in this book, obviously has a great script writer, Mark Twain, for the things she says, such as this one:

[page 88] The wise change their minds when they perceive that they have been in error.

In one place, de Conte unknowingly speaks a prophecy, assisted by the omniscient voice of Twain, who lives 450 years in his future. He speaks of what nations do when they perceive a great truth. [NOTE: the Dwarf was a giant of a man, who left to visit his dying wife and returned to be hung as an army deserter, but Joan gave him clemency. The Dwarf learned to see Joan as France's savior and vowed to follow her orders.]

[page 181] When they love a great and noble thing, they embody it - they want it so that they can see it with their eyes; like Liberty, for instance. They are not content with the cloudy abstract idea, they make a beautiful statue of it, and then their beloved idea is substantial and they can look at it and worship it. And so it is, I say; to the Dwarf, Joan was our country embodied, our country made visible flesh cast in a gracious form. When she stood before others, they saw Joan of Arc, but he saw France.

France saw its true self when it looked at Joan. And when it looked at the United States of America, it saw the essence of Liberty and created the sculpture that today stands in the New York harbor called the Statue of Liberty, a female form. If you can see the future, prophecy is as simple as speaking about it. During the Second World War, soldiers were given nicknames using the name of the state they hailed from, Texas, California, Louisiana, etc, so the act of seeing a state when looking at a person, as the Dwarf saw France when he looked at Joan, continues today.

During one of the many trials orchestrated by Cauchon, Joan was taken into a room of torture and told to answer everything or be put to the torture of the rack. Here was her great answer that made the rack superfluous:

[page 395] "I will tell you nothing more than I have told you; no, not even if you tear the limbs from my body. And even if in my pain I did say something otherwise, I would always say afterwards that it was the torture that spoke and not I."

She was finally condemned to death on the stake and the execution was carried out. Some twenty-five years later, she was cleared of all the charges. Her promise to free France from the influence of England for a thousand years has run over half its course. Joan of Arc is the one person France can look to in history and say, without a shadow of a doubt, but for her, there would be no France today.