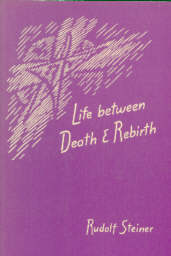 A READER'S JOURNAL
Life Between Death and Rebirth, GA# 140
by
Rudolf Steiner

This book of lectures could be entitled "Variations on a Theme of Life Between Death and Rebirth." In each lecture Steiner begins anew, proceeds over the same material, and comes to the same place. And well he might, as he is covering the same body of spiritual knowledge for the enlightenment of audiences in Milan, Hanover, Vienna, Bern, Linz, Tübingen, Frankfurt, Munich Breslau, Düsseldorf, and Strasbourg during the period 1912 through 1913. If you come to a full understanding by the end of the first lecture, you may skip the remainder of the book. But if, for you, like for me, each lecture adds new pieces to the title's cosmic puzzle, you will read on until the very last page, filling in a new piece of the puzzle here and there, and reinforcing your knowledge with every repeated explanation. 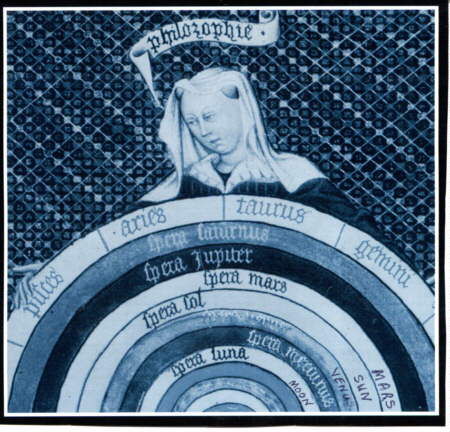 The Diagram in Figure 1 appeared on the cover of a recent Oxford University Press Catalog that I received while reading these lectures. It illustrates one of the important repeated themes of these lectures. Prior to reading Steiner, I would not have noticed the curious anomaly in the arrangement of the astronomical bodies: Earth, Moon, Mercury, Venus, Sun, Mars, Jupiter, Saturn, and the Stars [band of the zodiac]. As a physical scientist I'd have been inclined to scoff at this diagram as an artifact of the foolish, pre-Copernican, Earth-centered view of the Universe. But to Steiner this is an accurate map of the passage of the human spirit during the time between death and rebirth.

While incarnated we can move our physical bodies from place to place, carrying along our consciousness, and no two physical bodies can occupy the same space at the same time. While excarnated, our spiritual bodies fill successive larger and larger spaces, and all excarnate bodies fill the same space [to the extent of their expansion]. The first space an excarnated spiritual body fills is the Moon Sphere [Spera Luna in Figure 1.] Then it expands to the Mercury Sphere, to the Venus Sphere, etc. [Note: there is an acknowledged reversal of Mercury and Venus in this spiritual hierarchy from the physical planetary arrangement in space.]

In each sphere the excarnate human beings have different concerns. They begin with earthly concerns until they fully expand to the orbit of the Moon or the Moon Sphere. This is a period called kamaloka. Then, to the extent they lived a moral life on earth, their consciousness is not dimmed as they expand into the Mercury Sphere. As they expand into the Venus Sphere, their consciousness will not be dimmed if during their earthly existence they possessed a religious disposition. During the next phase, the expansion into the Sol or Sun Sphere, it is their understanding of the uniform basis of all religions and Christ event on Golgotha that keeps their consciousness from dimming.

Why does this newly re-incarnated spirit need to learn about life all over again as a child? Steiner points out that there's no need to be re-incarnated until the cultural conditions on earth bear no resemblance to our previous incarnation. As a child we must learn what changes have occurred during the previous cultural periods since our last incarnation.

In its spiritual existence the excarnate human being does not grow old, but grows young. The cycle of reincarnation goes from young to old in an incarnate human and from old to young in an excarnate human. In old German there was an expression for saying a child is born, "Er ist jung geworden", which translates literally, "He has become young." Goethe in Faust said, "He became young in the Land of the Mists."

Another way Steiner has of talking about the dimming of consciousness is to say that such persons are unaware of the other beings who share the same heavenly sphere as they do. Paradoxically they concurrently fill the same space as all the other excarnate beings and yet, because of their dimmed consciousness, are unaware of them and unable to contact them. They are the spiritual equivalent of a hermit on earth. The sphere at which this occurs depends on the morality, religious disposition, and the understanding of the nature of all religions possessed by a given individual. The hermit conditions begins at the Mercury Sphere if the person led an immoral life, at the Venus Sphere if the person was irreligious, and at the Sun Sphere if the person lacked an understanding of the nature of all religions especially the import of the Christ event at Golgotha.

What about materialists, skeptics that don't believe in a spiritual world? Their beliefs will be confirmed because their very beliefs will cut them off from the spiritual world. They will, due to their dimming of consciousness, be unable to contact any other excarnate humans, and will, in effect, become hermits in their period between death and rebirth. Steiner mentions several times that the Monistic Union [a organization of materialistic skeptics] will dissolve once its members have reached the Sun Sphere "because, as each of them is a hermit, they cannot possibly meet."

Kant made the statement that two things moved him deeply: "the starry heavens and the moral law within." Steiner mentions this statement of Kant's in most of the lectures, commenting that "Both are the same."

[page 75] Kant made a remarkable utterance of a man who understands morality in a one-sided way. Two things moved him deeply Ś the starry heavens above and the moral law within. Both are really the same.

In effect, Steiner is saying that we gather the moral law into us during our expansion into the heavenly spheres in preparation for our next incarnation.

Steiner tells us that we can find the source of our life if we study the time we spend between death and a new birth.

[page 53] What could be more uplifting than to know that we can discover the fount of our life between death and rebirth. We can discover our kinship with the whole universe! What could give us greater strength for our duties in life than the knowledge that we bear within us the forces pouring from the universe and must so prepare ourselves in life that these forces can become active in us when, between death and rebirth we pass into the spheres of the planets and of the Sun. one who truly grasps what occultism can reveal to him about manÆs relation to the world fo the stars can say with sincerity and understanding the prayer that might be worded somewhat as follows, ōThe more conscious I become that I am born out of the universe, the more deeply I feel the responsibility to develop in my self th forces given to me by a whole universe, the better human begin I can become.ö

I fashioned this prayer proposed by Steiner into a blessing which I have used on many occasions before meals since 1997 when I first wrote this review. I commend it to others of like minds who might wish to use SteinerÆs prayer as a blessing.

Let us bow our heads in thanks
That we are born out of the Stars
Into the Sunlight of ChristÆs presence
And that we gladly accept the responsibility
To develop in ourselves the Forces given to us
By the whole Universe in our Moment of Grace
To become the best person we can.

Another repeated theme of Steiner's lectures in this book is that of extolling the benefits of reading to the dead. This process involves reading spiritual literature while holding the face of the recently deceased person in one's mind. On page 189 he says, "One cannot really make life fruitful for them unless one feels what an immense service one bestows on the dead by reading to them." He goes on to point out that after five, six, or seven years the reading need not be in the same language as the person spoke while an incarnate being. The person will have developed the ability to understand all languages in a spiritual sense by that time.

In talking about Goethe and da Vinci's unfinished works, Steiner points out that "a person who forms a resolution but has not carried it out before his death, inscribes the fact of non-fulfillment in this [Moon] sphere." On page 260 he continues:

What has not been perfected is the seed of the following divine evolutionary process. Here we come to a remarkable, magnificent paradox. The greatest blessing for a subsequent period is the fruitful imperfection, the fruitful, justifiable imperfection of an earlier period. What has been perfected in an earlier epoch is there to be enjoyed. Imperfection, however, imperfection originating in great men whose influences have remained for posterity, help to promote creative activity in the following period.

What is the special place that Christianity holds vis-a-vis the other religions of the world? Steiner tells us on page 290:

We enter a new age . . . Among the religions of the earth, Christianity has appeared last. New religions cannot be founded anymore. Such foundations belong to the past. They followed one another and brought forth Christianity as the last flower.

And never has that last flower bloomed so brightly as in the person of Rudolf Steiner.