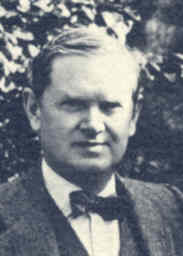 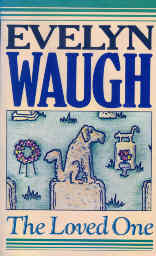 by
Evelyn Waugh
A Novel

This book is full of "Loved Ones" — every day brings new Loved Ones to the hero, Dennis Barlow, and the heroine, Aimée Thanatogenos. Each loved one gets tender loving care, whether it's a shampoo, a hair-do, a manicure and nail polish, a new smile, flesh-colored make-up, or twenty minutes to an hour and a half in the cremation oven. Dennis handles the cremations for his Loved Ones at the pet cemetery called the "Happier Hunting Grounds" which models itself after the ritzy human cemetery, "Whispering Glades," where Aimée is the"cosmetician of the Orchid Room" who does the shampoos, hair-do's, manicures, nail polish, and flesh-colored make-up for her Loved Ones. If "Whispering Glades" sounds like Forest Lawn, one can only reflect thoughtfully on this prefatory "Warning" by Waugh, "This is a purely fanciful tale, a little nightmare produced by the unaccustomed high living of a brief visit to Hollywood."

This book is by an author who once answered a question about how he wrote novels this way, "I put the words down and push them a bit." No doubt Waugh met many English actors and writers while during his brief visit to Hollywood, "Bit o' the ole sod" and all that. In this "fanciful tale" Dennis is an Englishman in Los Angeles who wrote one book of poems during the war in England and came here to be a script writer before moving to Happier Hunting Grounds. As part of the expatriate community of Englishmen, most of whom came to do movies in Hollywood, Dennis's occupation at the Happier Hunting Grounds is frowned upon by his peers, usually through a monocle. As his friend Sir Ambrose advises him sternly:

[page 11] "We limeys have a peculiar position to keep up, you know, Barlow. They may laugh at us a bit — the way we talk and the way we dress; our monocles — they may think us cliquey and stand-offish, but, by God, they respect us. Your five-to-two is a judge of quality. He knows what he's buying and it's only the finest type of Englishman that you meet out here. I often feel like an ambassador, Barlow. It's a responsibility, I can tell you, and in various degrees every Englishman out here shares it. We can't all be at the top of the tree but we are all men of responsibility. You never find an Englishman among the under-dogs — except in England, of course. That's understood out here, thanks to the example we've set. There are jobs that an Englishman just doesn't take."

And Barlow has exactly such a job, but he doesn't care — he gets plenty of time to read and write poetry while his Loved Ones take the trolley into eternal bliss. Twenty minutes for a dog or cat or parrot to an hour and a half for a goat or a sheep. After they're done, he shovels the Loved Ones' glowing remains into whatever container the bereaved owners purchased. Then it's either home delivery or being stuffed into the pigeonholes of the columbarium. Dennis also prepares the card which says something like this, "Little Muffy is waving her tail at you in Heaven tonight," which will be sent to the bereaved each year. Except for those animals who don't have tails, like a goat, then Dennis might write, "Your Billy is remembering you in Heaven tonight."

Life in the Happier Hunting Grounds has its novel moments, such as when Dennis retrieves his lunch from the refrigerator:

[page 21] At the administration building, he carried the dog to the refrigerator. It was a capacious chamber, already occupied by two or three other small cadavers. Next to a Siamese cat stood a tin of fruit and a plate of sandwiches. Dennis took his supper into the reception-room, and, as he ate it, resumed his interrupted reading(1).

Since Waugh is a Brit, it is useful to have a British Dictionary at one's side while reading the words he "pushes a bit." Without my Cassel's Concise, I would have been at a lost as to the meaning of this sentence from page 27, "He footled with a new name for Juanita and a new life-story. . ." Hmm, "foot-led" I read and wondered what in the world that could mean in the context of the sentence. I didn't find "footled" but did find "footling" which is an adjective meaning trivial or silly. The verb form must be "footle," and the pronunciation of "footled" would rhyme with "doodled". Okay, we got it! Sir Francis was "fooling around" with a new Hollywood name and persona for would-be starlet Juanita, to use the American idiom. Unfortunately there was no ready dictionary definition of "snakes-and-ladders" as found in the next passage, but Google came to rescue with "Climb up the ladders and avoid the slippery snakes. Those sneaky snakes are waiting for you! No matter how many times you play, you'll never get bored of this classic good-time game." Not classic in my life, not even present. But it formed an apt metaphor for Dennis's cut-and-paste construction of his poem.

[page 24] His poem led a snakes-and-ladders existence of composition and excision but continued just perceptibly to grow.

When Dennis, the poet laureate of the Happier Hunting Grounds, made his first visit to "Whispering Glades," as he drove through the Golden Gates that framed the entrance, he is likened to a pilgrim entering his destination, finding his destiny, at long last. In a way, he was, as he found out.

[page 38] As a missionary priest making his pilgrimage to the Vatican, as a paramount chief of equatorial Africa mounting the Eiffel Tower, Dennis Barlow, poet and pets' mortician, drove through the Golden Gates.

Dennis was arranging for his fellow Brit and roommate's funeral, and he got shown around the sumptuous grounds by Aimée Thanatogenos, whose role of handling new customers matched his own. He didn't tell her this, of course, after all, he was a published British poet. This little secret he kept from his soon-to-be girl friend indicated that he accepted the general attitude of the local Brits that his job was not an acceptable one. At one point, she asked an obligatory question before any Loved One will be accepted for burial in the cemetery. Let's listen in to hear how Waugh applies his acerbic wit to this delicate matter. Aimée asks Dennis:

[page 45] I presume the Loved One was Caucasian?"
"No, why did you think that? He was purely English."
"English are purely Caucasian, Mr. Barlow. This is a restricted park. The Dreamer has made that rule for the sake of the Waiting Ones. In their time of trial they prefer to be with their own people."

Which brings us to the Dreamer — the man who founded "Whispering Glades". It seems to me that the Dreamer's technique of embroidering euphemisms is one of the main products of his Dream Theme Park filled with full-size replicas buildings from all over the world.

[page 40, 41] This perfect replica of an old English Manor, a notice said, like all the buildings of Whispering Glades, is constructed throughout of Grade A steel and concrete with foundations extending into solid rock. It is certified proof against fire, earthquake and . . . [nuclear fission was being painted in as Dennis read the plaque].

Before Aimée receives her Loved Ones for her day's work, they are always prepared by Mr. Joyboy, who has the hots for her and shows it by adding a smile to the Loved Ones's faces even when the purchasers of his services had specified a more staid expression. Lacking email and working in different buildings at Whispering Glades, this was his way of communicating with his heart throb.

In this next passage, Aimée gets ready for her date with Mr. Joyboy, his courage to ask her out on a date bolstered by his announcement to her that she will be promoted to be the first female embalmer.

[page 111] With a steady hand Aimee fulfilled the prescribed rites of an American girl preparing to meet her lover — dabbed herself under the arms with a preparation designed to seal the sweatglands, gargled another to sweeten the breath, and brushed into her hair some odorous drops from a bottle labelled: "Jungle Venom"- "From the depth of the fever-ridden swamp," the advertisement had stated, "where juju drums throb for the human sacrifice, Jeannette' s latest exclusive creation Jungle Venom comes to you with the remorseless stealth of the hunting cannibal."

Here we note that the title "The Loved One" becomes a synecdoche for most of the characters of this novel. She is Dennis' loved one, she is Mr. Joyboy's loved one, all the employees of Whispering Glades are the loved ones of the Dreamer, and all of their customers turn over their loved ones to the skillful hands of Whispering Glades for disposal, er, interment, cremation, burial, whatever embroidered euphemisms they charge so dearly for.

When Waugh's push comes to shove, even then his penchant for satire plays itself out admirably. When Aimée discovers Dennis's real occupation, and Waugh comments as the narrator, "Her heart was broken perhaps, but it was a small inexpensive organ of local manufacture." The very next day, Mr. Joyboy receives a yes to his proposal to marry Aimée, based on advice given to her by some cigar-smoking hack who writes the"Guru Brahmin" lovelorn column in the local newspaper. The Loved Ones, who had been reaching Aimée with frown messages lately because she had spurned Joyboy, suddenly arrived "for her ministrations now grinned with triumph."

The dénouement is too precious to be revealed except to a reader of the story. Will Aimée find connubial bliss living with Mr. Joyboy and his mother and her parrot? Or will Dennis mount his white horse and ride to her rescue? Don't even attempt to guess . . . read the complete novel and enjoy Waugh's light touch at satire that is so typically British as he applied it to an industry so typically American. Evelyn Waugh was an English treasure in whose glow, for a time, basked the manicured hillsides and Loved Ones of Hollywood.