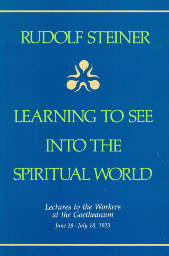 A READER'S JOURNAL
Learning to See Into the Spiritual World, GA#350
by
Rudolf Steiner


This small book, only 81 pages, is jam-packed with concepts and ideas, so let's cut to the chase.(1)

[Page 3, 5] You can only learn how things really are if you know how they are when they are not normal.

Steiner explains that "mental illness" is a very bad term — in German the word is geistesgestört — literally a deranged spirit. He points out that the spirit is healthy in these cases; what happens is that the body is so ill it can not properly use the spirit.

[Page 7] Strange as it seems, one meets independent thinking today only in the few people who have not been to school much.

Steiner points out the pervasive effect of the Latin language on our mode of thinking even today. The process of giving everything a label, placing it into a category made Latin very important in science, law, and medicine for thousands of years. Look at the botanical names, the legal terms, and doctor's prescriptions: all in Latin. If one goes to school for a long time, one becomes a Latin thinker, full of ideas about what is right and what is wrong. Not much room for independent thinking in such a person.

[Page 8] You see, as long as one cannot think for oneself, one can in no way enter the spiritual world.

[Page 11] Concerning his 1893 book, The Philosophy of Spiritual Activity, Steiner says: No one can possibly understand this book who does not think independently. From the beginning, page by page, a reader must become accustomed to using his etheric body if he would think the thoughts in this book at all.

After reading these lectures I came to appreciate the two titles of this book even more. I had preferred The Philosophy of Freedom because so many of the ideas contained within the book resonate with the ideas of Dr. Andrew Joseph Galambos, a pioneer of independent thinking about the concept of freedom. Now I prefer the title, The Philosophy of Spiritual Activity, since I have come to understand that spiritual activity necessarily includes freedom and independent thought in its scope.

Steiner says about this book "it is not the contents . . ., but the most important thing is that independent thinking appeared in the book for the first time." He points out that even though he wrote it in German for a German audience, it might as well been written in Chinese, because he did not use Latin thinking in his German writing, and most of the people of the time had no idea what he was saying. "The etheric body is no Latin scholar," he adds.

[Page 13] Who has used Latin, only Latin, throughout the centuries? More than anyone, the Church. It is precisely the Church that claims to teach humanity about the spirit that has contributed the most to drive out the spirit.

Here Steiner points to a striking paradox inside the orthodox! Latin language prevailed across the world in the Roman Catholic Church until Pope John XXIII replaced the Latin Mass with the vernacular of the people. The Latin language is gone from the Mass, but the Latin thinking is still very much around, and not only in the Catholic Church.

[Page 13] How would the Greeks have described the sacrament of the Eucharist?

Certainly not in the Latin materialistic way: actual body and actual blood. The whole argument about the true nature of transubstantiation was possible only because of its origin and basis in Latin thinking. No etheric, independent thinker would activate a single brain cell on that debate.

My editor, Del, always gives me the etheric thinker's point of view. She said I should include an explanation of how the Greeks might have described the Eucharist. She likes my Notes [explanation of poem] better than my poems, and she also likes my explanations better than the quotes from Steiner. So here goes. I am no expert on the Greek language or Greek thought, but I gathered from Steiner that the Greeks would have taken more of an etheric thinker's view of the changing of bread and wine into the body and blood of Christ. Something like this: "When I consume the sacred bread and wine, my soul experiences uniting with the Sun Spirit of the Christ." The Greeks would have had no need for the argument over whether the bread and wine really changed or not — that argument is physical Latin thinking.

There are street performers in New Orleans' French Quarter who paint themselves silver and hold a pose so still that one takes them for a statue. That is Latin thinking: materialistic, unmoving. Yet there is a paradox in their art: by standing still, not even twitching a single muscle, the performers are less narrowly tied to their physical bodies than the onlookers on the sidewalk who gaze at them in amusement.

[Page 30] Just look at all the things and places people run to in order not to be bored. They always want to be amused; but what does that mean, to want to be amused all the time? It means they really want to run away from the spirit.

Steiner describes an ingenious method of artificially creating boredom. [You thrill-seekers can skip to the next paragraph.] Go to a boring lecture, or merely find yourself inadvertently in one for an hour, then spend the next two hours reviewing in detail everything the lecturer covered. Why do such a thing? Because, Steiner tells us, in the subsequent two hour meditation on the boring lecture, a higher being, a completely spiritual being will emerge behind the lecturer.

[Page 38] One must get used to feeling pain in one's soul when something is not right, and to finding that something that is correct gives one a spiritual joy.

This explains why the feeling of joy arises so strong when one discovers a truth. As a young girl told me once, when I asked if she'd like to become a computer programmer, "When I think about getting paid money for just telling a computer 'yes' or 'no', I get joy feels all over."

[Page 39] You must continually be spitting out what is bad, spiritually, if your spirit is to remain healthy.

I note that this contradicts what Steiner says on page 5: "The spirit is always healthy." Perhaps he was only talking about in a "mentally deranged" person.

When Del read the above statement by Steiner, she said, "Don't put it in your mouth in the first place!" I explained to her that Steiner died by being poisoned, which indicates that he did put something in his mouth that was bad. This casts a different light on the two statements.

Consider that the statement, "The spirit is always healthy" was spoken by Steiner as an etheric thinker, and that the statement on page 39 was spoken by Steiner as a Latin thinker. The latter statement presupposes that you must put something physically into your mouth [Latin thinking] in order to determine if it's bad. It also presupposes that if you don't spit out what's bad, your spirit will become unhealthy. Thus, in these two contradicting statements we get a hint of Steiner's imminent death by poisoning several years later.

These clips from Steiner's lectures may not nourish you, but they will tantalize you with the redolence of the nutritious goodies awaiting you within the covers of this book. Bon Appétit!

Footnote 1. A more detailed review of these lectures can be found in the context of the full set of Steiner Lectures from the GA#350 Volume called From Mammoths to Mediums.