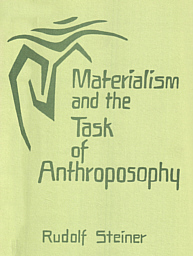 Materialism and the Task of Anthroposophy, GA# 204
by
Rudolf Steiner

In a comic strip the other day, one character asked, "What's playing at the movies?" The other character answered, "Big Catastrophe No. 1, No. 2, No. 3, No. 4, and No. 5." I laughed because it speaks so topically of today's movies. Titanic has just been released along with Firestorm, and these two followed a spate of earlier disaster movies, Tornado, Earthquake, Volcano, and, of course, that perennial favorite, The Eggplant That Ate Chicago. In the Table of Contents of this book, the first sentence of the first lecture sums it up for us:

Materialism was justified in the nineteenth century; clinging to it generates catastrophes.

One can certainly see what Steiner figures the "task of Anthroposophy" is for us on the cusp of the 20th and 21st centuries: to help humans to release their attachment to material things. By materialism, Steiner means much more than a mere attachment to physical objects — he means materialism as a way of being, a world-view, a paradigm that blinds us to other possible ways of viewing the world, up until now.

He refers to Latin-thinking — that living legacy of an already dead language (Latin) — which is a way of thinking inside our native languages [derivatives of Latin] that fashions our thoughts in such a way that we concretize the non-physical, reify the abstract, and manipulate the resulting abstractions as though they were physical objects.

Isn't this a useful way of thinking? This concretizing is useful for law, for science, and, strangely, for religions as many of us in the West know religion. It is useful for measuring, judging, and ruling, but Latin-thinking leads to vacuous disputes in the realm of living processes. One notable example of this is the long arguments debated over the real nature of bread and wine during the sacrament of the Holy Eucharist. Is it really turned into the Body and Blood of Jesus Christ?

The Greeks, originally all etheric-thinkers, found no need to ever ask or answer that question. It only made sense to ask the question in Latin, and thus the Fathers of the Roman Catholic Church, all Latin-thinkers by training, asked the question ad infinitum. Eventually the Church Fathers, in committee laid down a Latin-thinking ruling that satisfied all Catholics on the matter. I say all Catholics because if you didn't accept the Church's rulings you were summarily branded a heretic and tossed out on your ear.

In 1897, one hundred years ago, a small girl named Virginia wrote to the editor of The New York Sun thus:

I am 8 years old. Some of my little friends say there is no Santa Claus. Papa says, "If you see it in The Sun it's so." Please tell me the truth: Is there a Santa Claus?

Virginia, your little friends are wrong. They have been affected by the skepticism of a skeptical age. They do not believe except they see. They think that nothing can be which is not comprehensible by their little minds. . . .

Yes, Virginia, there is a Santa Claus. He exists as certainly as love and generosity and devotion exist, and you know that they abound and give your life its highest beauty and joy.

Santa Claus may be considered the greatest invention of the human mind if he did nothing but return once a year to remind children and adults alike of the dry vacuity of Latin-thinking relative to the life-bringing joy of etheric-thinking.

Materialists, in my experience, are the most skeptical lot of all of humanity. They are skeptical of anything abstract, etherical, or spiritual. Skeptical of everything, that is, except their own unproven, abstract belief in materialism. Such paradoxes are the heritage of every Latin-thinker, and materialists are Latin-thinkers, par excellence.

The Latin-thinking authorities of the early Christian Church established the rules of what one should think, so that anyone with a direct knowing [a gnosis] of spiritual realities was cast out of the Church. All the Gnostic writings were expunged from the religious texts, so that all we know of the Gnostics, those early etheric-thinking Christians, is from certain quotes left behind in the writings of the opponents of Gnosticism. Future generations could hardly travel to the moon if the only records of the moon landing in 1969 were made by skeptics who believed that it never really happened.

There are two ways of perceiving a spiritual reality such as the Mystery of Golgotha, as Steiner puts it. One is to take the insight as coming from the cosmos directly as an instinctive, elemental insight. The other way is to let a majority vote of some legislative body decide on what the meaning of the insight shall be. The latter was the exact approach taken by the Church Councils around the fourth and fifth centuries, A. D.

Latin-thinking modes lead to legalistic decisions by majority vote which lead to restrictions on personal freedom which lead to coercion. Etheric insights lead to etheric thinking, which lead to spiritual activity, which leads to independent activity or what we call freedom.

[page 90] People [of the Orient] wished to comprehend the sensory world on the basis of these spiritual worlds.

[page 91] To us [in the West], the physical-sensory world is given.

[page 93] Such mighty forces and impulses dwell in Christianity that they could, of course, be effective and survive despite the fact that they were poured into the world of the Roman political system.

Some readers may be saying, "What was the harm? Surely this merger of Church and State helped the spread of Christianity." Steiner says, as if to answer that question:

[page 96] that the time had come in human development when the human being who does not ask — who does not develop his inner being and does not seek the impulse of truth on his own but remains passive — cannot arrive at an experience of his own self. . . . The I must first lift itself up in order to recognize itself as something supersensible.

Thus the wonderful paradox of the Roman Catholic Church is that by the very fact of its applying rules and laws to its passive members, it keeps them from the very independence of thought and spiritual activity that would lead them to the spiritual world. Lacking the ability to pull themselves up by their own bootstraps, the members become even more dependent on the external Church for their link to a spiritual world that their Church keeps them from directly experiencing, up until now.

And the new religion of the late 20th century, materialistic science, is just as bad as in our time as the early Roman Church was in its time. Leibnitz once said, "Nothing dwells in the intellect that did not dwell earlier in the senses, except for the intellect itself." Modern materialistic science deftly omits the final phrase. Steiner says that modern science acknowledges only the sentence:

"Nothing dwells in the intellect that did not dwell earlier in the senses," whereas Leibnitz clearly discerned that the intellect is something totally spiritual at work in the human being quite independent of all aspects of the physical corporeality.

There are three streams in the Western world today:

1.) Faith without intellect, but with a connection to rituals. [Catholic]

2.) Faith without intellect and without ritual. [Protestant]

Steiner says that we cannot count on either of these three streams but that they are moving us in the right direction, which is:

[page 169] We can count on the attitude that takes the new intellectuality seriously and deepens it Imaginatively, Inspiratively, and Intuitively, thus arriving at a new spirituality.

[page 171] has to concern itself with waking up, with becoming inwardly active. Its intelligence must not remain lazy, for this intelligence can raise itself; it can lift itself inwardly with an understanding for the new view of the spirit.

In ancient times tribal members felt a blood link to the father of the tribe and felt his blood flowing in their veins. Likewise they felt their bodies to be part of their ancestral father's body. They "sensed a profound mystery in the forces of the body and blood." Steiner continues:

[page 303] People today no longer have any idea of how the divine spiritual was worshiped then at the same time as the material substance. [italics mine]

I couldn't help but wonder if the entire argument over the true nature of transubstantiation would be made unnecessary if during the Holy Eucharist Christ were reported to have said, using etheric-thinking rather than Latin-thinking words:

This is Bread and at the same time this is my Body.

To close this review I will allow Rudolf Steiner to clearly state his point, even more pertinent to us of the late 20th century than it was to his listeners of the early 20th century:

[page 317] But this is the point, my dear friends. We no longer need be misled by the intellect; this insight can help us to progress. Today people follow a shadow, the reasoning or intellect within them. They allow themselves to be misled by it instead of striving for Imagination, Inspiration, and Intuition, which in turn would lead once again into the spiritual world that actually surrounds us.