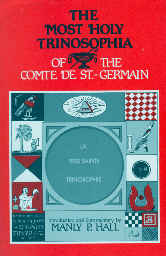 The Most Holy Trinosophia of Comte de St.-Germain
by
Manly P. Hall

Published by The Philosophical Research Society, Inc in 1983
A Book Review by Bobby Matherne ©1987

"Surprise, surprise, surprise!" as Gomer Pyle would say — "St.-Germain ain't a saint." And the mystery goes on . . . Not a saint but a contemporary of 18th Century notables — Caligostra, Marie Antoinette, Louis XV, and many others whose drawing rooms he frequented. Never eating in public, he passed time at public dinners by entertaining diners with intimate stories of notables many years prior to his supposed birth, such as King Francois I. He spoke nearly a dozen languages fluently and was an accomplished musicians, composing and playing pieces on the violin and even conducting an entire symphony orchestra without a score. More remarkable is the lack of documentation of his death and the fact that he appeared to people for many years after his death, often forgetting to knock or use the doors! Recent reports of his being alive in this century are cited.

He is reported to have turned silver coins into gold on many occasions and once turned two-thirds of a unique, one-of-a-kind medallion into gold and left the remaining one-third in silver. At his dinner parties, he placed precious stones worth many thousands of dollars for gifts in the plates of each of his guests. He is reported to have predicted the downfall of the French government prior to the Revolution and the demise of Marie Antoinette.

"The Most Holy Trinosophia" is his only book extant and is presented in both the English and French. The French is a very poor, dark photostatic copy of the original copy and only copy made of the original which the Comte is said to have destroyed. Manly P. Hall maps the twelve sections of the book unto the twelve astrological signs and elaborates on the signs in each section. The twelve sections proceed from the initiatory Aries to the reborn Pisces. Fraught with symbolism, the story has meanings on as many levels as the typical Milton Erickson, MD, hypnotic trance induction.