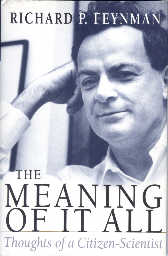 The Meaning of It All

by
Richard Feynman
Thoughts of a Citizen-Scientist

On page 2 of this book I wrote "The names of things evoke angels according to their names." This was inspired by a number of episodes that I had joked about at the time (1970's). When I bought my 1953 MG TD with the deep blue Chinese lacquer paint job in 1972, the first name that popped into our heads was "Blue Baby". She was a beautiful blue baby! Over the ensuing months, the cooling system had numerous problems and needed a six-bladed fan to replace its dinky four-bladed fan to cope with California summer heat. Then it needed a new starter, a new this, a new that — the Blue Baby was beginning to resemble a weak newborn with a heart defect. Due to the aorta receiving blood from both sides of the heart, the newborn appears blue.

After fixing these problems, I decided that I wanted a robust car, so I renamed it TUFF•TD, and even got a Massachusetts personalized license plate with that name on it (evading the bluenose censors with a name that sounded like the vulgar epithet "tough titty"). I had few problems with it thereafter.

Later in the 70's I acquired a flashy silver colored VW Beetle with wide aluminum wheels and tires. We called it the Silver Bullet. Within a couple of months the Silver Bullet went up in a flash of fire and smoke when its motor caught fire and melted in the middle of a movie at the Do Drive-In. We never asked our teenaged daughter who was driving the car that night what might have been going on in the front seat, because with a name like "Do Drive-in" the answer was too obvious. We replaced the spent Silver Bullet with a newer blue Super Beetle which we carefully named the Durabeetle, and this car I drove for almost six years and 300,000 miles.

So what about the name The Meaning of It All? This name was given to this series of three lectures in order to sell them as a book. I found little in the lectures to recommend any title other than the more aptly named subtitle Thoughts of a Citizen-Scientist. My guess is Richard Feynman would have kept the subtitle and scuttled the title.

For Feynman's thoughts are that the meaning of it all can be found in his version of materialistic science, which even he admits cannot have all the answers. His thoughts are clear, concise, and interesting, but the title promises a hearty cup of soup and when we dip into the pot for our portion, we notice that the pot contains only hot water and a large stone. Science is to reality as a large stone in hot water is to minestrone.

In the folk fable of "Stone Soup" the stone was only the beginning of the soup — the soup was the promise. The citizens of the town, not being citizen-scientists, did not bring more stones, but instead brought salt, pepper, herbs, onions, carrots, parsley, cabbage, tomatoes, beef, and mutton to add to the savory broth which soon nourished the whole town.

There were a couple of morsels in Feynman's soup worth sharing with you.

[page 5] [Feynman gives a concise delineation of science and technology.] Science means, sometimes, a special method of finding things out. Sometimes it means the body of knowledge arising from the things found out(1). It may also mean the new things you can do when you have found something out, or the actual doing of new things. This last field is usually called technology.

[page 28] [Feynman proves that doubt is no doubt valuable.] Doubt is clearly a value in the sciences. Whether it is in other fields is an open question and an uncertain matter. I expect in the next lectures to discuss that very point and to try to demonstrate that it is important to doubt and that is not a fearful thing, but a thing of very great value.

In the final lecture, he rambles on about such topics as the probabilities of detecting that a mind reader is a charlatan. Somehow this chapter seems to be an entire article from the Skeptical Inquirer that somehow got substituted for Feynman's real lecture. What is the probability of that, one might ask.

The Meaning of It All delivered, in the end, the meaning of nothing — and having promised such a hearty soup in its main title, to have served up only a big rock in a pot of hot water leaves the reader more hungry for sustenance at the end of the book than at the beginning.


Shortly after I wrote this review in 1998, I discovered a special method of finding out why unusual and unexpected feelings would arise in people. I was working along with Doyle Henderson who had discovered how to remove such unwanted feelings. As I investigated removal of various feeling states, I put together a body of knowledge arising from my discoveries and named it doyletics after Doyle Henderson, and I gave the named doyles to these unwanted bodily states. I began to find out new things one could do with this new discovery, all of which led me to call this new field of endeavor a science. For example, no one had ever considered being able to remove a proprioceptive feeling of flying off the face of the Earth, but I had since childhood such a feeling when I laid down on my back at the beach and opened my eyes. When I closed my eyes, the feeling went away. I knew it was a doyle and quickly removed this unwanted physical body state. Some people objected to my calling my new field a science, but one can clearly see doyletics qualifies to be called a science by Richard Feynman's definition. The technology that comes with doyletics is the Speed Trace which can remove lifelong unpleasant sensations in seconds. The science of doyletics and the applications of its technology can be found here: http://www.doyletics.com