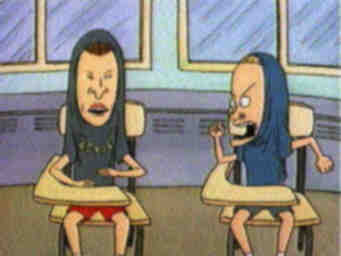 
The Mr. Magoo Duo of the Nineties

In the 1950's a loveable curmudgeon endeared himself to millions of movie-goers as he trotted blithely through the world, leaving chaos behind him wherever he went. Mr. Magoo was blind as a bat, as it was still politically correct to say back then. We would have to call him visually challenged today. In Mr. Magoo's adventures, he always got what he wanted, though usually through lucky twists of visual misunderstanding due to his restricted sight. We laughed because we recognized some of the same foibles in ourselves.

In the 1990's an eminently unlovable duo is trotting across our cartoon screens in search of a score. Blessed with perfect eyesight, Beavis and Butthead nevertheless are conceptually challenged, and, always missing the point of a situation, they walk blithely through the world leaving havoc in their wake, just like Mr. Magoo. They are the Mr. Magoo of our time.

B&B are always looking to score, to do some willing female (by this they mean that they want to have sexual intercourse with her, in case the reader is unfamiliar with these American idioms). And they are always looking at television. The crisis of the movie begins when two thugs steal B&B's television, and Beavis becomes like Peter Sellers in Being There — he tries to use the remote without a TV present, as though it were a universal control of his world.

In their search for a television to watch, Beavis and Butthead do America. Mistaken for two hit men, they are hired to do a thug's wife for $10,000 (in this case do means to murder her, a meaning that is lost on the duo in their monomania to score). Naturally Beavis wants no part of anything that doesn't involve watching television, but Butthead explains that by doing the guy's wife, they can get money to buy a new television, and the game is afoot. They set out to achieve their two goals in life: to watch TV and to score.

As they trot through Las Vegas, Hoover Dam, and the Grand Canyon on their way to the White House and hero-dom, their monomania for scoring and watching television becomes an obvious part of their conceptually challenged behavior. By interpreting all the actions around them through these two filters, they wander Magoo-like through one disaster after another. On a tour of Hoover Dam, all they see is the television monitors in the empty control room, and hoping to watch some TV, open the floodgates and destroy part of the dam. They are like two snakes eating each other's tail — a modern day Ouroboros — "the emblematic serpent of ancient Egypt and Greece that expresses the unity of all things, material and spiritual, which never disappears but perpetually changes from one form to another in an eternal cycle of destruction and creation" (EB).

We laughed at Mr. Magoo's antics because we recognized in the hyperbole of the cartoon, the visual foibles of our own lives. We laugh at Beavis and Butthead because, in their monomaniacal quests for scoring and TV, we recognize our own monomaniacal foibles. That deep, inner recognition collides with our shallow everyday recognition and creates laughter. Laughter derives from two disparate meanings held in different parts of the body which, when fired off simultaneously, require us to undergo that spontaneous assimilation and accommodation that we call laughter, whether it be a suppressed titter or a raucous belly-laugh.

"Why do Beavis and Butthead talk so weird?" Yes, throughout the entire movie, they generate a persistent "hee-hee-hee" or "uh-uh-uh-uh" like a motor boat puttering away. This constant puttering is the external sign of their monomania, in fact, it is a necessary part of the process of sustaining it. Each person with a monomania has a way of sustaining it — to prevent it from ever disappearing. Workaholics do it by focusing always on work. Alcoholics always have a drink in their hands. With the continuous barrage of reinforcing signals the Ouroboros keeps eating his own tail.

Moses's Third Commandment says, in Rudolf Steiner's words, "What lives in you as I created the world in six days and lived inside Himself on the seventh." To live in the world for six days, one must live within oneself on the seventh day. This seems to be necessary to break the hold of the Ouroboros — the loop we do on ourselves. When the world is too much with us, when we grab hold of a monster to consume it, we are as oblivious as Beavis and Butthead that it is our own extremity we are trying to consume. The XYZ's (choose your favorite bad guy 3-letter acronym) do it to themselves everyday. And, like Mr. Magoo of old or the new Mr. Magoo-duo, they create havoc everywhere they go. They are looped in monomania: their Ouroboros nature has taken control. Workaholics are looped. Drug addicts are looped. Coercion addicts are looped. And in his book, The Philosophy of Freedom, Rudolf Steiner shows that the way out of the dark valley of acculturated monomania is individual voluntary action inspired by a deep intuition which can only come in quiet times of contemplation. Can you imagine Beavis and Butthead sitting quietly in church during a worship service? Or, for more of a stretch, imagine Beavis sitting in a lotus position meditating silently and free of thought for fifteen or twenty minutes? The problem with television, video games, and computers stem from the monomania that we bring to our uses of the media.

If they watch network TV shows they see for the most part people who are in similar monomaniacal life situations as themselves. The situation comedy laugh-tracks, when speeded up into a continuous loop becomes Beavis and Butthead's puttering patter. Beavis and Butthead were really doing America in this movie — like we might say Rich Little was doing George Burns — they were portraying the monomania that infects so many Americans and other citizens of the world that import the products of America.

Is there a solution for this pervasive monomania? Meditation is one hope because it provides these two ways out:

2.) Meditation provides a new monomania that contains its own cure.

If you meditate longer and longer, soon you will let go of the need to do things over and over from now on.

Comments on my first Movie Review for ARJ:


Carol Golden: [Re: Beavis and Butthead Movie Review, Date: Sun, 3 Aug 1997] I was wondering where you were going with this.....the Mr. Magoo perception is the first idea that allows B&B to make any acceptable sense. But, I must admit, I had no idea that the point you were going to make would be so short, so sweet, and so alien to the nature of the subject! Good point!

Mary Sahs [Re: Beavis and Butthead Movie Review, Date: Sun, 3 Aug 1997]: Bobby, you wrote, "You'll never guess which movie is my first movie review, not in a million years."
You couldn't be more correct! I never would have even considered watching this movie, myself, so I really appreciate you watching it for me, and then coming up with such enlightened/enlightening ideas about it. I was a big Mr. Magoo fan. So I take it you don't agree with the criticism that B&B glorify stupidity, and make it not-OK among our youth to have half-a-brain? Do kids see them as role models or bad examples? I have never seen that much of them as I don't get that end of the cable and as I said, wouldn't seek out the movie.
Thanks for sharing!