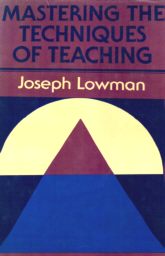 Mastering the Techniques of Teaching
by
Joseph Lowman

Published by Jossey-Bass Publishers, SF in 1984
A Book Review by Bobby Matherne ©1999

This book was an auxiliary textbook for my course in College Teaching, and it provides a solid background for any prospective or current college teacher interested in improving the process of teaching. Lowman looks at college teaching as a dramatic arena as well as a human arena, and in that arena the professor or teacher is a skilled artist. Here's how he sums up his book in the Preface.

[page x] Though considerable relevant research is cited, teaching and learning are not thought of here as cold and technological but warm, exciting, and personal — decidedly human processes in which emotion and magic abound.

He asks on page 3 whether we need better teachers as the students suggest or better students as the faculty suggests, and hints that the assertion from O. P. Kolstoe's book College Professoring that "nobody can't teach nobody nothing" is right on the money. As I like to say, "Thus a Teacher, So Also a Learner!" If there's not teaching and learning going on both sides of the lectern, then what passes for education is paltry indeed.

Lowman's approach to teaching and learning effectiveness can be described in the following simple equation:

Where the Quality Q of Instruction I is considered as the Summation of the two skills of 1) evoking Intellectual Excitement IE and 2) creating Positive Rapport PR in Students.

[page 10] These two kinds of skills are relatively independent, and excellence at either can ensure effective teaching with some students and in certain kinds of classes. A teacher who is accomplished at both is most likely to be outstanding for all students and in any setting.

Such teachers continue to work on a subject until it becomes so simple that they themselves understand it in a deeper way. In Jerome Bruner's book The Process of Education he tells of a college professor who had the experience of doing his lecture over and over until the professor understood it, at which point the blank faces on his students disappeared. [See ARJ: The Process of Education for the exact quote.] The process of teaching is not the simple act of conveying words that describe some subject, but rather it is the complex act of transferring understanding from one person directly to another. That transfer requires that understanding be present first in the transmitter before it can be radiated to a receiver. Knowledge is acquired by receiving understanding not by receiving words from a lecturer at the front of a class.

[page 11] Outstanding teachers share this facility for clear exposition. Ernest Rutherford, the nineteenth-century British physicist, believed that he had not completed a scientific discovery until he was able to translate it into readily understandable language (Highet, 1950).

"Why has the lecture survived?" Lowman asks pointedly about the survival of the live lecture format on page 96 after evoking images of students struggling to stay awake in soporific lectures. Considering only the pedagogical aspects of this, it is my belief that the lecturer's understanding is transmitted directly to the brain of the student when both minds are tuned to the same wavelength — the tuning occurs during listening when both the lecturer and the student are thinking the same thoughts. In any teaching and learning situation using a written or otherwise pre-recorded media, the student must do the job of both the absent professor and the student, i.e., must perform both as the transmitter and the receiver. That is an enormously more difficult job, one whose magnitude of difficulty is glossed over or simply ignored by educational firms selling and promoting such recorded lessons.

[page 101] While many theorists stress the importance of events outside individuals for learning, the position taken here is that human learning is heavily mediated by internal events — thoughts or cognitions.

And it is the thoughts and cognitions in both the teacher and the learners that must become intermeshed in a seamless web of instantaneous rapport for that understanding to be communicated effectively. To me it is obvious that the live lecture is the most powerful tool for accomplishing such a transfer of understanding. Thus, I would heartily agree with Lowman's point on page 110, "A completed set of notes is no substitute for having been in class to make them."

In Lowman's chapter on developing style, he gives many useful techniques for teachers beset by a barrage of questions from their charges. Here's two sample techniques that illustrate the valuable insights that the author provides again and again throughout this book.

[page 56] Q: "But how are we supposed to know which of these names is important?"
A: "That's a good question. I guess some of the people mentioned in the book have had more impact on the field than others and are more important, but I hope everyone appreciates that they are all notable authors (scientist, artists, philosophers, or whatever). I would rather that you decide how they are similar and different and what impact they have had on each other than try to guess how I might decide to rank-order them."

[page 60, Question from a sniper about the racist, sexist, or elitist attitudes of some historical figure. ] A: "That's an interesting point, and it raises an important dilemma for the historian: How can we look at distant events through the eyes of the people of that era, rather than coloring them with contemporary values? We will discuss historical methods again in a few weeks. For now, let me say that I very much sympathize with your concerns and I suggest that all of us try to imagine why this leader did what he did given the way that he and many others of his time viewed the world."

Lowman is a master teacher and is constantly on the watch for ways to improve his own teaching. He exhorts us to examine our own teaching processes as he teaches us about warming up before a class. On page 91 he tells a story about his psychology class that was moved across campus during a semester and required a ten minutes' walk to reach the class. Rather than the usual thirty seconds jaunt to the class, he had ten minutes of walking between class. He noticed that he could begin teaching immediately with the energy and concentration that usually took him ten minutes into the class to reach. He writes, "In effect, I had been warming up at the students' expense in the past."

[page 92] When I mentioned this to one of my students, a drama major, she said that no actor or musical performer would ever fail to prepare emotionally before going on stage, and she wondered where I had gotten the idea that college teachers were exempt from this rule!

In his chapter on classroom discussions, he gives us a simple way of implementing the "believing-doubting game" originated by Peter Elbow [See ARJ: Embracing Contraries ].

[page 126] One popular form of role playing is a "minidebate" between students: Those sitting in one half of the room argue for one position, and the reset assume the opposing view. If a show of hands indicates an equal split on an issue initially, one variation is have each side assemble and argue for the position they do not endorse, against their own beliefs. This is guaranteed to produce a lively exchange and a fresh consideration of the topic by all.

In closing the book, Lowman finishes with this insightful passage in which he refers to the extensive interviews he did with masterful teachers over the years.

[page 227] My interviews convinced me that ultimately every great teacher decided to work at mastering this art for the very personal reason that being a virtuoso in the classroom is so inherently rewarding.