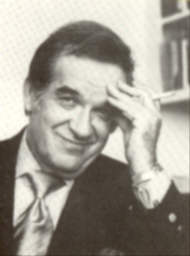 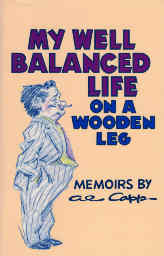 My Well Balanced Life on a Wooden Leg
by Al Capp


I grew up with Li'l Abner — well, that's not exactly true. He started out as a grown-up to the six-year-old me, and all too soon he became a large kid who never grew up and almost never got married. In the late 1940's and early 1950's, B.P. (Before Playboy), Daisy Mae was the closest to pornography on the market and every day there she was in her voluptuous glory: short shorts of frayed blue jeans, years before any decent women, or any women at all, so far as I know, wore them. Topped off by low-cut polka dot blouse loosely tied in a handy knot in the front. Obviously she wore no panties and no bra under all this lascivious accessibility. And how did Li'l Abner respond to her loving attentions? He ignored her almost completely — as long as she was around to keep looking at him and chasing him. And when she chased him, well, his long muscular legs were no match for her barefoot dashing, and he always got away.

One might expect that Li'l Abner told the story of Al Capp's romantic endeavors and one would be dead wrong! Al Capp dearly would have loved to be able to run at any time after he was nine-years-old, but he lost his leg in an accident. He was given fifty cents to get a haircut at the local barber, but discovered that the distant barber college would cut his hair for fifteen cents. Even with the ten cents cost for the trolley ride, he'd be rich with a quarter left over. In those days a quarter could buy what takes a five dollar bill today. Then he found he could hop a ride on the back of a truck and save even the ten cents for the trolley ride. When he jumped off the truck, the trolley was coming behind him, he did see it, and the trolley rode over his leg, severing it at the thigh. In those days, that was a permanent amputation.

He walked around on crutches with his empty pants leg pinned up, and after the celebrity at school wore off, he was treated with pity. Soon he was fitted with a wooden leg that squeaked when he walked. His ability to chase, much less run away from, pretty gals was nipped in the bud. But he was very resourceful and began standing on corners where pretty girls passed and making eyes at them. If one did look back, he would look away. He knew that if he took even one step, the girl's look would change to pity when he dragged his wooden leg and it squeaked aloud.

Once he managed to get into a limousine with a rich girl whose mother was shopping inside the ritzy department store because a group of wild teenagers ran their automobile into an old lady and killed her, thus giving him the distraction necessary to move to the car at exactly the right time. He got her address and managed to leave without her noticing his leg. Later he called on her. Seems like taking a girl out meant having a car and a lot of money, but a porch on a cold evening cost nothing and was perfect for making out. Being very poor, he maneuvered her onto the porch, all 300 pounds of her, as it turned out — a fact that had escaped his notice in the limo earlier. His strategy to avoid kissing her was to attempt the kiss too soon, be turned down, and not try again. It worked. Somehow he managed to leave unscathed, un-kissed, and with his self-esteem intact, only to have his leg squeak one last time and fall out of his pants on the way to the street. He fell with a crash into the driveway, short of the street. The living room lights came back on, and he dragged himself to the street where a kind soul, thinking he'd been in an accident, picked him up and drove him home. He got fitted for a new leg, and he had to replace the sock and the shoe on the lost leg with a new pair of socks and shoes.

Some time during his late teens he got to make a trip he had dreamed of and planned as a child, a trip into the deep south. He and his buddy made the trip together and Al got to catch his only glimpses of hillbilly living, but it was enough to spur his later creation of the mythical town of Dogpatch, USA. While he was drawing Joe Palooka as an assistant, he created his first comic hillbilly characters that were later to mature into those of the Li'l Abner strip.

Not exactly an autobiography, this book is a collection of memoirs and sketches, including Al Capp's life drawn by Li'l Abner in an Escherian move by Capp that few comic artists have ever matched. The comic creation draws a comic strip of the comic strip creator's life. The various sketches are hilarious, witty, poignant, and always interesting. This was an interesting man that graced our daily newspapers for forty-three years.

An example from one of the sketches: Al Capp confessed to being a lifelong non-alcoholic and told the tales of woe of children that grew up with such a non-addicted Dad as he.

[page 108] Children of normal — or drinking — parents learn quickly to stay out of Dad's sight when he comes home from the office at five-thirty, tired and irritable. They know that not until seven, after he has put away two or three, is it safe to emerge. Then the old man will be at his mellow, manageable best, and putty in their hands.

The non-alcoholic's children listen to such accounts of normal home life with bewilderment and envy. It is then that they realize their Dad is no more fun at seven o'clock than he is at five-thirty. In fact, he is never any fun, not in the ripe, glassy-eyed way drinking dads are.

Well, in a world of non-alcoholic Dads, that all too many of us had to endure, thank God there was Li'l Abner and Daisy Mae to brighten our day.