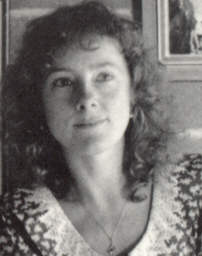 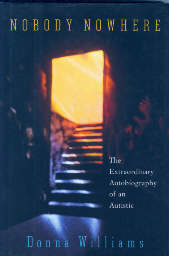 Nobody Nowhere
by
Donna Williams

Fear came and took me away. I stopping being there.

This happened so many times in Donna Williams' life that she chose the way she felt for the title of her book, Nobody Nowhere. Actually she was somebody; several somebodies: she was Willie, the violator, modeled after her mother; she was Carol, who lived in a world Donna wished to live in; and least of all, she was Donna, a very frightened, autistic two-year-old girl who barely got a chance to come out.

Except for the subtitle, I'd have not guessed that Donna was autistic, because the focus of so much of the book was on her multiple personalities. She had suffered enough abuse from her mother as a child to justify a MPD diagnosis. She was always moving from one personality to another as the situation warranted. Willie was the teacher. Carol, the social one. Mary, the psychiatrist. Each personality was designed after someone she mimicked at first and then used his or her personality when she needed help in coping with some difficult incident.

Donna had a whole range of problems growing up: she liked to read, but mostly street directories because of the ordered repetitiveness. She had to keep her eyes open when she slept, which naturally caused folks to think she was weird. She ran away from home constantly, sometimes just for the night, sleeping over at a friend's house, or in an abandoned building if her friend's mother kicked her out.

She had severe cognitive problems. On page 120 she describes a typical problem:

The biology teacher suggested that I use the calculator. I didn't know how. He tried to show me how it worked. When he asked me to work out a percentage of something, I tried to find the of button and gave up, furious and frustrated.

In talking about her living with David, a boy friend who moved in with her and wouldn't move out, she says, in a revealingly ambiguous statement on page 155 (italics mine):

I had wasted a year and half of my life with this beast.

The following quote from page 180 describes her recurring dream. It seems to describe the process of her birth, from the breaking of her mother's water to her passage through the birth canal (not breathing and a crushing feeling):

I was walking alone through a void, surrounded by hills. Suddenly I heard a roaring sound, and huge ocean waves came gushing fearsomely over the hills from all directions, covering me instantly without warning. I held on desperately to a pole in the middle of the barren land where I had been standing. I closed my eyes tight. I could not breathe. I could not scream. I felt the crushing feeling, and the immensity of the ocean gushed back over the hills as instantly as it had come. I clung terrified to the pole, too afraid to move. I think that's how my real self experienced emotion for most of my life.

From the material in the book, I got the impression that Donna had no other emotions, that these feelings, probably experienced by her during her birth, were the sum total of her feeling ecology. As doyletics predicts, autistics have precocious onset of cognitive memories.[See ARJ: Thinking in Pictures and Emergence: Labeled Autistic.] If Donna's cognitive memory started right after birth, she would have stored no further physical body states and would have been left with these fearsome feelings as her only emotions. Whenever Donna ignored the messages from her rational mind that "affection and kindness will not kill" her, she went almost into a state of shock as she began experiencing the physical body states of her birth trauma once again.

This book is an excellent road guide to autism from someone who has driven the road. She's been there — done that — and has written up her experiences in detail. She ends the book with a legend for the road guide, a compendium of her behaviors, the ones that are usually associated with autism, and she explains what each behavior meant for her. "An Outline of Language in 'My World'" is name of this last chapter, and it is an indispensable guide for helping others to understand the otherwise incomprehensible behavior of autistic children and adults.