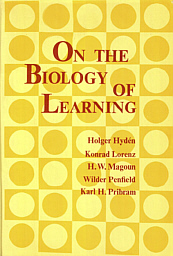 On The Biology of Learning

This book is a compilation of essays by pioneers in their respective fields: Konrad Lorenz, Wilder Penfield, and Karl Pribram, the ones I am most familiar with. I read the book quickly through after the Introduction and first chapter, so this will not be a comprehensive book review, as much as some thoughts inspired by the first few chapters. A comment by Pribram in his Introduction is worth noting in full:

In addition, each does something strict behaviorists usually feel constrained not to do (because they think it "unscientific"): each of the contributors continues to reflect on the riddles that gave rise to his research.

On page 6 Pribram, in talking about Penfield's work on necessity of attention for learning, says:

The evidence for it is not at all conclusive, however. Much of the process of operant conditioning may well occur in the absence of awareness on the part of the organism conditioned.

This confirms what I have believed for some time that learning occurs both consciously and unconsciously, but that which is learned unconsciously takes longer for the learner to understand that the learning is present. So, sleeping in school and college will lead to learning, but not necessarily in time for the final exam. In pointing out that "novelty must be recognized for what it is: that is, information", he leads up to the old saying, "education is what remains after all that was learned has been forgotten." Note that statement brings unconscious learning into a par with conscious learning, so far as education goes.

About Magoun, who presents a three-stage description of the development of learning, Pribram says, "he calls attention to a newly won research opportunity: study the maturation of neural structure and function concomitant with behavioral development, and you will achieve new insights into learning." It is exactly this study that is necessary for further development of Doyle Henderson's theory of emotions. Doyle has focused to date on the functions of the neural mechanisms of the brain, and now it is timely to begin to study the structures that provide the functions in the manner that his theory requires or suggests. An example of research work in this area would be to study the switch from amygdala/limbic memory to neocortex memory at the memory transition age.

Konrad Lorenz makes a cogent point in his essay:

In describing evolution, we are forever hampered by the fact that our vocabulary was created by a culture not yet aware of phylogeny . All the existing terms . . . fail miserably to do justice to what is the essence of evolution, the coming-into-existence of something entirely new, which simply did not exist before.

This leads me to note that mutation is the ontogeny of phylogeny, that is, the development up through all the species, taken as one whole, proceeds by mutations that survive from generation to generation, to improve on a species to such an extent that a new species comes into being, and the phylogeny thereby continues its ontogenesis.