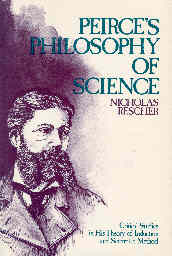 Charles Sanders Peirce (1834-1915) was a mathematician and logician who wrote extensively on the philosophy of science. Walker Percy quotes him in "A Message in the Bottle" and refers to his "triadic" theory of meaning. The thing, the word, and the meaning must be connected together at the same time. In his book on Peirce's philosophy of science, Nicholas Rescher focuses on Peirce's processes of abduction and retroduction. These two processes comprise what Peirce calls qualitative induction:

Abduction  to select likely hypotheses
Retroduction  by the testing of the hypotheses, to eliminate those that do not work.

Rescher devotes some attention to the plausibility of such a process producing useful theories within an attainable period of time. He applies to Darwinian evolution a similar argument used by the vitalists (Bergson et al) to show that the eye, for example, could not have evolved through trial and error. The selection of hypotheses must, therefore, become less and less random as the process of selection evolves over time or else no useful theory would ever evolve. (Note: if the process of selection becomes less random over time, this points to a fatal flaw in Darwinian evolution. See Don Cruse and Robert Zimmer's Evolution and the New Gnosis.)

This next passage highlights the value Peirce placed on quantitative induction, statistical and experimental evidence:

[page 11, 12] The justification for believing that an experiential theory which has been subjected to a number of experimental tests will be in the future sustained about as well by further such test as it has hitherto been, is that by steadily pursuing that method we must in the long run find out how the matter really stands. The reason that we must do so is that our theory, if it be admissible even as a theory, simply consists in supposing that such experiments will in the long run have results of a certain character.

The latter chapters of this book are devoted to a discussion of the economics of hypothesis testing based on Popper's works.

This is a useful introduction to Peirce whose name I have encountered on numerous occasions. Rescher gives only scant mention of Thomas Kuhn's work, not even a bibliographical reference to The Structure of Scientific Revolutions published some 15 years before this book. It seemed to me that Rescher was unfamiliar with Kuhn's contribution to the understanding of the evolution of scientific theories  positing that progress came in large leaps (revolutions) not small incremental steps (evolutions). No amount of self-correction can ever lead one from Newton to Einstein. It seemed clear to me from his citations of Peirce's works that he had not the benefits of Kuhn's insights and contrary to C. S. Peirce's theories, no extension of Peirce's work could have created Kuhn's.