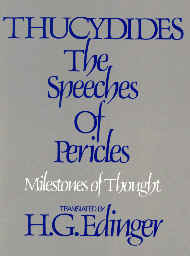 While I was taking a course in Ancient Greek history, this book popped off my unread shelf and insinuated itself into my reading list. I had heard the professor talk about Pericles's funeral speech and its importance for our historical understanding of Athens as well as its importance to the people of Athens at the time. This was too much for me to overlook and I quickly read the three speeches contained within. Edinger translated Thucydides's work, plus he wrote an Introduction to this book, added Notes, and made his own Comments on each of the Speeches of Pericles. So the order of each sub-division of this book is as follows: First Speech of Pericles as written by Thucydides in translation, Notes by Edinger, Comments by Edinger. Each speech follows this order except the first, about which Thucydides made a Summary, which Edinger translated and gave Notes and Comments on. The nesting of speakers and commentators is enough to make one dizzy. One needs a program to know who's talking at each point in the book, however, the speeches are worth the effort.

One cannot read the funeral oration of Pericles without having a sense of deja vu even if one had never read or heard of the speeches before. Here's a passage that affected me that way. It is the very opening words of his funeral speech. Read it and see if you have a similar sense:

[page 32] "Many of those who have spoken here in the past have praised the custom of delivering this eulogy. They have felt it was right to make such a speech honoring the soldiers who have fallen in war. As for me, our performance of this burial suffices to show respect for the glories of these men, who have shown their bravery by their performance in battle. You have just seen the deep respect demonstrated in this burial solemnized by the state. Our belief in the valor of these men should not depend on whether one man's oratory is good or bad. The burial ceremony itself is preferable to the risk of putting the acts of bravery of numerous men into the custody of a single orator who might speak well or badly."

Now read what a modern day Pericles wrote about soldiers who had fallen in war a short 140 years ago:

"We have come to dedicate a portion of that field as a final resting-place for those who here gave their lives that that nation might live. It is altogether fitting and proper that we should do this. But in a larger sense, we cannot dedicate, we cannot consecrate, we cannot hallow this ground. The brave men, living and dead who struggled here have consecrated it far above our poor power to add or detract."

In this excerpt from his famous Gettysburg Address, Abraham Lincoln gets a similar point across with a brevity and conciseness that would make Pericles a bit envious today, until he realized that Abe Lincoln was probably a good reader of his funeral speech and had used it as a model for what he wanted to say on the Civil War battlefield of Gettysburg, Pennsylvania. In art, the first cubist works of Picasso seemed rough hewn compared to his and others' later efforts which were based on the model that Picasso laid down in his original artwork.

Another aspect of Pericles's speeches resonates with some current events in the Fall of 2002 which can perhaps be psyched out in this passage from "The First Speech" in which Pericles exhorts the Athenians to not kowtow to Sparta's demands to revoke the Megarian Decree and instead to prepare themselves for war with Sparta. This passage is from the very beginning of the speech:

[page 12] "My views are the same as ever: we must not make any concession to the Spartans, although I know that the enthusiasm of people when they enter upon a war is not retained when it comes to action, and that their mood is altered by the course of events.

"But I see that today I must give you the same or almost the same advice, as I have given you in the past. Those who are persuaded by my arguments must faithfully support the decision that we reach together, even if every single event does not turn out in our favor, as is likely to happen. Either support the decision now or you will not be able to claim any credit, after we win the war, for having acted wisely. Everyone knows, of course, that events in war do not turn out any more predictably than any other plans that people make."

The United States differs in an important way from its enemies today. It is a country that is open to all the peoples of the world. Except for known criminals we do not prevent foreigners from visiting here and seeing the sights in any part of the country. In this next passage we can discern our similarity to the openness of Athens to foreigners.

[page 34] "The way we live differs in another respect from that of our enemies. Our city is open to all the world. We have never had aliens' laws* to exclude anyone from finding out or seeing anything here, nor any secretes of the city that an enemy might find out about and use to his advantage. For our security we reply not on defensive arrangements or secrecy but on the courage that springs from our souls, when we are called to action. [*Note 11: Sparta restricted associations between citizens and foreigners and, in general, did not tolerate outsiders.]

Under the dictator Saddam Hussein, Iraq will go to war without debate as soon as Hussein decrees it as he did in 1991 when Iraq invaded Kuwait. If there was a debate about the Kuwait invasion in Iraq, no one outside of the debate knew of it till Iraqi troops had overrun Kuwait. In the United States, the president may decide that it's time to go to war against Iraq, but the Congress will debate the issue in earnest before any decree is signed. That debate has taken place in public for the entire world to see and hear. Again another distinction that aligns Iraq with Sparta and the USA with Athens.

[page 50] Indeed, the practice of debate before going into action leads to greater resoluteness in Athens than in other cities, which is a characteristically paradoxical (and perhaps Periclean) reversal of what most Greeks would have regarded as the true relation between debate and action.

The last two passages of the funeral speech are memorable. The first in its own right, as anyone over the age of sixty may attest. The second is poignant now, just days after Senator Paul Wellstone died in a plane crash. He was a fiery liberal senator who received the support of few in the majority for his policies, but upon his death, he received the praise of everyone.

[page 40] "Love of honor is the only feeling that does not grow old. And the last pleasure when one is weak with age is not, as some say, making money, but having the respect of our fellow men."

[page 40] "Everyone will naturally praise those who are no more. And even if you were to attain surpassing heroism, it will be a hard thing for you to be judged their equal or even having come near their virtue. For there is jealousy of the living because of rivalry. But once a man is no longer in one's way, the honors he receives are sincere and no longer curtailed by jealousy."

In his "Comments on the Funeral Speech," Edinger points out how Pericles addressed his funeral oration first to the soldiers who had died in battle, then to the surviving citizens in this order: the living parents, those young enough to have more children, those too old to have more children, the children and brothers of the fallen, and finally to the surviving wives of the fallen soldiers.

[page 53] Pericles promises the widows that the children of the fallen soldiers will be supported at public expense. He calls this arrangement a victory crown. The children, as wards of the state, will be guaranteed the education that will make them into representatives of the Athens for which their fathers died, and for which they too will come to know how to die instinctively.

Pericles's third speech came after the second invasion by the Spartans, and it was up to him to rally the citizens of Athens into battle. His words resonate with the words of President Bush and those orators in Congress in 2002 urging action against Iraq.

[page 56] "If one can live undisturbed, and has the choice between war and peace, it is utter folly to go to war. But if one is forced to choose between submission and immediate slavery, and taking the risk of war to preserve his independence, then the man who avoids risk is to blame, not the one who puts up resistance.

A plague was devastating Athens at the time of the second invasion and Pericles referred to this plague as an act of the gods in this final passage from the speeches of Pericles.

[page 59] "Men must endure with resignation what the gods send, but with fortitude, the hardships that come from the enemy."

America is enduring hardships currently from an enemy in the form of terrorist attacks. The situation is similar to when the Barbary pirates attacked our ships. Their defeat required us to launch an invasion by our Marines on the foreign shores of Tripoli where the pirates had sought refuge. Now terrorists are seeking refuge in Iraq and we are faced with a similar situation. Shall we let them alone so that they may attack our citizens once more or shall we ferret them out and remove the dictator offering them support and succor? We would do well to heed the words of Pericles reaching us over the centuries stiffen our resolve to endure these hardships with fortitude --- and rather than attempt to avoid risks, take actions to preserve Americans lives. The choice before us is one that the citizens of Athens faced 2500 years ago and Pericles' words ring true yet today.