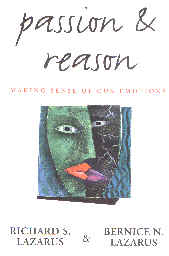 This book is an encyclopedia of emotions, a comprehensive analysis of the major emotions and the known methods for understanding and handling of emotions, both on an individual basis and in a clinical setting. I acquired this book for my library as I was beginning my work with Doyle P. Henderson on his novel theory of emotions.

Nothing in this book could lead one to Doyle's theory, but this book is filled with data on the paltry level which our knowledge of emotions and their control has reached, up until now. The authors say in their Final Thoughts chapter that:

To a great extent biology shapes the emotional reaction to the personal meaning we construe from a situation.

This statement shows that nothing changed much in thoughts since the beginning of the book, where on page 9 they state:

Finally, if we understand the personal meanings that underlie our own emotions, we will be in a better position to accept these emotions in ourselves, control them so that they do not interfere with our relationships with those we care about, and be more skillful in managing our lives. Facilitating this understanding is the basic goal of this book.

In many places in the text the authors try to draw us into a universal theory of emotions, i. e., that human beings develop emotions the same way they develop arms, kidneys, and eyes: from a generalized biological urge in their genes. If we accept such a universal theory, we would expect that person A's anger would be similar to person B's anger just like their kidneys are similar.

Yet, on page 15 in the first detailed case study, the authors state clearly, "Another person with a different personal and marital history might not have made the same appraisal . . ." Instead of helping the person to recover the pieces of individual personal history that would him to convert an involuntary response from his past into a conceptualized memory, the authors suggest that if he created a competing goal "preserving the relationship", then the anger would not have occurred or would have been milder. This approach clearly shows the authors' colors as cognitive therapists, who "consider distressing and dysfunctional emotions the result of the personal meaning constructed about negative events."

Thus we see that distressing emotions come from the automatic re-triggering of primitive body states, after which we may construct personal meanings, not before, as cognitive therapists would have us believe. Contrary to the statement on page 199 — "the purpose of this chapter is to suggest that there is no emotion without thought or reason . . ." — we find, via Henderson's theory, that emotions begin one has an as yet undeveloped conceptual apparatus, one that is incapable of either thought or reason.

In its attempt to indoctrinate its readers into the field of cognitive therapy, the book goes astray from its main goal of being a compendium of the emotions. This goal it achieves quite well, which makes the book a valuable map of the field of emotional control (except for the salient omission of Henderson's theory).

The chapter Emotions and Health is very useful in understanding the effects of negative and positive emotions on health.

[page 242] Some of the hormones secreted in the presence of stress emotions impair or weaken the immune process by reducing the available number of disease-fighting components, such as lymphocytes (white cells), thereby leaving us more vulnerable to infection.

Through this chapter I was able to understand how the onset of a common illness like a cold or the flu can generate or trigger stored primitive body states (negative emotions or stress) that would depress the immune system exactly at the time the immune system should be kicking into high gear to create white blood cells to fight off the illness. It would be like starting up a sharp incline in your car, and just when more gas is need by the engine, the carburetor would give it less. One would not be surprised that the car slowed to a complete stop under such conditions. And that is what can happen to a human when, in the presence of stress reactions, the immune system is depressed at the onset of an illness.

When the next definitive exposition of Making Sense of Our Emotions is written in the 21st century, one can expect it will devote much of its space to doyletics — the new science of emotions based on Doyle Henderson's theory — and that cognitive therapy will be a footnote to history along with leeches, phlogiston, and whale oil lamps.