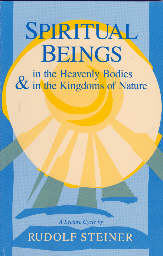 Spiritual Beings in the Heavenly Bodies
and in the Kingdoms of Nature, GA# 158
by
Rudolf Steiner

As I was entering J. Peter Vajk's book into my library database, Doomsday Has Been Canceled, I encountered this quote:

[page 46] Every living thing is a structure which acts to increase order within its boundaries.

This certainly applies to the spiritual beings according to Steiner. In fact, the evolution of consciousness is another way of saying, "acting to increase order". In this series of lectures, Steiner covers the three kingdoms, the human being as the pivot point and the three hierarchies of the spiritual beings. To display these kingdoms and hierarchies I modified my Table of Evolution [see Spiritual Hierarchies, ARJ] to create the Spiritual Hierarchies Table below. This is the table I wished I'd had to refer to as I read this book. In these lectures, Steiner used almost exclusively the Spirits name of the Angels and the higher hierarchies, referring to Angels as Spirits of Twilight, Archangels as Spirits of Fire, Archai as Spirits of Personality, etc. This table will be handy to refer to when reading this book if you think more in terms of Angels, Archangels, Archai, etc. The ninefold Celestial Hierarchies in this table match the sculpture of them on the South Porch of Chartres Cathedral.

Why are these lectures important? René Querido, in his Introduction, says:

[page 18] A final point: When Rudolf Steiner was asked how one could counter the one-sided mechanistic view of the universe so prevalent today, he indicated that an active understanding of the working of the heavenly hierarchies in the kingdoms of nature, in the human being, and in the universe could act as a powerful corrective force. (G.A. 193, Berlin, 12 September 1919)

What is spiritual science? Is it just another new age wishy-washy, namby-pamby heap of esoteric mumbo-jumbo for coffee house chit-chat? Can we acquire spiritual understanding by simply repeating continually that we wish to fill our soul with feelings of love? Here's an example of the thought for the day by Louise Hay for June 10, 1998, "With my thoughts and words, I create room in my body, mind, and spirit for love and joy to flow in a free and open way." Certainly it will not hurt anyone to repeat such phrases, but does that repetition of someone else's phrases constitute self education of our souls?

[page 21] Spiritual science does not merely signify the acquisition of knowledge; it signifies most preeminently an education, a self education of our souls. We make ourselves different; we have other interests. When one imbues oneself with spiritual science, the habits of attention for this or that subject which one developed during previous years, alter. What was once of interest is of interest no longer; what was of no interest previously, now begins to be interesting in the highest degree.

r We may say, and I personally testify, that the study of spiritual science affects a transformation in our souls. It is similar to a blind person receiving sight for the first time as an adult: the world is a dazzling array of confusing patterns at first, patterns such as the Spiritual Hierarchies Table , but gradually as one struggles to understand, the confusion falls away and the grand cosmic sense of the world dawns on one's mind. One can close one's eyes and experience the world in one's formerly sightless condition, but with practice one learns to enjoy the new displays of the multi-faceted world of the seeing.

Hold before you an image of the totally deaf person who attends a ballet. The movement of the dancers communicates the harmony of an underlying music that the person cannot hear. Such is the world of the materialist: to wander in a world in which a ballet is everywhere in progress, not to hear the underlying music, only to experience the sensory effects of this spiritual harmony in the physical world. "Where is the instrument to allow me to experience this ethereal music?" the materialist asks. "The instrument is the most refined instrument of all of humankind's crafting; it is your own human body, soul, and spirit." comes the answer. Just as the ballet is physical movement permeated by super-sensory music [to the deaf], so also the physical world that meets us is permeated by the spiritual world. If the materialist would ask the deaf to accept the existence of music in harmony with the ballet movements, so too the materialist should be open to accept the existence of a spiritual world in harmony with the physical movements of his materialistic world.

These relationships are shown in the Spiritual Hierarchies Table in the first four blocks under column 4. Of the nature spirits, Steiner says:

These beings of the 3rd Hierarchy and their offspring nature spirits are shown by the red color in the Table in columns 1, 2, 3, and 4.The nature spirits of fire, those that Steiner says he has yet to become acquainted with, as indicated by the question mark. The group souls of the mineral, plant, and animal kingdoms are offspring of the 2nd Hierarchy as shown by the green colored items in columns 5, 6, an 7. The details of the hierarchies and their offspring we can only hint at in this review. We hope that the Table will be a reminder and reference for those of you that have already read the book and a useful guide for you upon re-reading or first reading the book.

In Lecture Six, Steiner approaches the problem of the fall, when certain beings had a desire to be independent of the higher hierarchies. They basically kept for themselves what was designed to be a loan, and like a servant who had everything provided for them that they required, they were set on their own resources upon discovery of this theft. These came to be called the luciferic beings, the light-bearers, as light was the essence of the loan that they kept for themselves.

[page 103] Those (luciferic) spiritual beings of the third hierarchy of whom we have just spoken did not wish to be filled with the spirit nor to be connected with the spiritual substance of the hierarchies. They wanted an independent spiritual life. There they cut themselves off, they detached themselves, so that the being of the higher hierarchies was above them. They cut the connection and detached themselves as independent beings, retaining the actual light in their inner being. Thus, as it were, they stole what should only have filled them, and then returned to the higher hierarchies. They stole it for themselves, filled their own inner being with it, and thereby developed an independent side of their nature.

Look how the temptation in Eden mirrored the above process. Adam and Eve were tempted to take for themselves what was not theirs and thus cut themselves off from their intimate connection with the spirit in exchange for an independent existence. Luciferic influences show up every day when someone tells you, "You don't have to follow the rules, just take what you want." It is this luciferian desire for independence that is the root of all evil, where the transgressor throws away an inborn spiritual infusion of light, in exchange for independence.

When mankind had sunk so far into the physical material world that the connection with this spiritual light could have been lost forever, we were redeemed, rescued from our folly, our excursion into independence, by Christ who on Golgotha poured His life's blood, His spiritual Light into the planet that each of us are intimately connected to. What we lost by our sally into independence, our connection with the spiritual light, Christ restored to us in an ultimate act of sacrifice: descending through the hierarchies until he reached the I of the human kingdom in His Baptism; descending further till he reached the nature of an animal, a beast of burden during the Way of the Cross; descending further to the nature of a plant as He hung attached to the Cross planted in the Earth; till he finally reached the nature of a mineral as His body was returned to the Earth in the tomb.

In Steiner's lecture on national epics he says of the anger of Achilles in the Iliad:

[page 262] It becomes abundantly clear to us that the people gifted with clairvoyant powers in ancient times did not exercise self-control with their intellect; instead, they acted directly out of their most intense elemental impulses.

It was this lack of self-control that caused the early Greek performances of their plays to get out-of-control and necessitated the creation of the Greek Chorus to calm the audiences down. The chorus did its job by reminding the audience that they were only watching a play, by pulling their attention away from their passionate feelings back into thoughts about the play, by re-directing their attention into the lives of the characters in the play. It is curious that in these waning days of the second millennium, that whenever the passions of the people in the USA are aroused by some personal or public acts, that a Senate or House Investigating Committee is formed to call witnesses before them for interrogation to bring to light the facts that lie behind the innuendo and accusations that would otherwise further inflame the passions of the people. This modern version of a Greek Chorus operates with voices in serial, not parallel, fashion, but its goal is to calm the passions of the people by exposing the motives, the actions, the transactions to the consciousness of the public.

To close this review, let us listen once more to the story of the deaf person attending the ballet, as this sums up so well the experience of so many of us as we begin our trek into this strangely invisible world of the spiritual beings in the heavenly bodies and in the kingdoms of nature:

The spiritual world to the materialist

The deaf at a ballet can notice a

~~~ world of harmony in the motion of the dance

That bespeaks a super-sensible

~~~ world of music in synchronism with the dance.

To Obtain your own Copy of this Reviewed Book, Click on SteinerBooks Logo below.