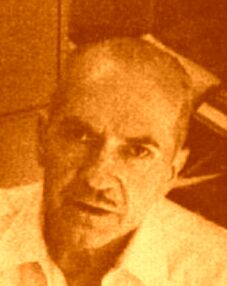 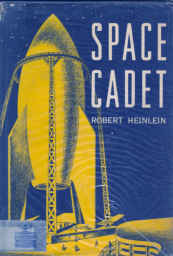 When I was about ten years old, back in 1950, I read this identical book which I borrowed from the Westwego Library. By identical I refer to the type of book as described on the inside book jacket:

Even though no mention is made of using acid-free paper, the paper has not yellowed in 56 years and the binding is solidly intact. So, when I came upon this book for sale by the St. Louis Cathedral School for 25 cents, I gladly gave the young nun in the white habit a quarter and decided to re-read this book after a brief respite of fifty-something years. I wanted to see how Heinlein dealt with space travel two decades before we went to the Moon  what kind of technology would he describe as existing in the year 2075 A. D. that the novel is set in.

He talked of escalators, moving sidewalks, and cell phones. Matt Dodson, the hero, was walking with a buddy early in the story, when he hears,

And later we can deduce he predicted water beds in this next passage, calling them "hydraulic beds".

[page 20] The room was adequate but austere. Matt slept in a hydraulic bed at home, but he had used mattress beds in summer camp.

His prediction about the new shape of Denver in 2075, well, the jury is still out on that one. Matt is stared out at the surface of Earth about a hundred miles away.

[page 38] "That's the Base, just below," the pilot was saying. "Look sharp and you make out Hayworth Hall, maybe, by its shadow."
It did not seem "just below" to Matt; it seemed "out"  or no direction at all. It was disquieting. "Over there - see? - is the crater where Denver used to be. Now look south  that brown stretch is Texas; you can see the Gulf beyond it."

Another "prediction" by Heinlein came when the cadets take their oaths, however, the way they took them was disquieting to me  could be exactly the way we're going to be in another 71 years:

[page 49] "This I solemnly affirm in the Name I hold most sacred."

By God, they may take God's name off the nickels, too, by then. Or remove the Ten Commandments from the courthouses and make functional atheists of all citizens. Certainly no one will thank the Name they hold most sacred for that bit of pettifoggery.

One other invention Heinlein predicted, but one has to look carefully and understand that very small waves correspond to very high frequencies. We had the choice to call them microwave ovens or high-frequency ovens. We chose the former and Heinlein guessed the latter. Still  great guess  probably made before the epochal event of the Hershey's Chocolate Bar melting in the engineer's pocket as he walked past the high-frequency antennae.

[page 145] Theoretically every ration taken aboard a Patrol vessel is pre-cooked and ready for eating as soon as it is taken out of freeze and subjected to the number of seconds, plainly marked on the package, of high-frequency heating required.

One place he missed big time was the prevalence of tiny computers all over the place. Back on Earth was a large computer which did celestial navigation calculations, but there were no hints of any computers on board the space craft Matt and his Patrol buddies piloted and navigated. Even the programmed instruction was done by 1948 technology  spools of film to be viewed and studied, just as my third grade teacher used in 1949. But, even worse than that, no computers to track incoming asteroids that could bust an aster-hole in their tiny space jeep as they cruised the asteroid belt. Human eyes and brains were still being pressed into service to do a simple task that computers already do everyday for air traffic controllers and jet pilots.

[page 153] Matt took along a supply of study spools on his first week of search intending to play them on the jeep's tiny, earphones-type viewer. He did not get much chance; four hours out of eight he had to keep his eyes glued to the search scopes. During the four hours off watch he had to sleep, eat, attend to chores, and study, if possible.

When we learn that Matt's buddy, Oscar, is from Venus, we know that the myth of the 1940s that Venus had a greenhouse atmosphere was at work on Heinlein. All the scientists thought that the clouds covering Venus were water vapor and that the surface temperature of Venus was 68 degrees F or 20 C. A nice shirt sleeve environment where guys like Oscar could grow up. Well, all the scientists except one thought Venus was a greenhouse  Immanuel Velikovsky. He said Venus had a surface temperature of 800 F (paper burns at 451 F), and the clouds were hydrocarbons and unsuitable for breathing. Therefore, definitely no greenhouse, but an uninhabited and uninhabitable planet! Naturally, the establishment scientists of the time scoffed at Velikovsky, told him how wrong he was, kept the book publisher MacMillan from publishing his book, and made a scientific pariah of him. Later, when Venusian probes proved Velikovsky was right  did they offer an apology? Are you serious? No way. What they did do was rather interesting, though. They said, in effect, we were right about Venus being a greenhouse  we just got the date wrong  it was a greenhouse a looonnnng time ago, you see, and that caused a concentration of carbon dioxide to build up, and the temperature of the whole planet to rise until it got be 800 F. Now this was silly enough, but these reputable scientists weren't finished with us yet. They also warned that if we don't stop emitting carbon dioxide and other related chemicals (fluorocarbons, etc) into the air, then we will have the same greenhouse effect on Earth and we will eventually all burn up, too! They even created several phrases to scare people with and trick them into giving them tax money to do their research with  "greenhouse gases" and "global warming". All this because they didn't wish to admit that they were wrong and Velikovsky's predictions were right  not only of the surface temperature of Venus  but also about a couple of dozen other things which have also proved to be true, such as radio emissions from Jupiter, among other things.

Matt and his jeep lands on Venus, but the jeep sinks out of sight and he and his crew get taken below the water to a Venerian civilization consisting of all female creatures requiring specialized diplomatic skills to handle them. Matt and his crew rescue the space ship Astarte which crashed over a hundred years earlier on the planet, about 1975, which makes that another good guess for Heinlein, since by that time the USA had sent a manned expedition to the Moon, and could have made a manned trip to Venus if they had wished to. But, you see, it turned out Velikovsky was right, so they couldn't. When the first unmanned probe to Venus burnt up in the atmosphere, exactly as Velikovsky predicted, I cheered.