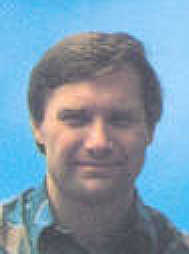 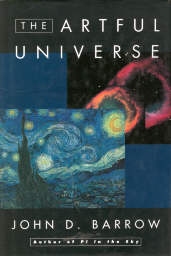 The author begins with a story about T. S. Eliot that was told by John Naughton. A London taxi driver recognized his fare as the famous poet and explained, "I've got an eye for a celebrity. Only the other evening I picked up Bertrand Russell, and I said to him, 'Well, Lord Russell, what's it all about?' and do you know, he couldn't tell me."

I picked up this book by John D. Barrow on December 2, 1997 expecting to discover "What's it all about?" — the universe and art, that is — and when I set the book down over three months later, do you know . . . well, you guessed. But Barrow did tell me a lot about his universe, one that is full of science and art.

The first line of his Preface goes:

[page vii] Life, like science and art, is a theory about the world: a theory that in our case takes bodily form.

This sentence speaks worlds for the approach that Barrow takes to his two subjects: science and art. He calls science objective and art subjective. He treats them both subjectively, providing data and equations for scientific facts, and photographs, many in color, for artful facts. Science, art, and life are theories, theories that provide reasons for why things are so to the thinking person, the scientist to whom Barrow speaks in this book. If one understands this skew, one will not be surprised to find a book full of reasons why things are thus and so. Take astrology:

[page 161] The reasons for the rise of astrology in the ancient world are not known with certainty, and probably differ from one civilization to another. The Egyptians believed that the stars were another world where our spirits rested after death.

Then he goes on to discuss the celestial motions and how they came to be used for navigation over the seas. If he had instead asked himself the question, "What are our souls resting for?" and waited patiently for an answer, he might have come to understand that our souls are preparing for a new incarnation, and they will carefully choose the exact configurations of stars and planets of which they are currently a part to suit their plans for their next bodily incarnation. As each of us did for this one. This knowledge is directly available to each person who understands that it was not a belief of the Egyptians that such was so: they experienced the spiritual world directly, including the spiritual beings who inhabit the planets and star fields we call constellations. It is a testimony to how much we have fallen into the material world since then that Barrow must say, "The Egyptians believed..."

Theories of art, like all theories, are theories of theories, those hidden theories that color our cognitive field so that life takes on the tint of the hidden theories. La Vie en Rose is a famous Parisian song, but no amount of theory and reasons could explain why the song is so beloved. Live in Paris for a couple of years, and you will learn why: the sky has a perpetual pink tint, such that, in Paris, life is really like a rose. Those hidden theories that tint the way we behold our life Thomas Kuhn called paradigms in his classic book, The Structure of Scientific Revolutions, in 1962.

Here's a hidden theory at work:

[page 101] Even where artistic representations are heavy with artificial symbolisms of a religious or romantic kind, one can often find a background resonance with echoes of our innate emotions.

There are no innate emotions — the idea that there are identical emotions in every human being constitutes a hidden theory. In The Emotional Brain Joseph LeDoux points out there are many problems with the basic emotions theory, by which he means the evidence is against the existence of innate emotions. If emotions are the re-triggering of physical body states that were experienced and stored before the age of five, then there are no innate emotions, only individual emotional histories. [Panacea! ARJ] The famous psychologist William James seems to agree in this passage from his Principles of Psychology:

The universal conscious fact is not that feelings and thoughts exist but I think and feel. No psychology, at any rate, can question the existence of personal selves . . . . The only states of consciousness that we naturally deal with are found in personal consciousness, minds, selves, concrete particular I's and you's.

In another place Barrow says:

[page 150] Whereas other nations in the region had strong astrological practices, and made a habit of worshiping the Sun and the Moon as divinities, this practice never seemed to have arisen among the Jews.

This last statement is interesting in light of Rudolf Steiner's observation that Moses worshiped a Moon God, Jahve. Steiner mentions that Moses did not state this openly, which can explain why a modern scientist might think the ancient Hebrews did not worship the Moon. Why might one take Steiner's word over Barrow's in this matter? If it were a question of the composition of the spectral lines from a supernova, I would take the materialistic scientist's word for the results of his observation of the lines in his telescope and spectrometer. For questions that involve realities in the spiritual world, I would choose a scientist of the spirit who uses the finest instruments known to humanity for his research: his human body, mind, soul, and spirit.

In a special display of artlessness, Barrow places this uncredited quote at the top of Chapter One:

Arguments against new ideas generally pass through three distinct stages: from 'It's not true' to "Well, it may be true, but it's not important." to "It's true and it's important, but it's not new — we knew it all along." Unpopular Wisdom

The similarity of this quote to a passage in Pragmatism by William James is striking:

[Lecture 6, page 131]I fully expect to see the pragmatist view of truth run through the classic stages of a theory's career. First, you know, a new theory is attacked as absurd; then it is admitted to be true, but obvious and insignificant; finally it is seen to be so important that its adversaries claim that they themselves discovered it.

This clears up the matter of who originated the idea for now. Of course, James calls them the three "classic stages," so there may an earlier source for him, but I think it likely that William James simply put into words what "everybody knew," what was obvious, but no one had said so clearly before.

Beautiful photographs, beautiful theories, and intricate webs of scientific facts, data, and equations fill the universe of Barrow's mind and this book. One would hope that one day he will also add love to his vision of what it is to be a human being in this artful universe.