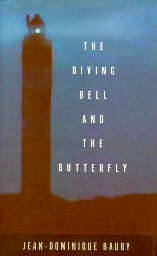 
The Diving Bell and the Butterfly
by
Jean-Dominique Bauby
Published by Alfred A. Knopf in 1997

With "locked-in" syndrome due to some event in his brain stem, Bauby is completely paralyzed, able only to move his left eye and blink. Otherwise completely rational, this former editor of Elle, a prestigious Parisian magazine published in twenty plus countries, is completely bed-ridden, breathes through a respirator [diving bell], and is fed through a feeding tube. Using his eye blinks, he is able to communicate and write this book.

A wonderful story - one that works on many levels that an ordinary story doesn't work, because it's so real. Such as when he calls the cripples at his hospital "tourists" because they'll get to go home eventually, whereas he's apparently in for the duration. Or when he tells about his imaginary eating in the best restaurants in Paris and calls it "simmering memories."

[page 36] Once, I was a master of recycling leftovers. Now I cultivate the art of simmering memories. You can sit down to a meal at any hour, with no fuss or ceremony. If it's a restaurant, no need to call ahead. If I do the cooking, it is always a success.

Best part is "indigestion is never a problem." Poignant. Having René Auberjonois reading it with his sonorous french accent is a wonderful touch - one can easily imagine that one is hearing the author Bauby himself talking inside his head. I first listened to this book on audio tape due to an error in ordering, then later I read along with the audio tape and was able to notice minor changes between the text and the tape, such as substituting on the tape the word "cocoon" for "diving bell". Another interesting juxtaposition is the sentence, "The French team played like pigs." in the book and on the tape it came out, "The French team played like sick cows." Must be an idiom I'm not familiar with that allows the substitution of sick cows for pigs.

He recalls the story of going on holiday with his girl friend to Lourdes and getting in a half-mile long line full of cripples waiting for the Madonna to appear and cure them. He told her he wouldn't stand in the line, and she responded that it would do a sinner like him a lot of good. His response was prophetic.

[page 64] "Not at all. It could even be dangerous. What if someone in perfect health happened to be here when the Madonna appeared? One miracle, and he'd end up paralyzed."

Years later he becomes the most crippled of any of the cripples when a brain lesion severed his brain functions at the brain stem and places him into his "locked-in" syndrome. He is only able to move his head a bit from side to side and blink his left eye. With that eye he "speaks" to visitors by having them go through the frequency order of the french alphabet ESARIN TULOMD [ETAOIN SHRDLU is the frequency order of the English alphabet] one letter at a time until he blinks and then they go on to the next letter. Using that tedious method, over the course of a summer, he is able to dictate this book.

[page 16] Since the demarcation line [of his paralysis] runs across my mouth, I can only half-smile, which fairly faithfully reflects my ups and downs.

In the following section, Bauby relates his imaginary relationship with the Empress Eugénie, wife of Napoléon III, whose marble bust graces the corridor of the Naval Hospital, Berck-sur-Mer, whose patroness she is. One day as he stares in her stained glass image, he notices an unknown face in the reflection. With a twisted mouth, damaged nose, one eye sewn shut, the other wide open, the floating head seems "to have emerged from a vat of formaldehyde."

[page 25] For a moment I stared at that dilated pupil, before I realized it was only mine.

Whereupon a strange euphoria came over me. Not only was I exiled, paralyzed, mute, half deaf, deprived of all pleasures, and reduced to the existence of a jellyfish, but I was also horrible to behold. There comes a time when the heaping up of calamities brings on uncontrollable nervous laughter - when, after a final blow from fate, we decide to treat it all as a joke. My jovial cackling at first disconcerted Eugénie, until she herself was infected by my mirth. We laughed until we cried. The municipal band then struck up a waltz, and I was so merry that I would willingly have risen and invited Eugénie to dance, had such a move been fitting. We would have whirled around miles of floor. Ever since then, whenever I go through the main hall, I detect a hint of amusement in the empress's smile.

Bauby had often read Alexander Dumas' The Count of Monte Cristo, the last time was shortly before his stroke, during which he had thought a lot about Grandpapa Noirtier, the first character in literature with "locked-in syndrome". He toyed with the idea of writing an updated story of the character. Suspecting now that his attempted affront to the great novel somehow led to his current condition, he says:

[page 48] To foil the decrees of fate, I am now planning a vast saga in which the key witness is not a paralytic but a runner. You never know. Perhaps it will work.

In another poignant reminder of how a severe handicap can drastically change one's life, here is Bauby's recollection of the Father's Day he spends with his children Théophile and Céleste:

[page 70] Today is Father's Day. Until my stroke, we had felt no need to fit this made-up holiday into our emotional calendar. But today we spend the whole of the symbolic day together, affirming that even a rough sketch, a shadow, a tiny fragment of a dad is still a dad.

In his room he receives mail and his nurses hold the letters spread out before him so he can read them. He takes notice of a curious phenomenon that others would do well to notice: if one is superficial in conversation about one's thoughts, others will not reveal the depths of their thoughts.

[page 83] Some of them are serious in tone, discussing the meaning of life, invoking the supremacy of the soul, the mystery of every existence. And by a curious reversal, the people who focus most closely on these fundamental questions tend to be people I had known only superficially.

Near the end of the book, Bauby is reduced to examining the contents of the half-opened purse of his stenographic assistant, Claude. Napkins, folded franc notes, metro tickets, keys, "keys" he thinks:

[page 131-132] Does the cosmos contain keys for opening up my diving bell? A subway line with no terminus? A currency strong enough to buy my freedom back? We must keep looking. I'll be off now.

Thus he ends the book. On the book jacket it says, "Jean-Dominque Bauby died two days after the French publication of his book. The Diving Bell and the Butterfly is a lasting testament to life."

“The Diving Bell and the Butterfly” (2007) I read and reviewed this book in 1999. In recent months this review had zoomed to the top of my most popular webpages. I wanted to see how a movie maker would treat a first-person narration of a biographical book by someone who is only able to communicate by moving one eyelid. Jean-Do as he was called by friends was a 42-year-old vibrant publisher of Elle in Paris when one day he was out driving his new convertible with his son and became to stutter, then lean back as he stopped the car, look up staring into the sky, and hardly moved another muscle the rest of his life. The director chose to show us Jean-Do’s world through his dim and out-of-focus eyes and the effect was an eerie versimilitude that was riveting. Read this book and watch this movie. A heroic tale of a foreshortened life.