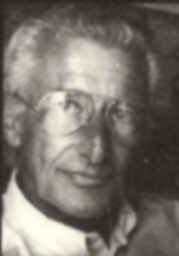 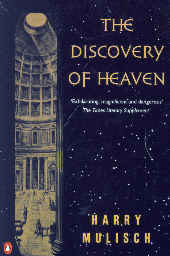 A READER'S JOURNAL
The Discovery of Heaven
by
Harry Mulisch

A wonderful novel — one that comes with a wonderful story of how I came to have the book. It was a gift from Tonny Vaes, a friend in the Netherlands, who went into a large bookstore in search of a book to present to me as a gift upon our first meeting in person after a year or two of communicating via E-mail over the Internet. He asked the clerk for a book that must be written by a Dutchman, translated into English, and must be written on a non-trivial subject, "a philosophical novel". This is the book she suggested, and it fits Tonny's specifications exactly. A very enjoyable and thought-provoking read — it includes lots of references to local areas of Amsterdam that, after my trip there, I can relate to.

Mulisch lives in Amsterdam and writes on philosophical issues in an intriguing and compelling style, which is a requirement to pull me through a book of 730 pages, and pull me it did. Max Delius and Onno Quist meet and become instant friends, each one a philosopher in his right. Max, the astronomer, is studying the far reaches of the physical universe, and Onno, the polyglot, is studying the far reaches of human languages.

The story of Max's apolitical sexual escapades and Onno's asexual political escapades fill the plot lines of the book with twists and turns that would make a juggler dizzy, but the real fun for me was in the metaphoric webs spun so ingeniously by Mulisch. Here are some examples:

[page 9] Because of all that genetic fiddling about, I've still got a loose bobbin inside me, like a loom.

[page 23] Happiness was not freedom from chains, but release from chains. Chains were an indispensable part of happiness!

[page 30, on not having a degree] You're one of those fools who think achievement is more praiseworthy than talent.

[page 39] "Have you ever noticed," he said, "that the area of Protestantism coincides with the area covered by the polar ice in the Ice Age?"

[page 66] "Have you ever wondered," Max asked, "why it is that you find a chair which someday else has just been sitting warm, but never your own chair, after getting up for a minute?"

[page 185] Max knew that Onno always exaggerated in the direction of truth, never in the opposite direction.

[page 238] He now suddenly saw Ada's parents: they stood apart to the group, looking rather out of place without merging with it, like fat rings in a soup.

[page 257] Max then told them that Dickens gave a dinner for his friends every Christmas Eve, in which he hired a tramp to stand outside in the snowstorm under the window and shout every few minutes, "Brrr! How cold it is!" — so that the people inside enjoyed the warmth and the goose even more.

— In the past things were easier for us.

— When we simply used to address people directly as the need arose.

— But we stopped doing that after the creatures got the idea that it was not our voice they were hearing but their own inner voice. Of course, we couldn't stand for that kind of pickpocketing.

[page 397] The oldest thing of all is the present, because there's never been anything else but the present.

[page 419] In politics your potential archenemy is always in the first row of the auditorium.

[page 435, on looking at Ada's eyes while she was in a coma] Together they looked at the deep brown, almost black, eye that saw nothing — as little as the eye that seems to form in the sky in a total eclipse of the sun.

[page 485, on Quinten's observing spiders in their webs] And one evening he suddenly saw that the lucid structure of their webs in a certain sense was a geometrical representation of their repulsive bodies, with the eight hairy legs — a kind of transparent extension of it, just as algebra is the abstraction of mathematics.

And just as Quinten is the extension of Max/Onno, Quinten embarks on a quest to find Onno and upon finding him, enlists Onno's aid in finding the stone tablets on which the Ten Commandments were written by God. The game is afoot, and soon Quinten and Onno are stalking the San Lorenzo Chapel in Rome in search of their treasure.

Will QuQu and Onno find their tablets?

Will Ada come out of a coma?

Will Max discover the origin of the universe?

The answers to these and many other questions await the reader as they puzzle through this philosophical Easter Egg Hunt that Mulisch has concocted for the curious among us. This Dutch novelist is as original and imaginative a writer as the two Italian writers, Italo Calvino and Umberto Eco. For an enjoyable walk in Mulisch's fictional woods, pack a thermos and a bag of bread crumbs, and prepare yourself for The Discovery of Heaven.