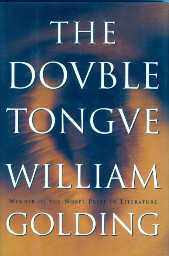 The Double Tongue
A Novel

Published by Farrar, Straus, Giroux in 1995
A Book Review by Bobby Matherne ©1998

During the time of Julius Caesar in Rome, a young virgin in Greece, living in a small village near Delphi, was chosen to be a successor to the Pythia or Oracle. Arieka, as she was called, was to be the Third Lady, essentially an oracular lady-in-waiting, to be available to replace the Second Lady after her ascension to First Lady, the seer who spoke for the gods.


Arieka spent her time reading in the Bookroom, one small part of which contained Roman books written in Latin. The room was therefore called by the Latin name for book, librarium. Her mentor, Ionides, told her that Latin is, "a language with too much grammar and no literature." That is certainly true of Latin today. Latin's sole remaining uses are for naming things, like plants in botany, drugs in medicine, and legal concepts in law.

When the First Lady and Second Lady died within weeks of each other, Arieka was pressed into service as the Pythia. Immediately she had to sit in the seat, breathe the gases from the hole in the cliff, and burn laurel leaves to inhale and go into a trance. At first Ionides gave his carefully prepared answers to important political questions of the oracle, using intelligence he gathered from the Internet of the time: carrier pigeons from other major oracles. Soon Arieka began to give oracular answers on her own in hexameter verse, as the Pythias in the distant past had done.


This book is a short book, only 164 pages, a brevity due to the sudden death of the author while the book was still in its second draft. Even so, the book has a coherency and completeness that, in conjunction with its brevity, makes for a fine, quick, and enjoyable read. It is filled with interesting vignettes of life in ancient Greece, especially in the temple of Delphi and its environs, which is the reason I bought the book.


In addition Golding adds a sprinkling of his own insights into diverse subjects. An example is when during a procession of international dignitaries to Delphi, he has Arieka say:

[page 66] The back of a crowd, according to Ionides, is where the true nature on an international relationship may be studied in little.

For the fun of a time machine trip back to ancient Greece and a view behind the scenes of the Temple of Delphi, add this book to your Bookroom or your librarium.